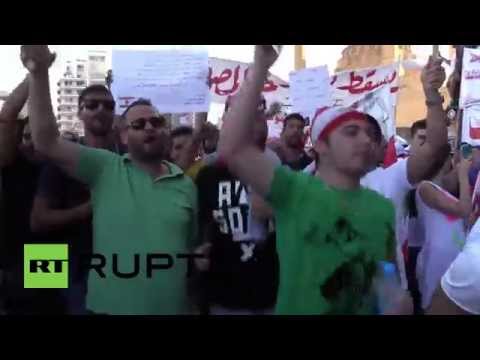 Lebanese protesters today gave the government a 72 hour ultimatum to meet their demands or face further protests on Tuesday. The demands include the resignation of Environment Minister Muhammed El-Machnouk and a permanent, sustainable solution to the garbage crisis, which initially took the people to the streets.

Earlier today, up to 250,000 protesters turned up at Martyr’ Square, where they continued to protest for a sustainable solution to the country's mounting garbage problem.

The demands, published on the Tol3et Re7atkom (You Stink) Facebook page, were shared on Twitter by Lebanese blogger and activist Joey Ayoub, who is also a Global Voices Online author and a You Stink movement member:

Reminder of #طلعت_ريحتكم demands. YouStink movement has given them 72h to meet them, or Protest on Tuesday. #Lebanon pic.twitter.com/xPME2twJBr

Rami Khouri described the demands as “reasonable” but warned that failure to ensure them would mean the end of the You Stink movement. He warns:

Success of these reasonable demands will boost power of this protest movement and expand its base. Failure is fatal. https://t.co/734TAzl7c6

And Mohamad Najem gives a more modest estimate of the turn out:

100K protestors went down to the street, it's a historic victory says @Ma3louf, asked people to go to Martyr Square #youstink #طلعت_ريحتكم

Regardless, the Secular Club of the American University of Beirut shares those photographs from today's protest, saying “no picture will do justice to the size of the crowd here.”

No picture will do justice to the size of the crowd here. #طلعت_ريحتكم pic.twitter.com/DAuPz7Pc46

And back to Battah, this was also the most eco-friendly protest he has ever witnessed:

As crowd clears, volunteers collect a pile of bottles for #recycling. This also most eco-friendly protest I've seen pic.twitter.com/0G1g0ASn0U

According to Najem, Lebanese protesters stayed put, even after the protest officially ended and organisers announced their demands. He shares this video:

You Stink has broadened its focus beyond officials’ mishandling of the refuse problem following the closure of the country's largest landfill in July. Members are now calling for the government's resignation, an end to corruption and fresh parliamentary elections, among other demands. Lebanon, already suffering from a poor infrastructure and daily electricity cuts, has had no president for over a year. In 2009, its parliament extended its term until 2017, with no elections, citing instability as a reason.