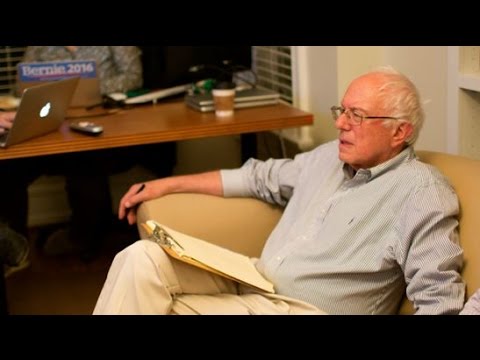 Sen. Bernie Sanders took on the entire top-tier of the GOP field from his Twitter account on Thursday night… and for many, he won the debate hands down. (Photo: CD Collage / Fox News / @BernieSanders)

As Fox News hosted the first full debate between the “top-tier” candidates of the Republican presidential candidates on Thursday night, Sen. Bernie Sanders took in the show with an active social media hashtag to offer his reflections on the GOP discussion—remarking on their responses, making note of what issues they avoided or refused to discuss, and letting his 2016 rivals know what it might look like to #DebateWithBernie.

Ironically, at least according to the Boston Globe‘s Nik DeCosta-Klipa, it was Sanders who won the GOP debate—at least on Twitter.

Ahead of the evening’s debate—which took place at the rather aptly named Quicken Loans Arena in Cleveland, Ohio—Sanders said that for poverty-stricken families, low-income workers, and the middle class to enjoy the Republican’s message it would require a creative imagination.

“Listen closely, and this is what they will tell you,” Sanders advised. “They want to give more tax breaks to millionaires and billionaires at a time when the rich are getting much richer. … Essentially, when you watch that debate, just imagine if you are one of the wealthiest people in this country and extremely greedy and selfish, and you’re going to have 10 candidates more or less talking about your needs and not the needs of the working people.”

And he was essentially correct. When the talking was finally over and the debate concluded, Sanders tweeted:

It’s over. Not one word about economic inequality, climate change, Citizens United or student debt. That’s why the Rs are so out of touch.

Read the complete catalog of Sanders’ responses to Thursday’s debate on Twitter:

And the reactions under the hashtag created a chorus of people saying that Sanders clearly took the night:

According to Twitter, the hashtag #DebateWithBernie was used 56,748 times and @BernieSanders was mentioned 59,935 times during the debate.

This work is licensed under a Creative Commons Attribution-Share Alike 3.0 License
—–