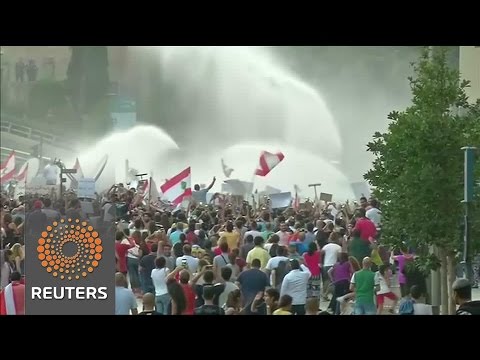 The master narrative of much Western journalism is that the youth protests of 2011 have been replaced by civil war and terrorism. But while there is plenty of both in Syria, Yemen, Iraq and Libya, in fact here and there in the region youth protests have popped up from time to time–in Turkey, Yemen, and now Beirut and Baghdad– where they have shaken up politics. The common denominator is that people are tired of their governments not providing services or working properly. While the US focuses mainly on Daesh (ISIS, ISIL), for many Arab youth it is a symptom of incompetent, corrupt and sectarian government, not a phenomenon in its own right.

In Beirut on Saturday, thousands gathered on at Martyr’s Square and Riyadh Sulh Square, shouting “You stink!” as a way of protesting the paralyzed Lebanese government’s inability to collect the garbage. (Even where trash is removed, it is often dumped in streams or the ocean or illegal landfills, becoming a threat to public health). The crowds also chanted against the “sectarian” character of the government, which has lacked a president for the past year.

Lebanon barely has a government in the way that most people think of a government. American Libertarians would be very happy with it. But most Lebanese want their government actually to provide them with services, including garbage collection. Some of the paralysis comes from Lebanon’s peculiar “confessional” or religious-sectarian from of democracy, in which people are forced to vote on the basis of religious identity. The protesters critiqued this system and its dysfunction.

This weekend in southern, Shiite cities of Iraq, demonstrators also gathered in the thousands. Some of them are protesting the hold that sectarian parties have over the state. Others are protesting unemployment or lack of electricity (it has been scorching hot in Iraq in the past month, and frequent electricity outages have left people without air conditioning, which there is often a matter of life and death.) The Baghdad demonstrations of this movement have forced Prime Minister Haydar al-Abadi to attempt to streamline the Rube Goldberg Iraqi government so as to allow him to attempt to address the problems in a systematic way.

The demonstrations have never really gone away, though in some times and places it is very dangerous to protest publicly. The Houthi tribal militia that staged a coup in Yemen from September of last year, for instance, has acted in brutal and high-handed ways that dismayed the youth activists who had gathered in 2011 at Change Square in Sanaa to demand the resignation of then president Ali Abdullah Saleh. Last January when the Houthis forced out the elected president, Abed Rabbo Mansour Hadi, some 10,000 youth marched in protest in downtown Sanaa. I thought to myself that it was very brave, using urban crowd protests against a tribal militia. The latter was unlikely to listen, but the crowds showed that they could not be cowed.

In Beirut, the protests are having a political effect. If they go on, perhaps the almost fuedal power-wielders will have to engage in some real politics.