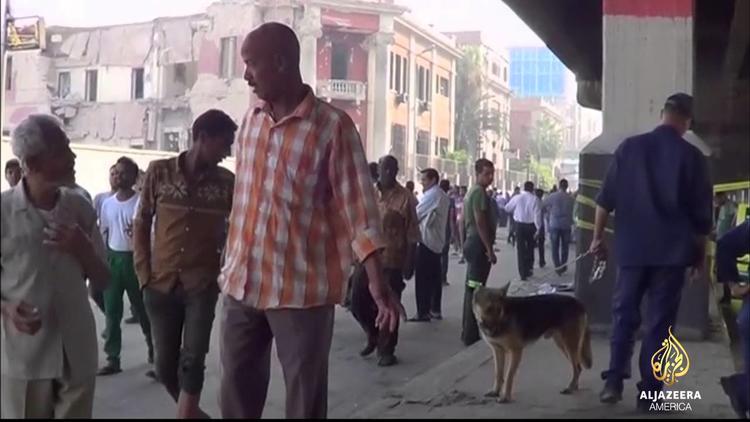 An enormous explosion damaged a building housing secret police in a northern district of Cairo (Shubra al-Khayma) on Thursday early morning, wounding nearly 30 persons, including 6 police personnel, who were transferred to hospital for treatment.

Two different branches of Daesh (ISIS, ISIL) claimed responsibility, the main organization and its Sinai affiliate. One of the claims of responsibility said it was in revenge for the execution of 6 accused fundamentalists in March.

The Egyptian government has gone on an execution spree. It is not clear that the six accused of involvement in a rash of killings of police and military personnel were actually guilty, since Egyptian courtroom procedure was apparently borrowed from the Stalin of the 1930s. The six, apparently members of the Muslim Brotherhood, stood accused of planting a bomb in the village of Arab-Sharkas in Qalyubiya Province in the Nile river Delta. It killed two officers who tried to defuse it. But they were also accused of killing an officer in Cairo and murdering 6 soldiers, and of killing another two officers in clashes during a demonstration.

Beneath the outward calm of Egypt, there is a low-intensity ongoing conflict out in the villages of the countryside between the repressed Muslim Brotherhood (some of whom have now migrated to more radical organizations) and the Egyptian army and state security police. In the back pages of Cairo newspapers, in articles that mostly don’t make it into the digital editions, there are constant reports of assassinations of police and military personnel, small bombings, etc.

President Field Marshall Abdel Fattah al-Sisi announced a “war on terror” shortly after he made a military coup in summer of 2013, by which it turned out he meant he intended to brand the former ruling party, the Freedom and Justice Party of the Muslim Brotherhood, a terrorist organization and relentlessly marginalize and disadvantage its members. Since the party was elected into office both in parliament and then in the executive in 2011-2012 after the youth revolution against Hosni Mubarak, it was unacceptable to party members that their leadership was simply overthrown and arrested. Then came the mass death sentences passed on any party activists who seemed unwilling to acquiesce in the coup. Two years ago in mid-August the military forcibly dispersed Muslim Brotherhood members staging a large sit-in in front of the Rabia al-Adawiya Mosque, during which hundreds were killed. Some put up violent resistance to the army, but many of the dead were victims of poor crowd control technique and use of live ammunition.

As was easily foreseeable, this violent suppression and complete marginalization of the Muslim Brotherhood, which probably has the support of some 20% of the population (though perhaps it is less given the Draconian government crackdown) has produced terrorism against the state security police, with major bombings in Mansura and in Cairo across from the Islamic Art Museum.

Al-Sisi, Mussolini style, is staking a claim on being able to make the trains run on time, with his expansion of the Suez Canal a major demonstration project in his attempt to improve substantially the country’s falling-apart infrastructure. The Egyptian state was losing billions in tolls because for part of the Suez Canal, two-way traffic was impossible, and ships had to wait long hours for their turn. Dredging another lane wasn’t all that hard (Egypt just pulled it off in only a year), so that Mubarak never bothered is a testament to how little the old elite cared about the country. They couldn’t even put themselves out to do a little work that would bring in billions in further tolls. (Now that the traffic is two-way and the canal can be passed in half the time, Egypt can charge container ships more per container. By 2023 it is estimated the extra tolls will be worth an extra $5 billion a year, which for a poor country like Egypt is a windfall).

But another money-earner for Egypt had been tourism, which brought in billions before the 2011 revolution, and which is a shadow of its former self. Although the Shubra bombing was intended to rattle the state security police and the regime, it had the subsidiary goal of scaring away the tourists (who are already largely spooked). Over 14 million tourists visited Egypt in 2010, bringing in $12 billion. In 2014, some 10 million tourists brought in only $7.5 billion (Eastern Europeans now predominate, who spend much less than the Western Europeans and Middle Easterners who used to comprise the bulk of the tourists). For the 1 in 7 Egyptians employed in the tourism sector, this fall in revenue translates into a pay cut of almost 50%! Thursday’s bombing will certainly affect September’s bookings.

Egypt is expected to grow 4.5% this year, but a lot of the growth has been spurred by aid from the Gulf oil states (which fear the Muslim Brotherhood as a radical, populist force and were happy to fund al-Sisi’s coup). That Gulf aid is expected to plummet with the falling oil prices, which are also hurting Egypt’s stock market.

The wages of authoritarianism, repression and a politics of fear are public insecurity. While Cairo’s biggest security challenge is in the rugged, hard-to-control Sinai peninsula, terrorism has returned to the Nile Valley after a decade-and-a-half absence in the late Mubarak period and the year of Mohammad Morsi’s presidency. This is Egypt’s grim new normal, as the ideals of openness, transparency and accountability of the 2011 revolution have been taken out and shot to death even more thoroughly than the prisoners of conscience.