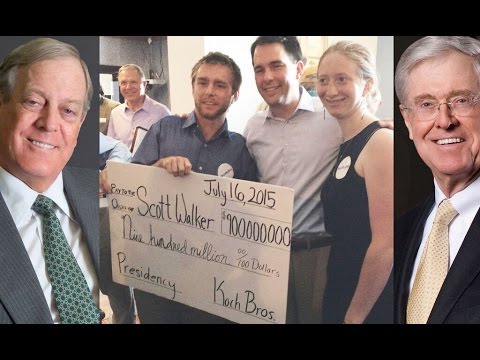 A Wisconsin Supreme Court ruling on Gov. Scott Walker’s campaign practices clears the way for state candidates to work more closely with legally independent political groups and their enormous war chests. The big unanswered question is how ripples from the case might spread beyond the state’s borders.

The ruling could spark attempts to overturn laws in other states that restrict such coordination. It may also embolden outside groups in the 2016 presidential campaign to edge closer to their favored candidates. And if the Wisconsin decision were to be appealed to the U.S. Supreme Court, it could give justices who already have loosened the reins on political money a chance to go even further.

A ruling by the nation’s highest court upholding the Wisconsin decision “could mean the evisceration of campaign contribution limits nationwide,” said Daniel Weiner, an attorney at the Brennan Center for Justice at New York University.

“This could become the vehicle for the next Citizens United,” said Weiner, referring to the 2010 U.S. Supreme Court case that helped feed an explosion of super PACs and so-called dark-money groups.

The Wisconsin decision on July 16 had its roots in a secretive investigation conducted by a special prosecutor. The prosecutor was reviewing allegations that, during Walker’s 2012 fight against a recall, his campaign urged donors to contribute to so-called dark-money conservative groups and then coordinated strategy with those groups, including the Wisconsin Club for Growth.

Because these outside groups can accept dollar donations of any size, such tactics essentially would have sidestepped limits on how much individuals can donate to candidates. As in federal election law, Wisconsin’s rules against coordination aim to prevent exactly that kind of subterfuge.

But the Wisconsin court ruled that the state restrictions were “unconstitutionally overbroad” and that such groups have a right to express their views and do so in conjunction with candidates. They can run ads supporting or bashing a candidate, as long as the ads don’t explicitly advocate a vote for or against, the court said.

The justices ordered an end to the investigation of Walker’s campaign activities, a welcome development for the governor as he bids for the 2016 Republican presidential nomination.

In recent years, the U.S. Supreme Court has in several cases ruled that free speech guarantees trump restrictions on campaign money. The changes have roiled election finance, helping to draw moneyed interests as well as wealthy neophytes into the game, and have given campaign donors unprecedented individual clout.

Among other things, the court has removed aggregate limits on contributions to federal candidates and opened the door for unions and corporations to spend unlimited amounts on elections. In the Citizens United case, the court paved the way for new entities known as super PACs — independent advocacy groups that can accept contributions of any dollar size and spend unlimited sums supporting candidates so long as they don’t work closely with the candidate’s campaign.

Easing the barriers to coordination would seem to be at odds with the thinking behind the court’s recent rulings on campaign finance. Justice Anthony Kennedy, who authored the Citizens United opinion, said big campaign contributions to outside groups aren’t as likely to “lead to, or create the appearance of, quid pro quo corruption” as those made directly to a candidate. However, if both kinds of contributions are effectively used the same way, the distinction drawn by Kennedy would no longer exist.

The Wisconsin case split 4-2, with the court’s four conservative justices in the majority, attracting criticism that two justices should have recused themselves because their electoral campaigns were supported by the same pro-Walker groups at issue in the case.  The court has become increasingly politicized in recent years.

Asked if the decision would be appealed to the U.S. Supreme Court, an official with the Milwaukee County District Attorney’s office referred questions to Francis Schmitz, the special prosecutor. Schmitz didn’t respond to requests for comment.

James Bopp, one of the conservative attorneys who brought the Citizens United lawsuit, said it would be “very beneficial if the Supreme Court would hear a case like the Wisconsin case, because they would impose limits on the ability to use campaign finance laws to restrict people coordinating with candidates on things that are not campaign related.”

Bopp said a high court decision would have more impact on state laws than on federal practices, because some states have rules that go beyond U.S. restrictions on campaign coordination.

Dan Backer, the conservative attorney who helped bring the 2014 McCutcheon case in which the Supreme Court removed aggregate limits on direct contributions, said he expects challenges to coordination limits in other states.

“Challenges take time and money, but they are coming,” he said. “State laws are far more susceptible to challenge on constitutional grounds, largely because of the way in which they are written … it’s rare to have a well-developed state law regulating speech that is thoughtfully constructed with the Constitution in mind and not overly broad.”

Before the Wisconsin court ruled in the Walker case, the Wisconsin Club for Growth and its director asked the U.S. high court to shut down the state investigation on constitutional grounds. The court declined to take the case, which may signal its reluctance to review the Wisconsin decision.

If the special prosecutor does try to take the matter to the Supreme Court, it’s possible his appeal would focus solely on the alleged conflicts of interest of some of the Wisconsin justices, which would make it difficult for the Supreme Court to weigh in on the free speech issues.

Jessica Levinson, a professor at Loyola Law School in Los Angeles, said the Supreme Court is unlikely to step in because there’s no disagreement on the issue among federal appeals courts.  Even if it did take up an appeal, she said, it’s doubtful Justice Kennedy, the swing vote on campaign finance, would favor removing more restrictions on political groups.

Related stories: For more coverage of politics and lobbying, read ProPublica’s previous reporting on the rising influence of single donors, an imploding super PAC and how the gas tax explains Washington gridlock.