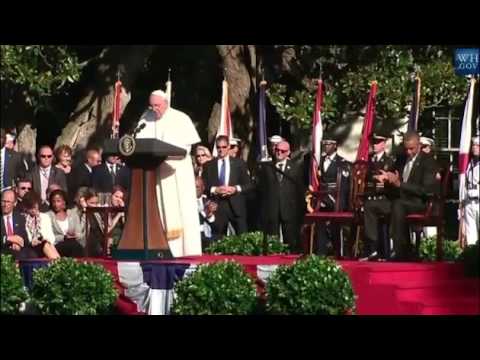 In his White House address on Wednesday, Pope Francis again brought up the urgent issue of global warming,

climate change is a problem which can no longer be left to a future generation. When it comes to the care of our “common home”, we are living at a critical moment of history. We still have time to make the changes needed to bring about “a sustainable and integral development, for we know that things can change” (Laudato Si’, 13).

He linked climate change not only to the general welfare of people on earth but especially to the fate of the “excluded,” i.e. the poor. He seemed to be saying that the poor will suffer even more from climate change than the rest of humanity, and everything indicates that he is right about that.

One of the problems with an enormous organization like the Catholic Church, encompassing 1 billion out of our 7 billion human beings, is that it is hard even for the top leader to get the word out to the faithful. And then, of course, the faithful often drag their feet or disagree with church policy. Pope Francis’s two predecessors both opposed Bush’s invasion and occupation of Iraq, but polling suggested that only about a fifth of American Catholics even knew about that. About half of Catholics vote Republican in the US, and that section of the church may not have been so eager to circulate the anti-war message from Rome.

So can Pope Francis get the word out to US Catholics? And will they do something practical about climate change?

According to Pope Francis, that 6 to 7 percent of the diocese’s portfolio may as well be invested in brothels or in abortion clinics. Climate change will kill lots of people, after all, and the Church is all about affirming life. It will also diminish the quality of life for a lot of people, with extreme weather events and more severe droughts in some parts of the world.

So, will the dioceses divest from fossil fuels? Will they announce that they have done so and pressure other leaders of society to do so? Let’s see if there is practical action. (By the way, divestment isn’t always easy. If you put your money in mutual funds, there is often not a means to separate out where it goes. And even if you have a socially responsible mutual fund, it probably invests in the banks that fund the fossil fuel corporations. But, you can try.)

Churches emit carbon dioxide just as most American buildings do. If they are heated by coal, they may be emitting quite a lot of CO2. Church leaders know this, and some are swinging into action. Saint Eugene Catholic Church in North Asheville, NC, is putting 146 solar panels on the roof. The panels will generate 22% of the church’s electricity. Some 55% of North Carolina’s energy is generated by coal, which is extremely dirty and polluting. 34% is nuclear, which is low-carbon. So this church is actually reducing its carbon emissions quite significantly.

Churches all over the country are doing the same thing Saint Eugene is, and their cumulative effect could be significant. If enough join in. Studies have shown that solar panels are like yawning. If a neighbor puts them on, you are more likely to do so, as well. So, not only are the churches putting on panels, but that very act may encourage home-owning parishioners to do so as well.

Churches often also own vehicles, and they could go for electric ones or plug-in hybrids, another way of cutting down on their emissions.

The Catholic Church has one leg up on a piece of practical climate action: meatless Fridays. If 80 million Americans avoid beef on Fridays and during Lent, that actually also has a significant positive climate impact. In fact, Pope Francis should think about extending the number of meatless days.

In my own view, the US government is pretty hopeless as an engine of significant carbon reduction, and the big changes are likely to be more grassroots. If they will listen to him and act, the quarter of Americans whom the pope supposedly leads could form a crucial lever in moving all Americans toward a greener and less dangerous future.

We social scientists are more interested in what society actually does than in religious rhetoric. We’ll be checking in.