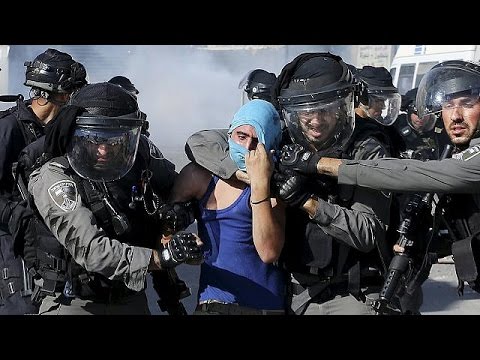 On the evening of Monday September 14, Alex Levlovich was driving back from the Rosh-Hashana Seder, the celebration of the Jewish new year, along the road that separates the Jewish neighbourhood of Armon Hanatziv and the Palestinian neighbourhood of Tsur Bahir in East Jerusalem when the window of his car was smashed by a stone.

Levlovich was so startled that he suffered a heart attack and lost control, swerving and hitting a post. Two passengers in the car suffered light injuries and Levlovich died.

The government of Benjamin Netanyahu is trying to paint the tragic incident as the latest in a campaign of Palestinian “popular terrorism”. But stone-throwing by Palestinian youth is a symptom of unrest in East Jerusalem that has its own reasons, many of which stem from the centre and the fringes of Netanyahu’s government and from years of neglect.

The Israeli security forces have an armoury that makes stones look, well, stone-age. Legislation to curb stone-throwing has only recently been passed, introducing draconian sentences of up to 20 years.

The new measures that the government is introducing to fight stone-throwing will now include the use of attack dogs and collective punishment as well as the use of sniper fire. They are grossly inappropriate, undemocratic and dangerous, they risk escalation and bode badly for Jerusalem and Israel as a whole.

I have written before about Palestinian stone-throwing and the Israeli government’s attempts to paint it as a deadly danger – even though it only rarely is. The measures by which the current government seeks to counter the threat of stones are more dangerous than the stone-throwing itself.

Palestinian East Jerusalem is a powder keg. Occupied and annexed in 1967, its roughly 300,000 people hold a status of “permanent resident” that can be revoked if they fail to prove that their “centre of life” is in Jerusalem.

Some 84% of its children live below the poverty line, there is a chronic lack of schools and – being devoid of approved urban plans – any construction is mostly illegal and demolition is frequent.

It is also home to the one of the most volatile religious compounds in the world, the Temple Mount. After Israel annexed East Jerusalem following the 1967 war, the Jordanian-controlled Waqf – the group that looks after Temple Mount – was given administrative authority under Israeli sovereignty. This is the status quo, which involves a balance of rights and access to the Temple Mount compound between Muslims and Jews.

Muslims retain full access to the Temple Mount, while Jews keep to the Wailing Wall as their site of worship and are allowed visit the mount as tourists but not as worshippers. Access for non-Muslims to the mount is administered by the Israeli police and is only allowed through the Mughrabi gate, above the Wailing Wall.

The administrative ban on Jewish worship is aided by a Jewish religious ban, issued by non-Zionist Haredi Rabbis as well as official state Rabbis against Jewish presence on the Temple Mount itself. This is because the exact locations of the various parts of the Jewish temple are not known and hence it’s possible that Jews may unintentionally step in sacred forbidden areas.

Over the years, this version of the status quo has been a source of tension and violence. The Temple Mount has long served as a national Palestinian symbol and Israeli infringements – or perceived infringements – have sparked violent disturbances quite regularly. In recent years several Jewish groups have been challenging this ban and in recent days the Temple Mount has become the flashpoint that threatens to set off the tinder box in East Jerusalem.

The inter-communal conflict in Jerusalem is as volatile as it is complex. However, the one aspect of it that has shown a clear and steady advance has been the framing of Palestinian violence as terrorist and the subsequent importation of West Bank counter-terrorism tactics to fight it.

One of these measure, administrative detention, that the Netanyahu government plans to expand to Israeli citizens under a controversial anti-terror law was ironically linked by the government to the need to fight Jewish terrorism following the arson attack in Duma in the West Bank in which an Arab toddler and his father were burned to death at the end of July.

In this context it is important to note the warning of Arab Knesset members that the new anti-terror law was really aimed at restricting protests by all Palestinian citizens of Israel in solidarity with Palestinians in the West Bank and Gaza.

This argument gained credence when Netanyahu visited the scene of Levlovich’s death in East Jerusalem, 48 hours after the killing and declared that: “In the state of Israel we do not accept these phenomena, and I’m not only talking about the roads to Jerusalem or about Jerusalem itself, I am talking about Galilee and about the Negev”.

There are no civil disturbances currently in the Galilee or the Negev and therefore no apparent reason for them to be mentioned. What the two areas have in common though is a large proportion of Palestinian citizens of Israel. It is difficult to assess the exact meaning of this statement. It is certainly possible that Netanyahu misspoke – but what it appears to mean is that the ever-expanding definition of “terrorism” and the ever-expanding tools of “counter-terrorism” that have already crossed over to East Jerusalem may be directed at all Palestinian-Israelis.

Indeed it has been reported that the police will consider all of the decisions made in regard to Jerusalem as applying to the Negev. The highlighting of the Negev is especially timely given that renewed efforts to engage in a largescale population resettlement of the indigenous Bedouin population there is waiting in the wings.

This is very much in line with Netanyahu’s infamous rallying call in the last election, which warned that Palestinian Israelis were “heading to the polling stations in droves” framing them as a danger to Israeli society. However this round of violence in Jerusalem ends, it risks turning paranoia into policy and the radicalisation of Israeli “counter-terrorism” will have a lasting effect on inter-communal relations in Israel.