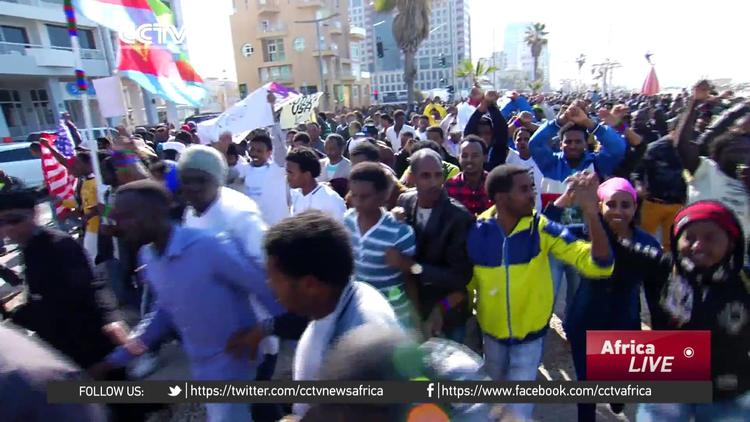 Israeli Prime Minister Benjamin Netanyahu said, on Sunday, he would not allow Israel to be “submerged” by refugees after calls for Israel to take in those fleeing Syria’s war.

Speaking at the weekly cabinet meeting, Netanyahu also announced the start of construction of a fence along Israel’s border with Jordan, according to his office.

“We will not allow Israel to be submerged by a wave of illegal migrants and terrorist activists,” Netanyahu said, according to AFP.

“Israel is not indifferent to the human tragedy of Syrian and African refugees… but Israel is a small country — very small — without demographic or geographic depth. That is why we must control our borders.”

Opposition leader Isaac Herzog on Saturday said Israel should take in Syrian refugees, recalling the plight of Jews who sought refuge from past conflicts.

Palestinian President Mahmoud Abbas also called for Israel to allow Palestinians from refugee camps in Syria to travel to the occupied Palestinian territories, whose external borders have been under Israeli control since 1967.

There is already hostility in Israel toward asylum-seekers from Africa and a concerted government effort to repatriate them.

Official figures show 45,000 illegal immigrants are in Israel, almost all from Eritrea and Sudan. Most of those not in detention live in poor areas of southern Tel Aviv, where there have been several protests against them.

‘To the Golan heights’

The start of construction of the 30-kilometer (19-mile) fence announced by Netanyahu involves extension of a security barrier to part of its eastern border with Jordan.

Netanyahu said when it was approved in June that the new fence was a continuation of a 240-kilometer barrier built along the Egyptian border which “blocked the entry of illegal migrants into Israel and the various terrorist movements.”

In its first stage, the new fence is being built along Israel’s eastern border between Eilat and where a new airport will be built in the Timna Valley.

“We will continue the fence up to the Golan Heights,” Netanyahu said.

That would take it into the Israeli-occupied West Bank along the Jordan Valley, an area which is already under Israeli military control but is viewed internationally as part of a future Palestinian state.

Israel has insisted on maintaining troops in the area in any final peace agreement, a stance completely rejected by the Palestinians who say it would be a violation of their sovereignty and merely perpetuate the occupation.

Israel also has a fence that runs along the Syrian frontier through the Israeli-occupied Golan Heights.

Those fences are in addition to the Israeli separation wall that runs through the occupied West Bank, which Israel began building during the Second Intifada, or uprising, which lasted from 2000-2005. It is considered illegal under international law.

Israel seized 1,200 square kilometers (460 square miles) of the Golan from Syria in the 1967 Six Day War and annexed it 14 years later, in a move never recognized by the international community.