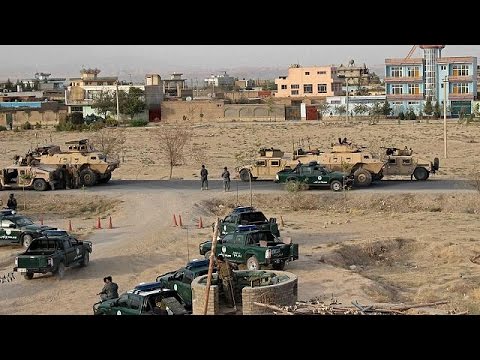 An expected Afghan government counteroffensive to retake Kunduz from the Taliban appears to have largely stalled as troops await reinforcements.”

“The citizens of Kunduz should not worry about safeguarding their lives and properties. Carry out your ordinary livelihoods in absolute security. All traders, workers, staff of hospitals, municipality, and governing bodies should continue their daily routines without any fear or intimidation.”

So read a statement attributed to Taliban leader Mullah Akhtar Mansur on September 28, hours after the militant group seized control of the northern city of Kunduz in the biggest victory of its 14-year insurgency.

But while Taliban commanders have confirmed they have received orders to treat locals well, residents of the vanquished city say they are living in fear since the takeover.

They describe the destruction of shops, government buildings, and the offices of UN agencies and nongovernmental organizations.

One eyewitness to the scene in Kunduz, speaking to RFE/RL on condition of anonymity, described the provincial capital as a “ghost town.”

“Nobody is going outside,” said the eyewitness. “A lot of shops remain closed. There is a lot of fear among the people here.”

The Taliban is infamous for enforcing a strict interpretation of Islamic law during its five-year rule from 1996-2001. And it appears to have wasted little time reimposing its will upon its return to control in Kunduz, despite its official claims otherwise.

“I’ve seen and heard of government staff being detained, beaten, and even killed,” said the witness, who spoke to RFE/RL after fleeing to the neighboring province of Takhar.

“They have ransacked shops and torched people’s homes,” the eyewitness added. “Everyone is trying to leave the city to escape the Taliban.”

The Taliban appears to be trying to use its first seizure of a major urban center in 14 years as a PR opportunity to demonstrate how much it has changed.

The group has been directed “to take care of the local community by winning their hearts and minds through good behavior and self-respect instead of bullets,” one Taliban commander told the AFP news agency.

Such an approach would contrast sharply with its history of carrying out brutal public executions and floggings, banning girls from going to school, and outlawing all forms of entertainment, including music and film.

Reports have emerged of Taliban insurgents issuing edicts against looting and the destruction of property, and visiting residents and business owners in an attempt to convince them to continue with their daily lives.

But the evident reality of retribution and violence has left many of those who could not escape hunkering down in their homes.

The UN special representative in Afghanistan, Nicholas Haysom, said on September 30 that he was concerned about reports “of extrajudicial executions, including of health-care workers, abductions, denial of medical care, and restrictions on movement out of the city.”

There have also been reports of militants forcing boys to fight with them.

An eyewitness in Kunduz said Taliban members have held public meetings with locals, urging them to “join the jihad,” or holy war. Men of all ages were encouraged, but not forced, to join the Taliban, the eyewitness said.

Amnesty International said the insurgents have exposed civilians to grave danger by hiding in residential neighborhoods.

In a televised speech on September 29, Afghan President Ashraf Ghani said the Taliban was using civilians as human shields, hampering the government’s counteroffensive to retake the city.

The spokesman for Afghanistan’s Public Health Ministry, Wahidullah Mayar, said on his official Twitter account on September 30 that 30 people have been killed in fighting since the Taliban takeover, and more than 200 injured. “Around 90 percent of them are civilians,” he tweeted.

The UN said the fighting has forced up to 6,000 civilians to flee the city. The Taliban has laid land mines and booby traps on major roads leading out of Kunduz, leaving many of the city’s 300,000 residents trapped.

The militants also set up checkpoints to ensure that no one leaves. Officials who made it to the airport on the outskirts of the city before roads were sealed were still seeking refuge there.

The roadblocks have prevented the delivery of food, medicines, and other supplies into the city.

Those who remain trapped in Kunduz city have reported woeful shortages of water and electricity, as many people remained indoors amid frequent gunfire.

“We are scared of leaving our homes, scared of being beaten by the Taliban,” said Sadiqa Sherza, head of Roshani Radio, a women-run station that militants burned down on September 28, the same day the Taliban captured the city.

Residents have complained that prices for basic food items have soared. Meanwhile, the price of fuel has risen threefold with Kunduz cut off from neighboring provinces.

“There is no longer any governance and the situation is only getting worse with the Taliban in control,” the eyewitness told RFE/RL.