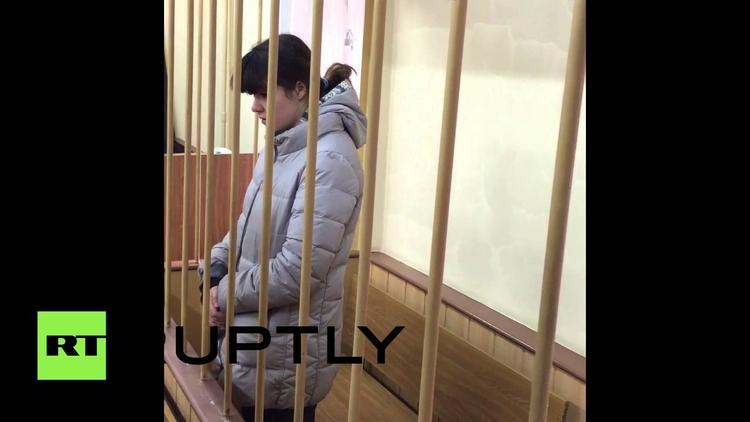 Russia appears to be cracking down on Muslims and labor migrants in response to what it says are domestic terror threats from the Islamic State (IS) extremist group with reports of mass arrests of “IS-linked suspects” last week.

The apparent crackdown comes amid heightened fears of attacks in Russia following the start of its air campaign in Syria on September 30. Earlier this month, the Federal Security Service (FSB) said it had foiled a major terror attack in the capital that was said to be in retaliation for Russia’s air strikes in Syria. Twelve suspects were arrested and three have been remanded in custody until December.

But a wave of arrests last week, billed as part of an “anti-IS” crackdown, seem to be part of a wider effort to target other Islamist groups, in particular the pan-Islamist political organization Hizb ut-Tahrir.

According to Kommersant, more than 10 Central Asians, including individuals from Tajikistan, were arrested in Moscow on October 20 on suspicion of having links to “extremist groups.”

​Kommersant’s headline suggested the suspects were “possible IS recruiters,” though no details of any alleged activity were given. A security source said the arrests were “preventative measures,” adding that the suspects” might be involved with radical organizations, including IS.”

LifeNews, a news website with links to the intelligence services, also reported a mass arrest on October 20, though it is unclear if it is the same incident reported by Kommersant. LifeNews said those arrested had included 20 “members of terrorist groups active on IS territory in Syria and Iraq.”

Again, the suspects’ alleged links to IS were hazy. According to LifeNews, 14 of those arrested were members of Hizb ut-Tahrir. But that group is not linked to IS. Hizb ut-Tahrir has even gone on record to say that it is opposed to IS and has claimed IS militants have persecuted its members in Syria.

Some aspects of Russia’s “fight against IS” have taken the tone of a moral panic about the threat posed to society by radical Islamists, with reports warning that IS is expanding its activity and influence in Russia.

Kommersant reported on October 8 that the Spiritual Administration of Muslims in the Urals announced it had opened a “spiritual front” against IS.

“Until now, the FSB in the Urals has identified followers of extremist movements like Hizb ut-Tahrir and the Islamic Party of Turkestan,” Kommersant noted.

But — as with the reports of arrests of people suspected of “possible links” with IS — the details of IS’s alleged activity in the Urals are vague at best. The mufti of Sverdlovsk Oblast, Abdul-Kuddus Asharin, did not give any specific examples of how IS supporters had radicalized locals, beyond warning that such individuals were “misinterpreting the Koran.”

In deliberately confusing Hizb ut-Tahrir with IS, and claiming its members and other suspected Islamists are recruiting for IS or are present in IS territory, Russia appears to be using the same technique as it has in Syria, where it has conflated IS with all of Syria’s armed opposition.

Deliberately confusing Hizb ut-Tahrir with IS provides a convenient way of linking the group to the Syrian conflict and to the threat of blowback, and paves the way for the Islamist group and its alleged members to be targeted on counterterrorism grounds.

The widely reported arrests of “IS supporters” also helps the security services reassure the public that they are able to foil terror plots.

It is no coincidence that the “anti-IS crackdown” comes amid heightened fears in Moscow about the possibility that militants could carry out terror attacks in retaliation against Russia’s involvement in Syria.

RFE/RL’s Moscow correspondent noted last week — following threats of “jihad” by IS and Syrian Al-Qaeda affiliate the Al-Nusra Front — that many residents fear there is a rising risk of reprisal bombings in the Russian capital.

At the same time, it is increasingly clear that Russia’s immediate military goal in Syria is not to weaken or destroy IS, but to help its ally, Syrian President Bashar al-Assad, push back against other groups fighting his forces.

The vast majority of Russia’s declared targets in Syria have been in areas in which there is no IS presence.

So amid ongoing criticism of its actions and goals in Syria, Russia needs to convince its public that it is right to intervene in the conflict — and by fueling a moral panic about IS or IS-linked militants, Moscow can do just that.

Russian President Vladimir Putin himself warned this week that IS posed a threat to Russia, and linked this threat to the Syrian conflict.

“Having created a foothold in Syria and in other countries in the Middle East, the terrorists have created and continue to create plans for expansion,” Putin said.

And Putin took care to add that Moscow’s operation in Syria had shown the government was “ready to adequately and effectively respond to terrorist and other threats to our country.”