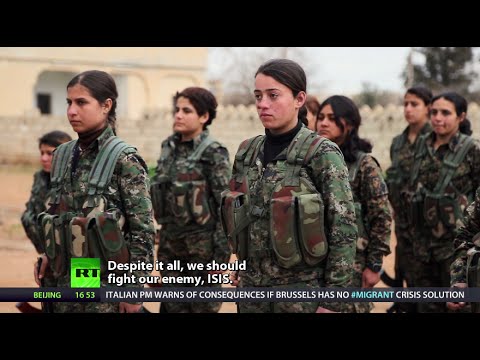 Increasing numbers of Iraqi Kurdish women are training to become soldiers; they want to join their men in the fight against the extremist Islamic State group.

Silaf Muslih doesn’t believe there should be any difference between males and females on the battlefields of Iraq. The Iraqi Kurdish woman in her early 20s is currently training to become a member of the Iraqi Kurdish military, locally known as the Peshmerga. “I am preparing myself for war,” says the would-be soldier who has already lost 11 members of her family to the fight against the extremist group known as the Islamic State. “Women have shown they are more than capable of fighting in battles.”

Claver Tilly, 23, is another local woman training with the Peshmerga. She told NIQASH that her family had encouraged her to join the force. “I would be so proud to be killed in the line of duty,” she says. “I will be the first martyr in my family.”

These two are not the only females keen to go and fight the Islamic State, or IS, group. There are increasing numbers of female volunteers in Iraqi Kurdistan who want to participate in the fight against the IS group. Official numbers are hard to come by as officials cite military sensitivity. But what is known is that between 1948 and 1992 there were only 185 women in the Peshmerga.

In the northern, semi-autonomous zone of Iraqi Kurdistan, which has its own borders, parliament and military, women have always played a part in the region’s struggle for rights. The Kurdish in Iraq were persecuted by former Iraqi leader, Saddam Hussein, and Kurdish women were part of their ethnic group’s fight for independence and equal rights, even though they were not as dominant as Kurdish men. Even though this has been happening since the 1970s at least, the first official regiment for women only dates back to 1996 in Sulaymaniyah – the first female Peshmerga Regiment was affiliated with one of Iraqi Kurdistan’s two major parties, the Patriotic Union of Kurdistan, and they tended to be assigned jobs like border security.

Since last June though, when the security crisis began, thousands of women have volunteered for military service. Recent female volunteers to join the women’s Peshmerga unit in the Iraqi Kurdish province of Dohuk number around 540, when training became available for them. Only 240 of them were qualified; one of the prerequisites was a secondary school education. Women who attend the courses will be considered officers when they leave the training and they are all expected to graduate in March next year.

There are two military colleges in Iraqi Kurdistan – in Zakho in Dohuk province and Qala Chwalan in Sulaymaniyah. The colleges train both men and women but at Zakho, the Officer’s Academy has started teaching women who want to fight the IS group.

“The women’s enthusiasm to fight in the war against the IS group made [Iraqi Kurdish] President [Massoud] Barzani order training courses for those of them that want to become officers” says Mahmoud Omar, spokesperson for the Zakho academy. “During the training we really have come to see that these women are very skilled militarily and that they will be able to go to the front lines.”

A number of female students graduated from the Zakho academy at the beginning of October and Barzani gave a speech there. “We must train women in military science, alongside our men, so that they too can participate in the defence of the country,” Barzani said. “We are also showing the whole world we are an open society and that young girls are just as capable as young boys.”

“Women tend to be more peaceful and they tend to have more experience in sectors like education and health,” says Bahar Abdulrahman, the head of the Peshmerga and Martyr Affairs Committee in Iraqi Kurdistan’s Parliament. “Which is why they are often reluctant to join the military. However because of the war against the IS group, the region’s women are taking more steps into the military.”

Previously there was definitely a society-wide aversion to having Kurdish women fighting, or in uniform. However the current security crisis has changed that. Many women and their male relations feel so angry about the IS group that it’s become more acceptable to see women in uniform. Additionally one of the examples that is often held up here is that of the Syrian Kurdish female fighters of the town of Kobani; there a handful of locals kept the IS group at bay for weeks despite a lack of munitions and supplies. The men and women there were hailed as heroes by Kurdish people in Syria, Iraq and Turkey.

“Local military colleges have increased options and support for female soldiers,” Abdulrahman notes. “It is an important development. But we should also remember that many of the Peshmerga are fighting under bad conditions,” she said, referring to the fact that often Iraqi Kurdish soldiers were using old weapons and equipment and were not being paid very much, if at all.

“It is important that our allies continue to provide us with aid and equipment,” she concluded.

RT from last summer: “Her War: Women vs. ISIS”