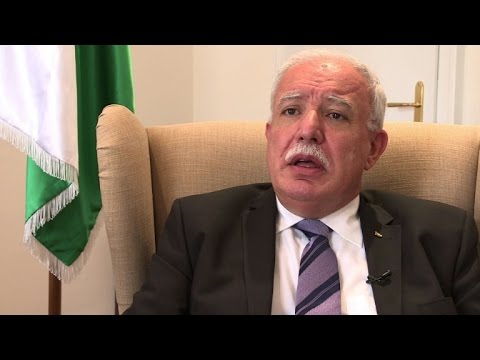 We, a group of professional and trade union figures, intellectuals, and political activists, appeal to the Palestinian leadership within the Palestine Liberation Organization and outside of it, to call on the United Nation and the permanent members of the Security Council to put the Palestine territory occupied by Israel in 1967 under the international protection of the United Nations.

This call is coming after two decades of negotiations between the leadership of the PLO and successive Israeli occupation governments. These negotiations have not been able to achieve the rights of the Palestinian people to return to the homes from which they were displaced and to self-determination. The goal of this initiative is to provide an exit strategy from the arrangement in which the balance of power is tipped entirely in favor of the occupying state, thereby giving it the opportunity to impose its policy of fait accompli.

The exit strategy from this reality at this stage aims to provide protection for Palestinian civilians and enable the rebuilding of a national strategy aimed at resolving the conflict through the realization of the historical rights of the Palestinian people.

The maintenance of the status quo helps perpetuate the occupation rather than end it, thereby providing cover for continued establishment and expansion of colonies in Jerusalem and other parts of the West Bank, as well as Israel’s plans to further isolate the West Bank and maintain control over its resources, as Israel is able to continue blockading the Gaza Strip and controlling its resources. Furthermore, it leaves the burden and costs of administering daily life under occupation to the Palestinians, making the occupation a profitable project for Israel.

The mandate to UN forces to provide protection is to include all of the Palestinian territories occupied in 1967; the Palestinian West Bank, including East Jerusalem and the Gaza Strip constitute the geo-political unit that would be subject to this mandate. The duration and implementation mechanisms of the protection force would be determined by agreement between the PLO and the UN General Assembly. The primary mission of the international protection force would be to prevent violations of international humanitarian law in the treatment of the Palestinian population living under occupation, in addition to preventing the occupation authorities from exploiting Palestinian natural resources including groundwater, as well as to prevent the acquisition of land and its annexation to the State of Israel under Israel’s Jewish settlement policy.

The United Nations Relief and Works Agency (UNRWA) would continue its work, as stipulated in its UN mandate until the return of Palestinian refugees to their homes, to provide for the basic necessities of the refugees, from water and food, to housing, work, and basic education.

Settlers remaining in the areas subject to the international protection mechanism would be subject to the laws in force in the occupied Palestinian territory, and they would not enjoy any ethnic privileges; they will be dealt with equally under the law without prejudicing the rights of the indigenous population of the land. But in terms of the general framework of the conflict, the Jewish settlers living in the colonies would still be viewed under the lens of international law.

Palestinians will continue in the administration of their lives in coordination with the Office of the International Protection Force. This self-administration would differ from the existing Palestinian Authority in that it would refrain from providing any form of security services to the occupying power. The international agreements that led to the establishment of the Palestinian Authority are to be considered expired by virtue of their content text as well as practice, and by virtue of the parties’ abandonment of them. Thus the security services will be disbanded and its members referred to retirement with the rights and benefits provided for public sector employees.

In this appeal, we affirm the following:

Any settlement must satisfy the right of return and self-determination over the whole of mandatory Palestine.

We do not claim that this step will end the Israeli occupation. However, it is an exit strategy from the current arrangement and burdens and towards the reconstruction of our national project on the basis of effective struggle.

The Gaza Strip is occupied territory and will be included in the international protection arrangement in a manner that is commensurate with its specific needs and situation. This appeal should not be interpreted so as to allow for the redeployment of occupation forces in the Gaza Strip.

The Protecting Power will control the international border crossings to enable the Palestinians control of exports, imports and the balance of payments, as happened in Kosovo. This will reduce the dependency and economic annexation of the occupied Palestinian territories to the economy of the Israeli occupation authorities.

The sole and legitimate representative of the Palestinian people is the PLO. We look forward to it getting the internal Palestinian house in order on the basis of democracy built on the broadest possible popular representation of all Palestinians wherever they may reside.

Affirm that all methods of struggle are legitimate as stipulated in international conventions and norms; and that we use the appropriate strategies of struggle in order to defend ourselves and achieve our rights, according to the specificity of each historical period and the residence of the Palestinians in Palestine and the Diaspora.

As for the reaction of some parties with this appeal:

We should not expect Palestinian parties that have benefited and continue to benefit from the situation and the existing political structure and that built its future plans on profiting from what exists, to support this direction; they may resort to resisting it in a variety of ways.

Israel will seek to oppose this move as it will put the international community in confrontation with the occupation authority. The presence of an international protection force is a practical means by which to disturb the occupation instead of reducing its expenses through international aid and promoting the illusion of normalization.

The United States will work to oppose any effort to end the occupation in a way that does not satisfy Israel. But Israel will find itself and the international community confronting a complex situation in the event that the self-rule authority (the Palestinian Authority) is dissolved and the legal cover that it had been granted by the Palestinian Liberation Organization lifted. Palestinians are capable of managing their daily affairs as they did before the existence of the Palestinian Authority through local administrations that do not provide a cover for the continuation of the occupation, as happened in the municipal elections of 1976.

This means that the struggle to end the occupation is ongoing and will not end until refugees return home and self-determination is realized. We expect the international community to live up to their duty to support putting the occupied Palestinian territories under international protection in order to get out of the cycle of negotiations that have only worked to consolidate the occupation. In terms of international popular opinion, we expect there to be general support for providing international protection to the Palestinian territories occupied in 1967, in addition to support for the call for boycott, divestment and sanctions against Israel.

Samer B. Jaber is the chosen spokesperson for a group of professional and trade union figures, intellectuals, and political activists who have come together to deliver a message during the current wave of upheaval across Israel and the occupied Palestinian Territory.