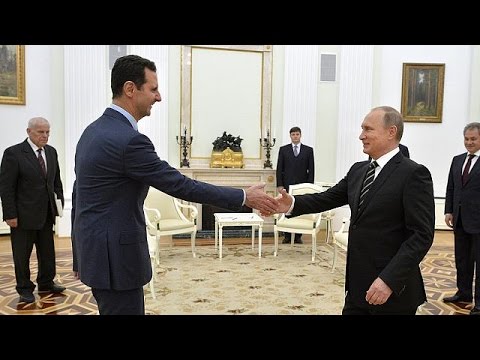 Three weeks after the start of Russia’s bombing campaign, Syrian President Bashar al-Assad has met with Russian President Vladimir Putin during a surprise visit to Moscow. Here is what makes the October 20 meeting significant.

First The Bombing, Now The Diplomacy

Russia has been bombing rebel forces that oppose Assad since September 30, enabling the regime to strengthen its position on the battlefield after months of being on the defensive. But supporting Assad militarily is only one part of Russia’s strategy in Syria. The other is opening international negotiations to put an end to Syria’s civil war.

Assad’s visit to the Kremlin could now signal the formal start to Moscow’s diplomatic drive. By coming to Moscow on his first trip abroad since the Syrian crisis began in 2011, Assad shows that he remains a fully functioning head of state. That supports Moscow’s argument that he — and by extension his ally Russia’s — interests cannot be ignored in any effort to settle the Syrian crisis.

The visit demonstrates that Assad “is more or less confident in the stability of the situation, in the fact that his country is able to survive without his physical presence in the capital,” Nikolai Kozhanov, an analyst at the Carnegie Moscow Center, tells RFE/RL’s Current Time.

Kozhanov says the visit also demonstrates that Moscow’s air strikes have achieved at least one of their goals: strengthening the ruling regime.

The next step is likely to be a strong Russian push for a meeting of outside powers with influence in Syria to discuss how to restart negotiations.

That push may have already begun. The Russian Foreign Ministry on October 21 announced that Foreign Minister Sergei Lavrov and U.S. Secretary of State John Kerry are set to meet their Turkish and Saudi counterparts in Vienna on October 23 to discuss the crisis in Syria.

Previous international efforts to find a peaceful solution for Syria have foundered on the question of whether Assad must step down as part of any political transition in the country. The West, Turkey, and the Arab states have all insisted in the past that he must do so. Moscow has rejected that position.

Whether those previous positions will remain fixed is now the central question surrounding any renewed peace talks.

A Future With Assad, Or Without?

Putin and Assad are likely to have spoken candidly during their meeting about the Syrian leader’s future role in the country.

Many analysts believe that both Putin and Assad agree that the Syrian president will eventually have to step down to clear the way for a new government in the country.

“It is obvious at this point that the Russian leadership is not interested in a long-term [military] operation, but is interested in bringing [the operation] to its final stage,” Kozhanov says. “And that final stage is not about the military victory of the Russian-Syrian alliance, but about the beginning of the negotiation process between the Syrian authorities and the opposition, which can be followed by the creation of the interim government.”

But if Assad were prepared to step down, it remains an open question of how soon that might be. Some Western officials have signaled recently that they could soften their demand for his immediate departure. British Foreign Secretary Philip Hammond suggested early this month that Assad could remain for period of time of up to some months if that were the “price” for ending the Syria conflict.

Some analysts suggest that kind of timeline now could be acceptable to both Putin and Assad because they feel sufficiently strong to assure that any negotiated future government would safeguard their interests.

There is also the possibility that Assad could leave Syria and take refuge in Russia at some point in the transition process.

“The idea of Assad leaving Syria with his wife and immediate family has been an idea floated by Moscow ever since the uprising began against the Syrian president,” says Ted Karasik, a United Arab Emirates-based adviser to Gulf State Analytics in Washington, D.C.

“The idea is that Assad can seek asylum in Russia in order to get him and his family out of the way both politically and also to assure the security and safety of the Syrian president and his wife,” Karasik adds.

Where Does Iran Fit In?

Syria’s other main ally is Iran, which has said it would willingly join peace talks over Syria but has so far remained in the background of the renewed international interest in them.

That could make Assad’s decision to make Russia the destination of his first trip abroad in many years a clear message from the Syrian and Russian leaders that the road to peace in Syria runs through Moscow, not Tehran.

Karasik says that for now Iran may be content to let Moscow take the lead, though the two countries have competing interests in the Middle East, where both vie for influence.

“I think it is correct to look at Moscow as a hub for any discussion with Tehran over what is happening in Syria today,” he says. “At this juncture it is clear that Russia is working with Iran closely on the military solutions against the extremists in Syria.”

But he warns that Iran, which is Syria’s main weapons supplier, could yet prove a wild card in any negotiations.

“There will come a day when the Russians and the Iranians might not agree on what is happening on the ground, and that is a tension point we are going to have to look for,” Karasik says.

For now, though, the Russia-Iran-Syria alliance seems to be united as it takes on rebels variously backed by the West, Turkey, and Arab states.

In recent days, the ongoing Russian air strikes have helped Syrian government forces, backed by Iranian forces and the Lebanese Shi’ite Hizballah militia, recapture territory the government had lost to rebels around Damascus and the cities of Homs and Hama. The pro-regime forces are now attempting to retake Syria’s second-largest population center, Aleppo, by expanding their offensive to the outskirts of that city.