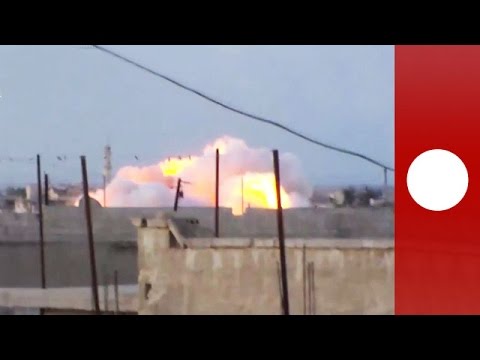 Russian MiGs for the first time on Wednesday gave close air support to the Syrian Arab Army as it attacked rebels north of Homs. The Russians also continued their airstrikes against rebel-held Idlib Province. And, the Russians for the first time launched cruise missiles from warships in the Caspian Sea on rebel targets. Over the past week and a half, Russian strategy is becoming apparent. 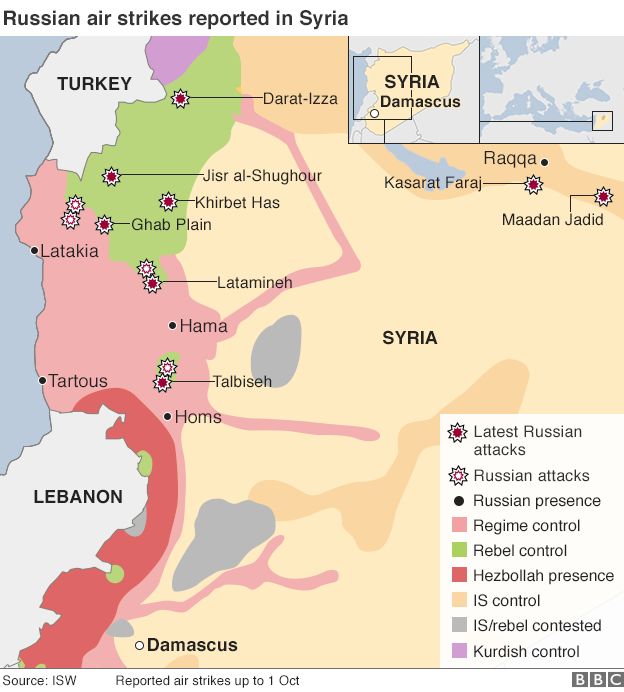 h/t Casteneda Collection U of Texas

The US State Department says it is bewildered by Egypt’s support for the Russian airstrikes on rebels in Syria. But virtually all the rebel groups who amount to anything militarily in Syria are hard line fundamentalists, and Egypt’s generals made a coup against Egypt’s own Muslim Brotherhood in 2013. So the officers are not sympathetic to Syrian Muslim Brethren who have become more radical and are trying to overthrow a government. Since Saudi Arabia and its allies on the Gulf Cooperation Council bankroll the regime in Egypt and since they fund the Salafi hardliners in Syria, there may be some friction between Cairo and Riyadh over this difference. But the Saudis also did want the officers to crush the Muslim Brotherhood, which the Saudis see as a populist loose cannon, so the situation is very complex. Probably the Saudis don’t mind if the Russians bomb the Muslim Brotherhood groups, but do mind if they bomb the Salafis, who model themselves on Saudi Wahhabism and are loyal to the monarchy.

The Russian intervention was not provoked by Daesh (ISIS, ISIL) but by the al-Qaeda-led coalition ‘the Army of Conquest’. It groups The Support Front or al-Qaeda in Syria– which reports to Ayman al-Zawahiri, the mastermind of 9/11 — with other hard line Salafi fundamentalist groups such as the Freemen of Syria (Ahrar al-Sham). The latter rejects democracy and is willing to turn over religious minorities like the Druze to al-Qaeda, with predictable results.

Al-Qaeda and its allies took the northern province of Idlib away from more moderate rebels last November, and then this spring took the key cities of Idlib (the provincial capital) and Jisr al-Shughour, the town that serves as a gateway to Latakia to the West.

Latakia is Syria’s major port and is sort of like its mouth. The digestive track goes down to Hama, then Homs, then Damascus. If al-Qaeda and its allies can effectively move west to Latakia port, they can massacre the Alawites supporting the al-Assad regime, who predominate in that province, and then cut the capital of Damascus in the south off from resupply by port. Likely then the regime will fall. Jisr al-Shughour was taken by al-Qaeda and other groups, including a Chechen unit of hard line fundamentalists, which would have alarmed the Russians. Vladimir Putin made his bones by crushing the second Chechen uprising, which was led by fundamentalists seeking an emirate. He wouldn’t want another such emirate with Chechen high officials to grow up so close to Russia as Latakia.

So Russia has as its objective to keep Hama from falling to the rebels, which would begin the process of cutting off the southern capital of Damascus from northern supply lines. Hence Russia is bombing rebel positions north of Hama. Moreover, if the Syrian Arab Army could defeat the militants north of Hama, it could take Khan Shaykhoun, and then move on southern Idlib.

Al-Qaeda has fighters north of Hama but so do smaller, less radical guerrilla groups (though some of these have fought alongside al-Qaeda sometimes). Moscow does not care so much whether it is bombing al-Qaeda or Salafi Jihadis allied with al-Qaeda, or even what Washington is now calling “moderates,” though I doubt many genuine moderates are still in the field. Russia wants to break the northern siege of Hama by these fundamentalist rebels and by al-Qaeda and its allies, and then break out north toward Idlib. Hence it gave air support to the SAA in its offensive, though early reports are that this offensive failed to make much headway.

Likewise, Russia wants to forestall any al-Qaeda advance on the Alawites of Latakia from the east, so it is bombing Army of Conquest units and arms depots in Idlib. If Moscow can go beyond that goal and roll the group and its allies back from Idlib, from Putin’s point of view that would be all to the good.

US spokesmen and politicians who complain that Russia isn’t hitting Daesh/ ISIL don’t get it. Either they don’t understand that with al-Qaeda in Idlib, Latakia could fall. Or they are just lying. Secretary of Defense Ash Carter said Wednesday that 90% of Russian strikes were not on ISIL or al-Qaeda. I do not believe this is true, since Russia is clearly bombing a lot of Support Front and Army of Conquest positions. But anyway I think if we formulated the question differently, of how many strikes were on al-Qaeda and its allies, we’d find that the majority were.

I should explain that with Syria, I”m just trying to analyze. I don’t have a dog in this fight. I despise the al-Assad regime, which is genocidal and has engaged in mass torture. But I absolutely refuse to support any group allied with Ayman al-Zawahiri’s al-Qaeda or which envisions Syria as a hardline Salafi emirate where Christians, Alawites, Druze and Kurds (altogether maybe 40% of the population) as well as secular Sunni Arabs (another 45%) are second class citizens ruled by a self-appointed morals police with machine guns.

I have a sinking suspicion that my position on al-Qaeda as a red line is not shared by some high US officials. If I am right about this, they should be ashamed of themselves and go back and read about the origins of al-Qaeda in 1980s Afghanistan. US-supported jihads have a way of biting us on the ass.

Good and bad in today’s Syria is also contextual. Having the Baath Party or its goons, the Shabiha, rule religious Sunnis is bound to cause inequities. But for the fundamentalists to conquer Alawite Latakia or the Druze regions would result in an enormous tragedy.

Ultimately Syria can only be healed by democracy and the separation of religion and state. Neither the regime nor the rebels get this, and there is no guarantee they ever will.