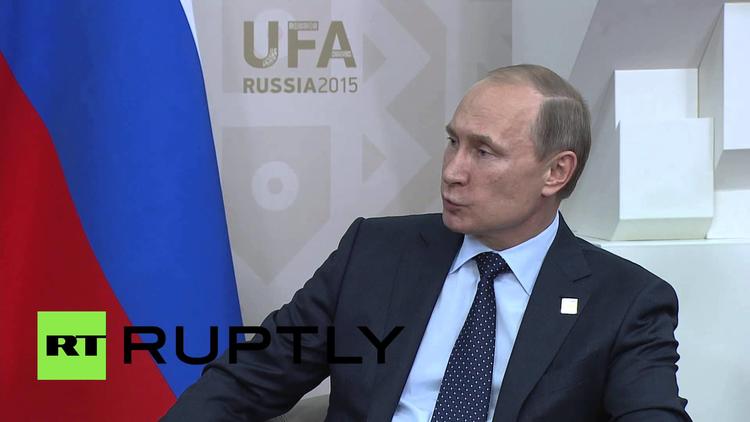 Russia has signaled its willingness to boost its involvement in Afghan security in a power play that could help President Vladimir Putin burnish perceptions of Moscow’s global significance while dealing a fresh blow to Western influence.

The indications come with Russian military planes carrying out daily air strikes in Syria in a direct challenge to Western diplomatic and military effectiveness in the Middle East, and with Moscow seeking to reassert its global relevance despite international scorn over its invasion last year of Ukraine.

“A ramped-up presence in Afghanistan, where [the Soviet Union] suffered an embarrassing defeat a generation ago, would likely be another way to telegraph Moscow’s continued relevance in the world,” says Michael Kugelman, South Asia associate at the Woodrow Wilson International Center for Scholars in Washington. “Russia worries about its global image, which has taken major hits since the conflict began in Ukraine.”

Putin described the situation in Afghanistan as “genuinely close to critical” in an address to fellow Commonwealth of Independent States (CIS) leaders at a summit in Kazakhstan on October 16. The Russian president warned of “terrorists of different stripes…gaining more influence and not hiding their plans for further expansion” and urged neighbors to “be ready to react in concert.”

It is unclear whether Moscow’s reinvigorated interest in Afghanistan has caught Washington off-guard, but U.S. President Barack Obama on October 15 announced that the United States would be keeping thousands more soldiers in Afghanistan longer than previously scheduled.

Moscow has got the attention of Kabul, which is pleading for military assistance, including advanced weapons and warplanes, to battle a resurgent Taliban and the presence of Islamic State (IS) militants in Afghanistan.

It has also rekindled fears in the minds of Afghans of a return to the proxy conditions that fueled the Soviet-Afghan War, despite the fact that Washington and Moscow have loosely cooperated for much of the past decade on Afghanistan and there are no clear indications that increased Russian involvement would put Russia on a collision course with the United States.

Lavrov added in his remarks this week, however, that Moscow had not received any “official request” from Kabul for direct military support.

Moscow has pointed in Afghanistan to a similar threat to the one it is ostensibly (but not necessarily, according to U.S. officials) attacking in Syria: the IS militant group and other extremists. IS militants and Taliban fighters appear to have made advances in northern Afghanistan, near the border with the former Soviet republics of Central Asia. Moscow is also worried about the Afghan drug trade, which could worsen Russia’s crippling heroin epidemic.

Russia has allowed nonlethal NATO equipment through its territory to Afghanistan in the 14 years since the U.S.-led coalition invaded in response to the 9/11 attacks that Washington said were plotted on Afghan soil. Moscow has also provided training to Afghan pilots and taken part in counternarcotics operations inside the country.

Wary Of Past Mistakes

With insurgent attacks in Afghanistan mounting and U.S. forces eyeing a path to the exit, Kabul’s representatives are knocking with increasing urgency on doors in the Russian capital.

A deputy speaker of Afghanistan’s lower house of parliament, Mohammad Nazair Ahmadzai, was scheduled to be in Moscow this week to press Russian lawmakers on the need for military assistance from the former foe to counter emerging security threats from Islamist radicals like IS, also known as ISIS or ISIL.

“We will say that ISIS is not a threat only for Afghanistan, but it’s a threat to its neighbors as well,” Ahmadzai told RFE/RL ahead of his trip. “But we will make it clear that our neighbors should not violate Afghanistan’s sovereignty and we will not allow any military operation in Afghanistan.”

“Russia is a powerful neighbor with a history of military cooperation with Afghanistan,” Najib Mahmood, a professor of political science at Kabul University, says of Soviet-era backing for Afghan armed forces. “Many Afghan military leaders and experts studied in Moscow and have the know-how and experience with Russian technology.”

Mahmood also suggests that Kabul has been keen to bolster ties with regional players like Russia to shore up security since the pullout of most NATO troops from Afghanistan in 2014.

But Moscow is sure to eye any increased role in Afghan affairs warily. The Soviet Union’s calamitous 1979-89 military venture in Afghanistan killed or displaced millions of Afghans and sapped Moscow’s precious political, military, and economic resources in the Soviet Union’s dying decade.

Mindful of the 15,000 Soviet soldiers lost as a result of Leonid Brezhnev’s ill-fated invasion, Russian officials have repeatedly said they will not send troops to Afghanistan.

“There will need to be a trade-off between stepped-up activities to secure its interests and appropriate caution, given its past history in Afghanistan,” Kugelman says. “Russia, which is not known for exercising caution in global affairs, may not see it this way, but any form of increased presence in Afghanistan would need to be done very carefully.”

Caught In The Middle Again?

While Soviet tanks retreated from Afghanistan a quarter of a century ago, the prospect of Russian security assistance has brought back memories of the Soviet-Afghan War in the minds of Afghans.

Some fear that their officials’ pleas for military help from Moscow — with U.S. troops still in the country and a seemingly rekindled rivalry between Washington and Moscow — could leave Afghanistan vulnerable to a familiar hallmark of the Cold War: a proxy war.

The Afghan daily Sarnawesht on October 7 drew a direct line between events in Syria and “signs of new rivalries between America and Russia” in Afghanistan, citing a bomb attack near Moscow’s embassy in Kabul, “insecurity in border areas of Central Asia, close to Russia,” the “brief fall” to Taliban insurgents last month of the provincial capital Kunduz, and “the spread of violence to Central Asia.”

“Today everyone can easily see the nature of the war,” the editorial argued, “They know there is a foreign, proxy, and intelligence war in Afghanistan.”

“A major game is under way between global rivals in Afghanistan,” another editorial, in Hewad, a government-run newspaper, warned on October 12. It went on to argue that Russia and the United States had chosen Afghanistan as the venue for their renewed rivalry.

The term “proxy war” has already been invoked about the conflict in Syria from Washington to Beijing, by observers as diverse as Republican Senator John McCain and the Chinese ruling party’s official newspaper.

U.S. President Obama has dismissed that notion, vowing that “we’re not going to make Syria into a proxy war between the United States and Russia.”

Siltanat, a teacher in Kabul, expresses fears to RFE/RL that “if Russia interferes in Afghanistan, it will pit Russia and America against each other. Afghanistan will be stuck in the middle and will be ruined.”

A student at Kabul University, Hasib, tells RFE/RL: “Russia saying it wants to fight and get rid of ISIS in our country is another excuse to capture Afghanistan. They’ve always wanted to bring Afghanistan under their control. It won’t have a good outcome.”

“I think Russia will not get more involved in Afghanistan directly, but it is already increasing its role as supplier of military hardware,” says Thomas Ruttig, co-director of the Afghanistan Analysts Network, an independent think tank in Kabul. “This will not only be welcomed by the Afghan government but also by Washington.”

The Woodrow Wilson International Center’s Kugelman says that while Washington may not like that its geostrategic rival is taking on a bigger role in Afghanistan, their interests are largely convergent there and a larger Russian involvement might prove helpful for Washington.

“The uncomfortable truth is that Moscow and Washington share very similar interests in Afghanistan,” Kugelman says. “They both want more stability, they both support a peace process with the Taliban, and they both seek a credible and effective Afghan government. Moscow can end up helping Washington out in Afghanistan in a big way, even if indirectly.”