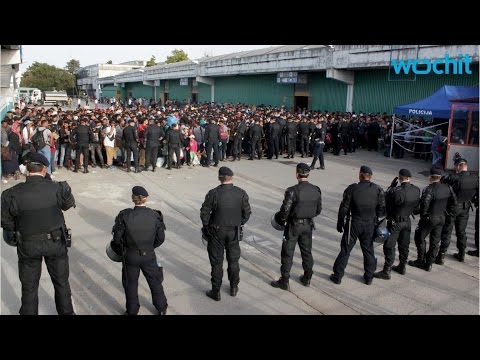 When Islamic State claimed responsibility for the attacks in Paris that have killed at least 129 people, it warned that more would follow. French president, François Hollande, has in turn vowed to show “no mercy” in his response.

This pledge is bound to have a profound effect on border controls and the treatment of Syrian refugees in the country. But France has the option to show the world that it will continue to stand for liberté, égalité and fraternité.

For some time, Europe has feared that IS could infiltrate its borders as a part of the huge influx of people fleeing Syria. And indeed, there are reports that at least one of the men who carried out the Paris attacks registered as a Syrian asylum seeker in Greece – one stop on a well-known refugee route.

France has not been enthusiastic about welcoming Syrian refugees. A few months ago, it had agreed to take only 24,000 refugees over two years – a tiny share of the millions of people seeking help.

France had already closed the border to migrants left stranded in Ventimigilia, an Italian town on the border with France – a move which caused significant tension between Rome and Paris. The mayor of one southern French city also had a blunt message for incoming Syrian refugees: “You’re not welcome here. You need to leave.”

There is a risk that France will now seek to further tighten its borders. So thousands of Syrians forced to flee their country because of IS are now in danger of finding the door closed when they arrive in Europe. They will have to cope with the knowledge that they could be mistaken for, and treated as, the very people they are trying to escape.

A field day for Islamophobes

The idea that refugee routes could have been exploited by terrorists is also a golden opportunity for Islamophobes. Across Europe, right-wing parties and their anti-immigration policies have become hugely popular in recent years. Several have successfully won places on national governments and many have influence in national parliaments. These groups have sought to further bolster their position as the migration crisis has worsened and are sure to try to capitalise on this latest incident to whip up anti-Muslim sentiment.

Others will suggest that France should simply keep calm and carry on, just like the British did after the London bombings in 2005. But the French should not simply maintain the status quo – they urgently need to work against the increasingly influential identity politics in the country that have partially contributed to the religious extremism they face today.

Even before the Charlie Hebdo shootings in January, the Council of Europe, a human rights group, had warned that France was becoming more intolerant towards minority groups, including Muslims. Despite advances in legislation and measures to combat intolerance and racism, discrimination and hate speech persist.

France has a strong political culture of laïcité according to which all citizens are in principle equal, regardless of their religion. We all stand with the French people for valuing freedom and equality, especially in the fight against IS barbarism. But there have also been concerns that France has become increasingly intolerant towards its religious minorities and their freedoms. The long-running dispute about being able to wear religious clothing in public is a particular example. Official opposition to such symbols is often seen as an attack on freedom .

The riots involving many Muslim youths in Paris a decade ago were driven by socio-economic injustice and racial segregation, not a thirst for jihad, sharia or a global Islamic state. These uprisings were a call for the national ideals of freedom, equality and fraternity to apply to them, too.

These problems have not been addressed in the past decade and the consequences are clear. More than a third of the Europeans fighting with IS in Syria are known to be coming from France. At least three of Friday’s attackers are understood to have been French.

Sending Syrians back, tightening the border controls and bringing in stricter immigration policies will not solve what have become very French problems. The route taken into France by one of these attackers is less of an issue than the route taken out by many more disillusioned citizens. France has marginalised its Muslim youth and some, as a result, have decided to join IS and return to kill.

Religious fanatics perhaps have to be answered with violence – and maybe France has every right to tighten its border controls and strongly resist the mass influx of refugees from Syria. Maybe Syrians will be sent back to countries such as Turkey, which are arguably safe. But none of these solutions addresses the fundamental and structural flaws that seem to be fanning the flames of terrorism.

The solution to terrorism is a more equitable distribution of dignity and opportunity, not the closing down of borders.