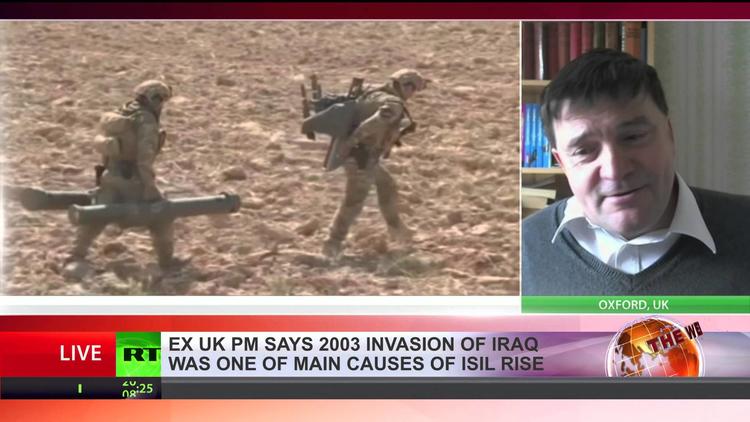 Tony Blair was warned by his intelligence chiefs that invading Iraq would increase the terror threat facing Britain. If MPs had known this, would they have voted for war?

Baroness Eliza Manningham-Buller was the director general of MI5, the UK’s domestic intelligence agency, from October 2002 until April 2007, that is, for a few months before the US/UK invasion of Iraq and for four years afterwards, while the US and the UK were occupying Iraq. She gave evidence to the Chilcot inquiry on 20 July 2010.

One of the four members of the inquiry committee, Sir Roderic Lyne, asked her,

“to what extent did the conflict in Iraq exacerbate the overall threat that your service and your fellow services were having to deal with from international terrorism?”

“The fact is that the threat increased, was exacerbated by Iraq, and caused not only my service but many other services round the world to have to have a major increase in resources to deal with it. In 2003, having had an upgrade in resources after 9/11, which my predecessor agreed, and … another one … in 2002, by 2003 I found it necessary to ask the prime minister for a doubling of our budget. This is unheard of, it’s certainly unheard of today, but he and the Treasury and the chancellor accepted that because I was able to demonstrate the scale of the problem that we were confronted by.” (p26-7)

Sir Roderic Lyne asked “how significant … a factor was Iraq compared with other situations that were used by extremists, terrorists, to justify their actions”. She replied: “I think it is highly significant … By 2003/2004 we were receiving an increasing number of leads to terrorist activity from within the UK.” (p18)

There had been, she said, “an increasing number of British-born individuals living and brought up in this country, some of them third generation, who were attracted to the ideology of Osama bin Laden and saw the west’s activities in Iraq and Afghanistan as threatening their fellow religionists and the Muslim world” (p19).by 2003 I found it necessary to ask the prime minister for a doubling of our budget. This is unheard of …

As a consequence, the fact that the London bombings in July 2005 were carried out by British citizens didn’t come as a surprise to MI5.
Al-Qaeda activity increased “substantially” because of Iraq

So, there is no doubt whatsoever that al-Qaeda related activity in Britain increased “substantially” because of Britain’s participation in the invasion of Iraq. This activity included the London bombings of 7 July 2005, in which 52 people were killed and more than 700 were injured.

If Britain had not participated in the invasion of Iraq, it is very unlikely that such an upsurge in al-Qaeda related activity in Britain, including the London bombings, would have occurred. Stating that is not a justification for the London bombings or other al-Qaeda attacks. It is simply a statement of fact.
Sir David Ormand’s evidence to Chilcot

Sir David Omand held the post of Security and Intelligence Co-ordinator in the Cabinet Office from June 2003 until April 2005. He gave evidence to the Chilcot inquiry on 20 January 2010. Asked by Sir Lawrence Freedman for the inquiry what intelligence assessments were made before the invasion about the potential impact on al-Qaeda, he replied:

“… in August 2002, the JIC (Joint Intelligence Committee) judged that the build-up of forces in the Gulf, in the region, prior to an attack on Iraq, would increase public hostility to the west and western interests.

“By 10 October the JIC is warning that AQ (al-Qaeda) and other Islamist extremists may initiate attacks in response to coalition military action. We [the intelligence services] pointed out that AQ would use an attack on Iraq as justification … for terrorist attacks on western or Israeli targets. We pointed out that AQ was already in their propaganda portraying US-led operations as being a war on Islam and that, indeed, this view was attracting widespread support across the Muslim community.

“Coalition attacks would, we said, radicalise increasing numbers. On 16 October 2002, we reaffirmed that the United Kingdom was a priority target for AQ. On 13 December 2002, we warned that US-led action could draw large numbers to the Islamist extremist ideology over the following five years, and again, on 10 February, that the threat from AQ would increase at the onset of any attack on Iraq and that we should all be prepared for a higher threat level to be announced and for more terrorist activity in the event of war.” (p38/9)

Baroness Manningham-Buller confirmed to the Chilcot inquiry that the government was warned in advance that there was likely to be a heightened threat from al-Qaeda as a result of British participation in the invasion of Iraq. She agreed that her judgment prior to the invasion was that “a war in Iraq would aggravate the [terrorist] threat from whatever source to the United Kingdom” (p31) and that “there wasn’t any particular controversy amongst the intelligence agencies about that judgment” (p32). If Britain had not participated in the invasion of Iraq, it is very unlikely that … the London bombings would have occurred … It is simply a statement of fact.

This was communicated to the government through Joint Intelligence Committee (JIC) assessments and, in her case, directly to the home secretary (David Blunkett at the time) to whom the head of MI5 reports. If ministers read JIC assessments she said “they can have had no doubt” that, in the opinion of the intelligence services, the projected invasion of Iraq would increase the threat to Britain from al-Qaeda.
Government stayed silent about heightened threat prediction

The reason for this is obvious: the government was in the business of making a case for war against Iraq, so intelligence assessments that suggested that this would increase the likelihood of bombs on British streets were kept from parliament and the public. Had MPs been aware of these assessments on 18 March 2003, they might not have given a green light to military action.

On that day, Tony Blair did not tell them that al-Qaeda activity in Britain would likely increase with murderous effect if they voted for war. On the contrary, he told them that a vote for war was a vote to combat al-Qaeda; that the overthrow of Saddam Hussein would prevent a future alliance between him and al-Qaeda, as a consequence of which al-Qaeda would be armed with “weapons of mass destruction”.

This is a variant of the story told by the Bush administration at the time to bolster popular support for attacking Iraq, namely, that such an alliance already existed and Saddam Hussein had a hand in the 9/11 attacks. This is not supported by any intelligence. Nevertheless, a Harris poll in July 2006 suggested that 2 out of 3 Americans still believed it to be true (see here). And, according to a Zogby poll in February 2006, 85% of the US troops serving in Iraq believed that their mission was mainly “to retaliate for Saddam’s role in the 9-11 attacks” (ibid).

Alastair Campbell. Flickr/University of Salford, CC BY 2.0
British version of the US propaganda line

Alastair Campbell’s diary entry for 27 February 2003 (published in book three of his diary extracts) explains why the British version of the US propaganda line was adopted:

“TB felt we had to be pushing two main arguments – the moral case and the reason why the threat was real and current, not because he could whack missiles off at London but because he could tie up with terrorists and others with a vested interest in damaging our interests. But we should understate rather than overstate … The Americans saying there was a direct link [between al-Qaeda and Saddam Hussein] was counterproductive. Far better to be saying there was a possibility and one that we were determined to ensure never came about.”

How a non-existent alliance could pose a threat that is “real and current” is a mystery.

And this propaganda line (including the assertion that Britain was under threat from a non-existent alliance) appeared in Tony Blair’s speech on 18 March 2003 when he persuaded the House of Commons to endorse military action:

“The key today is stability and order. The threat is chaos and disorder — and there are two begetters of chaos: tyrannical regimes with weapons of mass destruction and extreme terrorist groups who profess a perverted and false view of Islam …

“Those two threats have, of course, different motives and different origins, but they share one basic common view: they detest the freedom, democracy and tolerance that are the hallmarks of our way of life. At the moment, I accept fully that the association between the two is loose — but it is hardening. The possibility of the two coming together — of terrorist groups in possession of weapons of mass destruction or even of a so-called dirty radiological bomb — is now, in my judgment, a real and present danger to Britain and its national security.”

(Dare we suggest that recent experience has demonstrated that it is the overthrow of tyrannical regimes that produces “chaos and disorder”?)

Tony Blair didn’t mention to the House of Commons that he had received an intelligence assessment a month earlier, which

(1) said there was no evidence that Iraq had provided chemical or biological materials to al-Qaeda, and

Nor did he mention to the House of Commons that, in the opinion of the intelligence services, the invasion of Iraq which he was asking them to endorse would increase the threat to Britain from al-Qaeda.
The sensible thing to do

But, instead, Iran was included in the “axis of evil” and shunned and Iraq was invaded and occupied, falsely justified in part on the grounds that Saddam Hussein had a hand in 9/11. In the process, Iraq was transformed from an al-Qaeda-free zone into an area where al-Qaeda flourished, so much so that the president later described it as “the main battleground in the war against terror”. Meanwhile, Saudi Arabia has continued to inspire and finance al-Qaeda and its offshoots – and continued to be the US’s best friend in the middle east, apart from Israel.

This disastrous policy, which has cost the lives of hundreds of thousands of Iraqis, was compounded in the following decade by the overthrow of another secular Arab regime in Libya in 2011, followed by a 4-year long attempt to overthrow another in Syria. Three secular Arab states that were potential allies against al-Qaeda have been destroyed or badly damaged by the US and its allies, enthusiastically supported by Britain, and as a result the al-Qaeda offshoot, ISIS, has established a “caliphate” in parts of Iraq and Syria and has associated organisations in many parts of the Muslim world, from Nigeria to Libya to Yemen and Afghanistan.