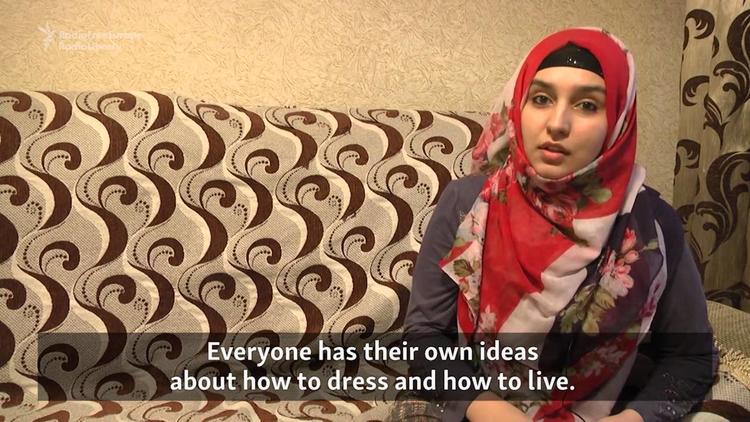 Nabijon spends nearly 10 hours a day inside his one-room barbershop on a dusty backstreet in Khujand, Tajikistan’s second-largest city.

He has no shortage of customers.

“Business has never been this good,” says the third-generation barber, who politely declines to give his full name.

“Before, people would mostly come for a haircut. Now many customers come to trim their beard,” he says. “You don’t see long, bushy beards on the streets anymore.”

Seeing the rise of Islamic State and other extremist groups in recent years, Tajik authorities have done their best to eliminate outward displays of what they see as dangerous, imported aspects of Islam in recent years.

This has put women who dress in Islamic attire not traditionally worn in Tajikistan, as well as men with heavy beards, in the spotlight.

Men have been detained on the street and forcibly shaved at police stations. And when President Emomali Rahmon used a Women’s Day speech in March to publicly chastise those who wear “foreign” dress, saying that outsiders were using clothing to develop an “extremist” trend in Tajikistan, it was taken as a warning.

The look of Dushanbe’s streets has changed as a result. Whereas solid-colored black or brown hijabs had become a common sight, today anything but officially acceptable and traditional Tajik head scarves — colorful and tied behind the head — are a rarity.

But even if the government’s approach has succeeded in preventing Tajiks from displaying their religiosity in public, it has also raised fears that it risks deepening divides between secular Dushanbe and conservative Muslims. Rather than deterring Tajik Muslims from turning to brands of Islam outside the state’s control, observers note, repression could have the opposite effect — and even push them onto a dangerous path.

“The kind of repressive measures they are using both deter and encourage radicalization,” says John Heathershaw, an expert on Tajikistan at the University of Exeter. He warns that, just as some people may be intimidated by the measures and fall into line with state-sanctioned guidelines for Islam, others could respond by going underground and becoming militant.

Fears of Islamic militancy run particularly high in Tajikistan, a country still scarred by a civil war in which Islamists, allied with democrats, fought pro-Soviet authoritarian forces just 20 years ago. The war killed as many as 100,000 people.

“After the war, the situation has still not entirely stabilized,” says Helene Thibault, who researches Central Asia at the University of Montreal in Canada. “There are always some fault lines, some regions, where political antagonism, regional antagonism, are still there.”

She notes that, in 2010, Islamic militants who had been given lengthy sentences broke out of jail in the Rasht Valley in north-central Tajikistan, prompting a yearlong government operation to kill or capture them.

More recently, in 2012 and 2014, local groups which the government accused of being Islamic militants fought with security forces in Gorno Badakhshan, in eastern Tajikistan.

Since the 1992-97 civil war, moderates have held the upper hand among politically active Muslims after a peace deal resulted in the country’s only Islamic party having a place in government. But Dushanbe’s banning of the Islamic Renaissance Party of Tajikistan (IRPT) earlier this year, and the arrest of its moderate leadership, has raised the danger that the moderates could now be sidelined, allowing more extremist elements to take their place.

Faridun Hodizoda, a Dushanbe-based expert on religious issues, says that “some radical” members of the party had previously criticized the leadership for being too moderate.

“They used to put enormous pressure on the party’s leadership for making peace with the government,” he says. “Now they say: ‘We told you so.'”

He says that could mean trouble for the future.

“I don’t rule out the possibility of the IRPT continuing its operation as an underground movement,” Hodizoda notes. “If they go underground, they would be more radical.”

With the banning of the IRPT, which had been the only officially registered Islamic party in the former Soviet Union, Tajikistan’s religious opposition no longer has any representation in government. The IPRT, which composed the largest faction in the opposition coalition during the war, lost its two seats in parliament in flawed elections in March.

President Rahmon has argued that rolling back Islamic influence in Tajikistan is necessary to stop growing militancy among Islamists. Tajikistan’s Prosecutor-General’s Office said in July that it has opened more than 420 cases against Tajik citizens “fighting alongside foreign, extremist groups in Syria and Iraq.”

But the mounting pressure over the past couple of years also appears to be part of a concentrated effort to keep Islam in Tajikistan from slipping out of the control of the state, particularly as influences from elsewhere in the Islamic world make themselves felt.

“There is a continuation of Soviet practices in terms of portraying religion in a negative way, as contrary to progress,” says Thibault. “And also in the Soviet tradition, there is a fear that Islam from outside is also dangerous.”

Rahmon has controlled Islam by keeping the nominally independent Muftiat, which appoints the country’s Muslim clerics, directly under the presidential office. Imported Islam, however, has lines of authority that are outside the country and cannot be so easily controlled, making Dushanbe visibly nervous.

The country was shocked when in May the commander of the Tajik Interior Ministry’s Special Forces, Gulmurod Halimov, appeared in a video clip saying he had joined the Islamic State extremist group to protest the government’s ban on Islamic dress in schools and offices, and limitations on public prayer.

At the same time, there has been an uptick in violence in Tajikistan. In September, attacks against police units in and near Dushanbe left more than 20 people dead, just days after the banning of the IRPT.

The reasons behind the incident were not immediately clear, though the government blamed militant Islamists, specifically Deputy Defense Minister Abduhalim Nazarzoda.

Nazarzoda, who was killed in a police operation before he could make any public statements, had once been an IRPT member but was not generally considered to be an active party member.

On Dushanbe’s streets, the decrease in the number of people in Islamic dress is much to secularists’ delight.

Many conservative Muslims, however, see it as an unnecessary meddling in their personal freedom.

Manzura, a practicing Muslim who owns a small perfume shop in Dushanbe, says she had to invent a dress code to “please both Allah and the authorities.”

After officials dropped by earlier this year and made it clear that she should not wear foreign attire, Manzura says, she stopped wearing the dark-colored hijab that covered her head and clothes for fear she would lose her license to work.

Now she wears a high-collared, long-sleeved shirt over long trousers. Her upswept hair is covered by a vivid red fabric reminiscent of an African head wrap.

“My body is still fully covered in compliance with Islam,” says Manzura, who in her high heels and colorful garb is every bit the fashion-conscience urbanite.

The government’s campaign to limit Islam comes as Rahmon has targeted not just the IRPT but also secular opponents, marginalizing moderates and potentially destabilizing the country by reintroducing ingredients present during the civil war.

Umarali Kuvatov, who founded the secular political group Group 24, was shot dead under mysterious circumstances in March in Istanbul. His family blames Tajik authorities for the killing.

Another opposition party, the New Tajikistan movement, was crushed shortly after its founding in 2013 when its leader, Zayd Saidov, was sentenced to 29 years in jail on a string of charges ranging from rape to financial crimes.

“Ten or 12 years ago, there was a bit more space,” says Heathershaw. “There was more space for the press to be a little bit critical and for multiple opposition parties to think that they could make comments that were critical. But it is different now.”

Discontent over the increasingly authoritarian governing style is made potentially more dangerous considering widespread unhappiness over the dire economic situation in Tajikistan.

One-in-six working age Tajiks cannot find employment in country and instead go to Russia to earn money to send home. A recent World Bank report called Tajikistan the world’s most remittance-dependent country, noting that the country’s economic growth has dropped significantly along with Russia’s slowdown and the depreciation of the ruble.

The report noted that growth in Tajikistan’s Gross Domestic Product (GDP) slowed to 6.7 percent last year from 7.4 percent in 2013 and that it could drop to 3.2 percent in 2015.

Discontent over the economy, charges of regionalism, and political Islam all played their role in sparking civil war immediately after Tajikistan’s independence.

At that time, grievances centered upon the monopoly over power and the economy by one region and old-guard former Soviet bosses.

A common complaint in Tajikistan today is that all the best jobs are held by people from Rahmon’s region and that people from other regions have no choice but to work as migrant laborers abroad.

All this makes for a dangerous cocktail as Rahmon appears intent on pursuing an increasingly authoritarian line that particularly marginalizes conservative Muslims. However, he appears to be betting that his country is unlikely to slip into armed conflict again and that he has sufficient support from secularists to continue.

Back in the barber shop in Khujand, Nabijon is satisfied with his booming business. He charges an equivalent of $0.75 for trimming a beard, the same amount customers pay for a haircut.

An average customer comes in three times in two weeks, making a tidy extra income for the barber. He says he is quite content with Rahmon’s policies.

RFE/RL: “Sisters Split By Tajikistan’s Crack Down On Mulsims”