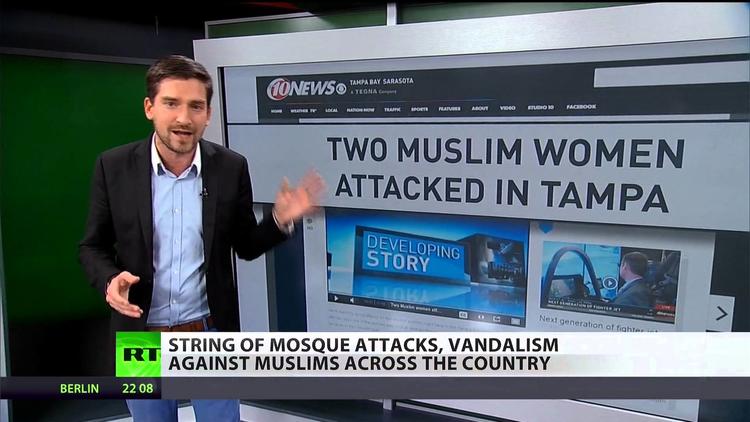 From an attack on a hijab-wearing sixth grader in the Bronx to the arson of a mosque near Palm Springs, reports of hate crimes targeting Muslims are more than troubling anecdotes, but rather, reflect a measurable nationwide rise in Islamophobic violence, according to two separate studies released this week.

Researchers with the Center for the Study of Hate and Extremism at California State University (CSU) found that anti-Muslim hate crimes have tripled in the wake of the Paris and San Bernardino attacks.

According to The New York Times, which obtained the study ahead of its public release, there has been an average of 12.6 “suspected hate crimes” against U.S. Muslims per month for the past several years. But since the Paris attacks in mid-November, that monthly number has climbed to 38 attacks that are “anti-Islamic in nature.”

Such crimes include arson and vandalism of mosques, shootings, and death threats.

“We are seeing an unbelievably toxic, anti-Muslim environment in our society that is being encouraged and exploited by public figures like Donald Trump, Ben Carson, Rick Santorum, and others.”
—Ibrahim Hooper, Council on American-Islamic Relations.

“The terrorist attacks, coupled with the ubiquity of these anti-Muslim stereotypes seeping into the mainstream, have emboldened people to act upon this fear and anger,” CSU researcher Brian Levin told Times reporter Eric Lichtblau.

While the researchers said the attacks have not quite reached the levels seen in the immediate aftermath of the September 11th, 2001 attacks, they identified similarities in the climate, including attacks on Sikh people falsely believed to be Muslim.

The university’s data corroborates a report released this week by the Council on American-Islamic Relations (CAIR), which noted a severe rise in attacks on mosques, including vandalism, destruction, and intimidation.

In fact, CAIR said the 29 documented attacks on Mosques in 2015 is the highest annual number the advocacy organization has recorded since it began keeping track in 2009. The group noted that “November 2015 was the most significant spike, with a total of 17 mosque incidents, with all but 2 of those incidents occurring in the wake of the November 13 Paris terror attacks.”

These attacks are not happening in a vacuum.

“We are seeing an unbelievably toxic, anti-Muslim environment in our society that is being encouraged and exploited by public figures like Donald Trump, Ben Carson, Rick Santorum, and others,” Ibrahim Hooper, a spokesperson for CAIR, told Common Dreams. “This is leading to fresh incidents of hate crimes nationwide.”

Hooper described the violence as “off the charts,” adding: “I don’t think we’ve seen the end of it.”

Fresh incidents this week underscore the trends highlighted in both reports.

All schools in Augusta County, Virginia were closed on Friday after a world geography class taught a lesson on Arabic calligraphy—which then prompted a racist and Islamophobic backlash.

And in Grand Rapids, Michigan this week, a Sikh store clerk was reportedly called a “terrorist” and then shot in the face by an individual demanding money from the register.

Over the past month, people across the United States have staged rallies, vigils, and speak-outs against rising Islamophobic violence, including a mobilization in New York under the banner of “Human Rights Trump Oppression.” Large numbers are expected to gather at a demonstration on Friday in San Francisco, organized by the Arab Organizing and Resource Center, calling for the “upholding of the dignity of communities.”