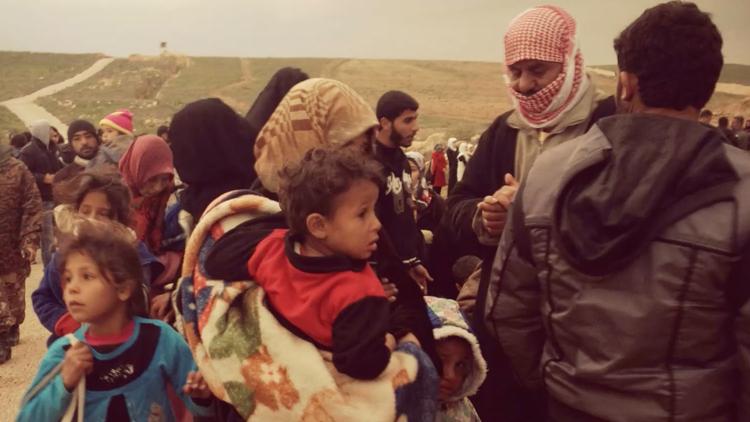 ZARQa, Jordan (IPS) – Emelline Mahmoud Ilyas is an outgoing 35-year-old mother of three from Syria. Sitting in a community centre in Zarqa, Jordan, where she just held a meeting with Jordanian and Syrian parents on the subject of childcare, she remembers the ‘journey of death’ that led her family to the Hashemite Kingdom.

Huddled in a ditch by the border next to her husband and her three children, while explosions went off all around them, she was certain that even if her body survived, her mind would forever remain trapped in that ditch. Little did she know that in the space of two years she would be helping other struggling Syrian refugees and destitute Jordanians to turn their lives around in her adoptive city of Zarqa.

Only wind and dust greeted Ilyas and her family upon their arrival in Za’atari, the purpose-built refugee camp in the barren eastern desert, a far cry from the cosmopolitan Damascus suburb they had fled 10 months before.

“I swore then that if I couldn’t get out of Za’atari, I would head back to Syria and die there,” Ilyas told IPS of her time in the camp. After a few days, they paid a smuggler to leave illegally and, paperless, they reached the city of Zarqa.

Even as things improved when her husband found a job in a barber shop, Ilyas experienced first hand the loneliness of the urban refugee. She remembers that there was no one to talk to about the war or the feeling of loss. “I would sit at home, depressed, blaming my husband for everything, because we had left Syria and because there was no way out,” she told IPS.

In Syria Ilyas was a civil servant employed in a ministry for monitoring and inspecting corruption in the public sector. Not working in Jordan added to her despair.

But with her children finally back in school, she was reluctant to return to their home in Syria where schools were open sporadically at best in the unrest. All three had integrated well and were happy. Ilyas was the unhappy one.

The news continues to report the crisis faced by Europe as it struggles with the 100’s of thousands of refugees reaching its. But since 2011, Jordan alone, has quietly welcomed more than 700,000 Syrian refugees registered with UNHCR, and possibly up to 1,5 million including estimated illegals when added to official figures.

The Hashemite Kingdom has a surface of only 89,350 square kilometres and a population of 6.5 million people and an added 2.77 million refugees. In its young history it has welcomed hundreds of thousands of refugees, most notably Palestinians and Iraqis. Four years after the first trickle, though, the influx from Syria gives no sign of easing and presents many new challenges.

NGOs and government institutions warn that high numbers of refugees are now scattered in urban areas, rather than concentrated in camps where they can be easily reached by appointed service providers, and old approaches are falling short.

Zarqa, known as the home of the late Al Qaeda leader Abu Musab al-Zarqawi, is in north-eastern Jordan, it boasts a population of 500,000 plus some 50,000 Syrians and is no stranger to the refugee crises. In 1948 a Palestinian camp rose next to it and it was gradually incorporated into the now impoverished city.

Zarqa suffers from high unemployment rates and as Islamist factions continue to enjoy widespread support amongst its marginalised population. It is kept under tight control by government authorities in fear of political destabilisation. But as reforms are slow in coming, discontent simmers just under the surface.

“Rents in Zarqa have risen 600 per cent since 2011, sometimes you find three refugee families in one flat, ” Ohud Bayidah, Action Aid’s Zarqa coordinator, told IPS. “On top of this, Jordanians complain of desperate Syrians working for small wages. The influx also places extra pressure on the health sector and the schooling system,” she continued. All of this, negatively affects relations between Syrian and Jordanians.

Action Aid is one of the first NGOs to turn its attention to the needs of refugees in urban settings. The old models of distributing available services or foodstuffs, they maintain, are not enough when isolation, domestic violence, lack of education opportunities, unemployment or substance abuse come into the picture.

For Ilyas things began looking up when she heard of a psychosocial workshop run by the Centre for Victims of Torture (CVT). Sharing memories of war-torn Syria, she says, helped relieve some of the pressure. “After that, I realised I wasn’t alone, I really felt hopeful again,” she told IPS.

She walked the streets of Zarqa knocking on the doors of a variety associations asking for more workshops and training opportunities. Finally she joined a queue outside an UNRWA community centre and learned about Action Aid’s community circles, which bring Syrians and Jordanians together under the guidance of community organizers. Ilyas soon became one.

“Through the circles I get to help women like me, Jordanians too,” Ilyas explained. The circles meet once weekly, men and women separately but due to conservative social norms it is often harder for women to join. “We discuss personal or family problems and how we can try to solve them by referral to service providers or by supporting each other.”

The community circles help NGOs identify the major problems affecting Syrians and Jordanians living side by side in order to provide the help that is needed, rather than the services that are available. “Psychosocial services and protection are what people demand most,” Bayidah told IPS. “Domestic violence is a big issue as is exploitation of children.”
On a personal level, the circles help people connect with each other, empathise and care. “Once, in a circle, someone told me of girl who tried to kill herself after her mum took her out of school. I went to see them with Bayidah, we saw that the mother is alone and under a lot of pressure so we are helping her to cope.”

This model of community mobilization has been an opportunity for field coordinator Bayidah too. A 28-year-old from Karak, she is the first in her family to complete a university education and the first female to move to Amman by herself. “My dad was always open-minded about my education but convincing him to let me move while unmarried was hard,” she remembered.

After she told him that the alternative to this job opportunity would be to sit at home unhappy, he eventually agreed to a one-month trial. “They did try to convince me to move back but now they realise I am happy. I serve my community and they are very proud.”

Although wearing a hijab to blend in Zarqa was a big change for Ilyas, the circles have opened a door into activism that she had never imagined possible. “I was talking to my sister who is still in Syria and she couldn’t believe that this is possible here, that people can organize like this, freely.”

Although Jordanian authorities are slowly opening inroads into improved political representation in the periphery, they are still sceptical about empowerment from below and community mobilization programs are treading carefully.

For Ilyas, though, at the moment it is enough that the circles helped her climb up that wadi or ditch at the border.
“I was supposed to be the refugee that everyone would take care of but now people thank me for helping them, they think I am Jordanian.”