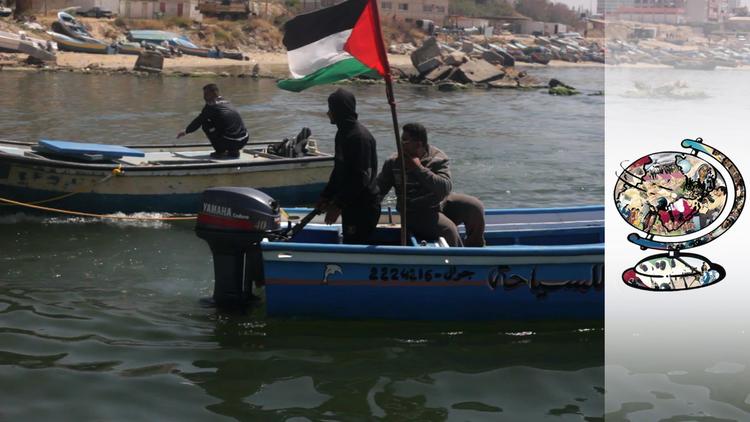 Whenever Mariam Aljamal’s children hear the sound of thunder at night, they wet their beds. Their reaction is almost instinctive, and is shared by a large number of children throughout the Gaza Strip.

Mariam’s three children — Jamal, Lina and Sarah — were all born a few years after the Gaza siege was first imposed in 2006, and all of them have experienced at least one Israeli war.

“My kids feel scared when the electricity goes off, which is most of the time,” says the 33-year-old mother from Nuseirat refugee camp, who has a degree in communication and is currently pursuing her MA. “They are still living the trauma of the 2014 offensive. War is still haunting my family, and life has become so hard for us.”

Indeed, after years of trying, Mariam is yet to find work. Unemployment in Gaza is the highest in the world, according to the World Bank.

The siege on Gaza was imposed in stages, starting January 2006, when the Hamas movement won the legislative elections in the Occupied Territories. Donors’ money was immediately withheld, so the new government could not pay the salaries of its employees. The conventional wisdom, then, was the new government would soon collapse, and Hamas’ rival, Fatah, would quickly resume its control over the Palestinian Authority (PA).

The Israeli hope, which was reinforced by the US and also shared by PA President Mahmoud Abbas and many in his party, never came to fruition. To speed up the projected collapse, Israel began sporadic bombardment of Gaza and carried out a sweeping campaign to arrest many of its elected MPs, coupled with a Fatah and Hamas dispute, which eventually turned into street battles in the summer of 2007.

It was then that the siege became complete, now ongoing for ten years. During this time, Fatah resumed its control over the PA in the West Bank, reconciliation between Hamas and Fatah largely failed, the Rafah border has been mostly sealed, and Israel has launched three major wars that have killed thousands.

The destruction in Gaza as a result of three consecutive wars (2008-9, 12 and 14) has been so severe, it has affected almost every aspect of the Strip’s already dilapidated infrastructure. Power outages, for example, have become part of life in Gaza. If all goes according to plan, Palestinians here have only 8-10 hours, per day, to utilize electricity, and for the rest of the day they suffer in darkness. The UN had already declared that life in Gaza will become ‘uninhabitable’ by 2020.

But there are aspects of this drama that do not receive a fair share of attention, such as how the siege is hindering human development for an entire generation.

When the siege was imposed, Ahmad Ghazal was only 13 years old. Now, he is 23 and works at a local library in Gaza City. “Life here is not pleasant,” he says. “In the last ten years my family has suffered the lack of food, clean water, proper medical care and the most basic of human needs. But what frustrates me most is the fact that I am not able to move freely. The Israeli-Egyptian shut down of border crossings has brought our life to a standstill. I feel trapped.”

Maher Azzam is 21 years of age and he, too, feels imprisoned. He teaches English at Smart International Centre for Languages and Development and aspires to be a writer. However, he sees life in Gaza as a slow death.

“The number of martyrs in the Strip over the course of 10 years has exceeded 4,000, but those innocent people only died once,” he says. “People who are still alive in Gaza, have been dying every day for a whole decade. But we must stay optimistic and hopeful. We have learned to be creative to survive, to express ourselves and to carry on without submitting, despite Israel’s ongoing crimes and the silence of the international community.”

Heba Zaher, a 21-year-old graduate from the Islamic University, also understands the centrality of hope to the Gaza narrative. She says, “We have survived all of these years without losing hope, we certainly can’t lose it now. Ten years of hardship have taught us to be stronger, to cope with life and to defeat the siege.”

But defeating the siege is not an easy endeavor, as it has “affected all aspects of our life,” according to Heba. “Many students have lost their opportunities of studying abroad. Many patients have died, waiting for the crossings to open so that they may get proper treatment. Construction is tied to the crossings, and life is now more expensive than ever.”

The consequences of the siege are far-reaching to the extent that Anas Almassri, a student-intern at the Euro-Mediterranean Human Rights Monitor in Deir al Balah, says that whatever remained of Gaza’s middle class is now dwindling. “The middle class in Gaza continues to shrink as a result of the diminishing economic opportunities, and this affects the income of families terribly, who cannot send their kids to universities and, therefore, cannot maintain their standard of living.”

For Ghada Abu Msabeh, 20, also from Deir Al-Balah, the siege has now become so rooted in the collective psyche of Gazans that it has grown to become the new norm. “I think that we have come to the point that the siege has become a part of our daily life and routine,” she argues. “I honestly cannot imagine what life would be if we are able to move freely or even go for an entire day without power outage. It is honestly difficult to remember how life used to be before the siege.”

Hana Salah, 25, a writer and humanitarian worker with Oxfam Italy, tried to seek an opportunity outside Gaza, but she was not successful. “I didn’t try again because seeing others’ attempt and fail was enough to depress me,” she says. “I feel that we are living in a cage and have no idea what is transpiring outside this cage. I don’t know what will happen, but can only hope and pray for God’s mercy.”

Some of those who were able to leave to pursue their education outside Gaza, were stuck when they attempted to return for a visit. Rafaat Alareer, a writer and lecturer, embarked on his PhD studies at Universiti Purra Malaysia in 2012, but has been trapped in Gaza since 2014. He came to visit his family as the 2014 offensive destroyed their home and killed his brother. “It’s been a year and a half now, and I cannot go back because of the siege and the closure of the Rafah crossing,” which has been practically shut down for a year.

The same was experienced by Belal Dabour, a young doctor at the Shifa Hospital, who is unable to leave Gaza to gain more experience and attend conferences, which he had hoped could bolster his academic qualifications. “I had just graduated when the 2014 war started,” he says. “It was very traumatic. What I have experienced in one month at Al-Shifa is more than what other doctors would experience in many years of their practice. But now I have no job and like many of my colleagues have no source of income.”

Walaa Al-Ghussein, a 23-year-old student at Al-Azhar University, concludes that, although more people now acknowledge the existence of a cruel siege on Gaza, life for Gazans remains the same. “We need more than just protests; real pressure needs to be exerted on Israel so that this siege ends. Hundreds of patients are dying, students are losing their opportunities of studying abroad and a whole people are stranded.”

Local journalist Yousef Aljamal in the Gaza Strip contributed to this report.