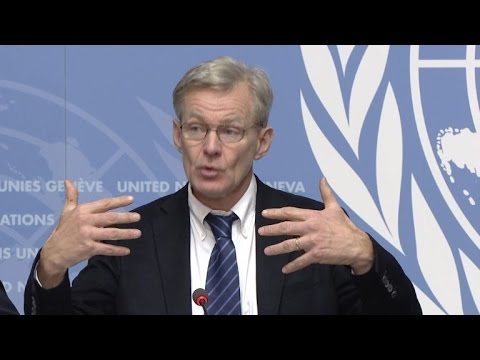 Despite international laws prohibiting the use of starvation against civilians, forces on all sides preventing aid from reaching blockaded towns in Syria, Yemen, and Iraq

As crises in the Middle East escalate, food has become a weapon of war.

A new Associated Press analysis published Friday looks at the way food supply and access is controlled by all sides in conflict and the devastating impact this tactic has on civilian populations struggling to survive behind blockades in Syria, Yemen, and Iraq.

The biggest humanitarian catastrophe by far is Syria, where a ruinous five-year civil war has killed a quarter of a million people and displaced half the population. All sides in the conflict have used punishing blockades to force submission and surrender from the other side — a tactic that has proved effective particularly for government forces seeking to pacify opposition-held areas around the capital Damascus.

Earlier this month, United Nations (UN) aid groups visited several besieged Syrian towns on a humanitarian mission. That included Madaya, a town northeast of Damascus with a population of 40,000, where recently released images of the starving populace—particularly the malnourished children—gained international attention.

After returning from that trip, UN Secretary General Ban Ki-moon said the use of food as a weapon in conflict constitutes a “war crime.”

“U.N. teams have witnessed scenes that haunt the soul,” Ban said. “The elderly and children, men and women, who were little more than skin and bones: gaunt, severely malnourished, so weak they could barely walk, and utterly desperate for the slightest morsel.”

While sieges are considered by the military to be a viable tactic to prevent further unrest in conflict zones, the forces carrying out the blockades are expected to operate under international humanitarian law.

The United Nations estimates more than 400,000 people are besieged in 15 communities across Syria, roughly half of them in areas controlled by the Islamic State group. In 2014, the U.N. was able to deliver food to about five percent of people in besieged areas, while today estimates show the organization is reaching less than one percent.

In 2015, the World Food Program [WFP] was forced to reduce the size of the food rations it provides to families inside Syria by up to 25 percent because of a funding shortfall. The agency says it has to raise $25 million every week to meet the basic food needs of people affected by the Syrian conflict.

In Yemen, some 14.4 million civilians—more than half the population—are “food insecure,” a jump of 12 percent in eight months, according to the UN’s Food and Agriculture Organization. An additional 7.8 million face “life-threatening rates of acute malnutrition.”

Access to water and fuel also remain scarce in the country, according to the WFP. And a new report by UN experts, published earlier this week, found that Yemenis are being subjected to tactics that “constitute the prohibited use of starvation as a method of warfare.”

WFP executive director Ertharin Cousin on Wednesday told the UN security council that the organization’s work in Syria was being disrupted because the UN was falling short of its own resolutions “not to impede or hinder” humanitarian assistance efforts.

“To prevent people from imminent starvation, we need the support and action of every Council Member and every Member State,” Cousin said. “Preventing mass starvation requires more than a four-town agreement…. Preventing a humanitarian crisis as well as a food security and nutrition crisis requires a cessation of attacks on civilian infrastructure.”

It requires “freedom of movement for all civilians and the immediate lifting of all sieges by all parties,” Cousin continued. “This is the only way to end hunger and to treat malnutrition.”

James Sadri, director of the Syria Campaign, a peace advocacy group, told the media outlet Syria Deeply earlier this month that the UN was failing Syrians in a “dramatic way.”

“People are now talking about Madaya, but there are 1 million people currently living under siege, where starvation is being used as a weapon of war,” Sadri said.