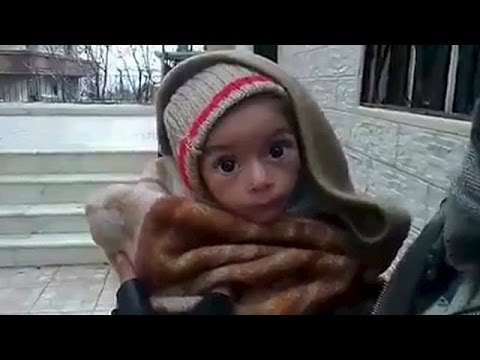 France24 Arabic reports that the Syrian government agreed Thursday to allow humanitarian aid into Madaya and two other besieged towns near the Lebanese border northwest of Damascus. The step was praised by the United Nations.

The siege of Madaya, pop 40,000, has been going on for two years. It and Zabadani are Sunni Arab population areas that joined the rebellion against the regime of Bashar al-Assad. However, as the struggle turned into civil war, the fighters were radicalized. The towns became divided into quarters, some of which supported the Nusra Front (Syrian al-Qaeda) while others supported the Syrian Freemen (Ahrar al-Sham). The two hard line Salafi jihadi groups have a visceral hate for Shiites. Fear that they would make incursions into Lebanon brought Hizbullah across the border to join the siege. The location of the towns also makes them a threat to the capital.

When pressed on the starvation tactics, Hizbullah maintained that the 600 armed terrorists in Madaya have taken the town hostage and is primarily responsible for the plight of the townspeople.

In other words, Hizbullah has brazenly stolen from Israel the “terrorists are using human shields” argument!

On the other hand, Hizbullah’s allegation is correct that Shiite towns in Idlib are also under similar sieges. But two wrongs don’t make a right.

The war in Syria is horrible. Among the warring sides, there is no longer much to choose from. The 600 mostly Salafi fighters in Madaya, some large proportion of whom went over to al-Qaeda, aren’t very sympathetic from an American point of view.

But the children in Madaya and the non-combatants don’t deserve to be starving. It might make the war go faster if you starve out the guerrillas, but it is a war crime to do that to innocents.

Good that the regime and Hizbullah finally relented. But they should do more, they should let all the non-combatants leave who want to leave. The reports are that they are shooting those who try to depart.

BBC Monitoring reported on Jan. 4, based on Arabic press sources:

“Residents of the Syrian city of Madaya – near Damascus are starving to death, pan-Arab and local social media sources are saying.

Madaya is located close to the city of Al-Zabadani which was part of a multi-phase truce agreement between the Syrian government and armed opposition forces. The second phase of the agreement, which also included Madaya was supposed to allow aid into the besieged areas.

On 2 January, Qatar-based Al-Jazeera TV broadcast a video report showing images of people who it said suffered severe weight loss and death due in the areas of Madaya, Al-Zabadani and nearby town of Buqayn which “seems to be paying the price of its strategic location between Damascus and Beirut”. The report said that given that their pleas for help were not answered, “the people were forced to eat tree leaves, garbage and even dogs and cats meat”. It added that the months-long government siege of the city is not allowing in even children’s milk.

News of at least two people dying out of huger and lack of food supplies was also reported by several media outlets.

Paris-based independent Syrian Rozana FM website quoted activists inside the city as saying that “two of Madaya residents had died due to severe cold and hunger”. It added that the snow and low temperature seen in Syria in the past couple of days “made the situation worse”.

On 3 January, Turkey-based Huffington Post in Arabic website quoted an activist in Madaya as saying that “the price of one kilogram of rice has reached over 100 US dollars.”

According to the Syrian Observatory for Human Rights (SOHR), even those who try to save their life by fleeing the city are being shot dead on their way out. On 4 January, the SOHR website said that three civilians -including a pregnant woman and her child- were shot dead by the government and Lebanese Hezbollah forces as they were “trying to get out of the town”. SOHR added that the death of the three “raises the total number of people who died in the city since the start of the siege to at least 23″. It listed explosions, sniper fire, poor sanitary conditions and the lack of food and necessary treatment as causes for the deaths.

The dire situation in Madaya prompted social media activists to launch the Arabic hashtag #Madaya to shed light on the plight of its inhabitants. The hashtag was used over 25,000 times in five days. . .”

“Al-Madaya plight also raised calls for vengeance as the Islamic Judge of the alliance of Jaysh al-Fath, which includes Al-Qa’idah-linked Al-Nusrah Front and Islamist Ahrar al-Sham Movement, posted a series of tweets on 2 January to call for the destruction of the Shi’i populated village Al-Fu’ah in Idlib countryside if the siege on Madaya is not lifted.

An agreement between the Syrian opposition and the government, as well as Iran and Lebanon’s Hezbollah, to ease the siege on the opposition in the strategic town of Al-Zabadani and Madaya in southern Syria near the Lebanese border in exchange for the opposition doing the same for the two Shi’i villages, Al-Fu’ah and Kufrayah in the northwestern province of Idlib was announced last summer. Implementation of the deal reportedly started late December though.”

Euronews: “Madaya, a town on the brink of starvation, granted UN food aid by Assad”