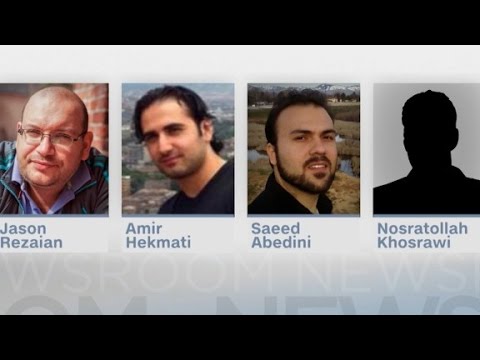 Iranian news agencies announced Saturday that the government had released four dual nationals (Iranian-Americans with both passports). A fifth release was later reported. The release is another major diplomatic victory for President Obama and Sec. of State John Kerry, and is good news indeed for the families of the former detainees.

The first to be identified was Jason Rezaian of the Washington Post.

The move came as the great Powers assembled in Vienna to consider whether Iran has met all of its obligations under the nuclear deal signed with the United Nations Security Council, but Jessica Schulberg of HuffPo says that the timing is only a coincidence.

Schulberg has followed the negotiations in secret for several months, helped by a State Department whistleblower, Chase Foster, who resigned his job late last year out of despair over the negotiations proving successful and, apparently, lack of faith in John Kerry to pull them off. Unbeknownst to Foster, Schulberg used his revelations to develop higher-level State sources who could reassure her that the negotiations were ongoing and likely would succeed. President Obama postponed sanctions on Iranians involved in long-range missile work, planned for late December, for fear that new sanctions would scuttle the release. Huffington held the story until Saturday out of concern that an early revelation of the talks would scuttle them.

The US is releasing 7 Iranians from jail who had been convicted of sanctions violations, so that the affair looks like a Cold War style prisoner exchange.

Absentee Florida senator and GOP candidate Marco Rubio condemned the prisoner swap as creating an incentive for hostage-taking. I think Ike Eisenhower did a prisoner exchange, with Pyongyang of all people. I think Ike was tougher than Rubio, too.

The release seems to be further evidence of an ascendancy in Iran of President Hassan Rouhani and Foreign Minister Javad Zarif, both of whom want Iran to have better relations with the outside world. They have been opposed by hardliners who perceive themselves to benefit from polarization and bad Iran-West relations. Despite their substantial weight in Iranian politics, the hard liners appear to have been curbed, for the moment, by Ayatollah Ali Khamenei, Iran’s leader, who is now invested in the success of Rouhani’s nuclear deal and the end of international sanctions. Khamenei appears to have been deeply shaken by the summer, 2009, Green Movement against the alleged stealing of that year’s presidential election, and appears to have feared that steep US and international sanctions could turn the public against his government. Although he forbade further negotiations with the US after the nuclear deal was reached, to appease the hard liners, Khamenei appears to have grandfathered in the track II prisoner release talks.

That the Obama administration did not include the fate of the Iranian-American prisoners in the negotiations over Iran’s nuclear enrichment program has been sharply criticized by Republican presidential candidates including Donald Trump. Trump, with his usual bluster, guaranteed he would return the detainees to the US if he were elected, though he did not say how he would accomplish that feat, except that he apparently is really good at making deals.

It now turns out that Obama and Kerry were working extremely hard to get the prisoners out and were having side meetings over the issue with the same officials with whom they were negotiating the enrichment deal. A lot of people, including Democrats, owe Obama and Kerry a big apology.

The Obama administration concluded that the nuclear negotiations were difficult enough without tying them to a prisoner release; that there was a danger of the latter becoming leverage for Iran; and that if the two were bundled, then if the nuclear deal fell through, it would doom the Americans detained. These thoughtful considerations were, in the event, entirely correct.

Rezaian, 39, outrageously, was arrested for espionage and held for over 500 days. Initially, his wife, Yeganeh Salehi (also a journalist, for The National in Dubai) was arrested with him, along with two photojournalists, but the other three were released.

Last May his trial began, and in September or October he was secretly sentenced to an unspecified term in the dreaded Evin prison where political prisoners are held, in proceedings his defense attorney characterized as “farcical.”

Iranian security forces and the judiciary are peopled by paranoids and conspiracy nuts.

In recent months his health has been deteriorating, with alarming weight loss and blood pressure problems. He appears to have been psychologically and physically abused in prison.

Rezaian was born in the United States and grew up in Northern California but held both his ancestral and US nationalities. He worked as a freelancer for the San Francisco Chronicle and Slate before being hired as a correspondent by the Washington Post.

He was allowed a visit by his mother and wife on Christmas day this past December.

Also released were Saeed Abedini, an evangelical preacher from Boise, Idaho; Amir Hekmati, a veteran from Flint, Michigan; and Nosratollah Khosravi (this last individual had not been the subject of press coverage). A fifth person was said to have been released later on Saturday.