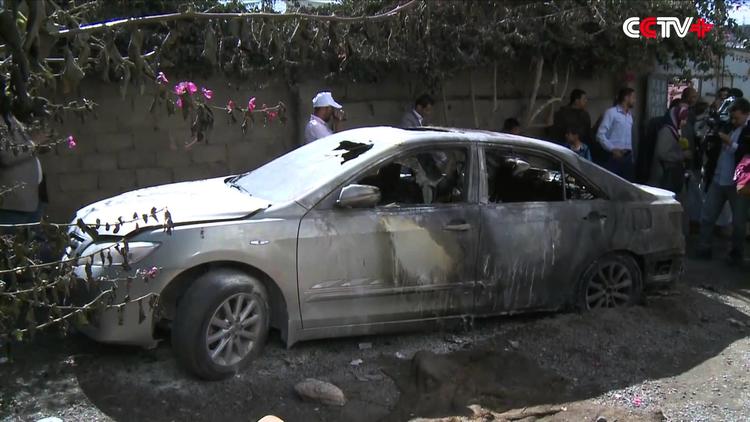 (Beirut) – Saudi Arabia-led coalition forces airdropped cluster bombs on residential neighborhoods in Yemen’s capital, Sanaa, early on January 6, 2016. It is not yet clear whether the attacks caused civilian casualties, but the inherently indiscriminate nature of cluster munitions makes such attacks serious violations of the laws of war. The deliberate or reckless use of cluster munitions in populated areas amounts to a war crime.
Markings on a remnant of a CBU-58 cluster bomb found near al-Zira`a Street in Sanaa on January 6, 2016 indicating that it was manufactured in 1978 at the Milan Army Ammunition Plant in the US state of Tennessee.
Expand

Markings on a remnant of a CBU-58 cluster bomb found near al-Zira`a Street in Sanaa on January 6, 2016 indicating that it was manufactured in 1978 at the Milan Army Ammunition Plant in the US state of Tennessee.
© 2016 Private

“The coalition’s repeated use of cluster bombs in the middle of a crowded city suggests an intent to harm civilians, which is a war crime,” said Steve Goose, arms director at Human Rights Watch. “These outrageous attacks show that the coalition seems less concerned than ever about sparing civilians from war’s horrors.”

Residents of two Sanaa neighborhoods described aerial attacks consistent with cluster bomb use. A resident of al-Zira`a Street told Human Rights Watch that his family was awakened at 5:30 a.m. on January 6 by dozens of small explosions. He said that he had been at work, but that his wife told him that when the family fled they saw many homes and a local kindergarten with newly pockmarked walls and broken windows.

“The coalition’s repeated use of cluster bombs in the middle of a crowded city suggests an intent to harm civilians, which is a war crime. These outrageous attacks show that the coalition seems less concerned than ever about sparing civilians from war’s horrors.”

A resident of Hayal Sayeed, another residential neighborhood, described hearing small explosions at around 6 a.m. He went out on the street, he said, and saw more than 20 vehicles covered in pockmarks, including his own, as well as dozens of pockmarks in the road. He said that at least three houses in the area had pockmarked walls and broken windows. He found a fragment in his car, he said.

The al-Zira`a Street resident said that neither neighborhood had been hit by airstrikes before January 6. The nearest military installations, a small office, and a garage used by military guards, were about 600 to 800 meters from the al-Zira`a Street neighborhood. Even if the attacks were directed at the military targets, the use of cluster munitions meant they were still unlawful, Human Rights Watch said.

The al-Zira`a Street resident said that at the time of the attack he had been at his office, about 2 or 3 kilometers from Hayal Sayeed and 5 kilometers from al-Zira`a Street. Every 10 to 15 minutes he heard small explosions, until about 1:30 p.m. “These did not sound like regular gunfire,” he said. “I asked my colleagues if they could hear them too – they said yes.”

A third cluster bomb attack on January 6 was reported on social media by residents of Sanaa’s al-Thiaba neighborhood, although Human Rights Watch could not confirm this.

Human Rights Watch viewed photographs taken on January 6 in Sanaa that showed unmistakable remnants of cluster munitions, including unexploded submunitions, spherical fragmentation liners from submunitions that broke apart on impact, and parts of the bomb that carried the payload.

Human Rights Watch identified the munitions as from US-made BLU-63 antipersonnel/anti-materiel submunitions and components of a CBU-58 cluster bomb. Markings on the bomb remnants indicate that it was manufactured in 1978 at the Milan Army Ammunition Plant in the state of Tennessee in the United States.

Each air-dropped CBU-58 cluster bomb contains 650 submunitions. The United States transferred 1,000 CBU-58 bombs to Saudi Arabia sometime between 1970 and 1995, according to US export records obtained by Human Rights Watch. The US is a party to the armed conflict in Yemen, playing a direct role in coordinating military operations, and as such, is obligated to investigate alleged violations of the laws of war in which its forces took part.

The CBU-58 cluster bomb and BLU-63 submunition were developed by the US during the Vietnam War and are designed to attack personnel and lightly protected materiel. The submunitions also contain 5-gram titanium pellets that produce an incendiary effect on flammable targets.

In 2015, Human Rights Watch documented the use by coalition forces of three types of cluster munitions in Yemen. Amnesty International documented the coalition’s use of a fourth type. A fifth type of cluster munition has been used, but the user’s identity is unclear. A US Defense Department official, speaking on the condition of anonymity, told U.S. News and World Report in August that “the U.S. is aware that Saudi Arabia has used cluster munitions in Yemen.”
BLU-63 submunitions that broke apart on impact after being dispersed by CBU-58 cluster bombs in the Hayal Sayeed neighborhood of Sanaa on January 6, 2016.
Expand

BLU-63 submunitions that broke apart on impact after being dispersed by CBU-58 cluster bombs in the Hayal Sayeed neighborhood of Sanaa on January 6, 2016.
© 2016 Private

Neither Yemen, Saudi Arabia, nor any of the other coalition countries are party to the 2008 Convention on Cluster Munitions, the international treaty banning cluster munitions. A total of 118 countries have signed and 98 have ratified the treaty. Human Rights Watch is a co-founder of the Cluster Munition Coalition and serves as its chair.

On November 17, the US Defense Department announced that the State Department had approved a sale of US$1.29 billion worth of air-to-ground munitions, such as laser-guided bombs and “general purpose” bombs with guidance systems – none of which are cluster munitions. The US should not sell aerial bombs to Saudi Arabia in the absence of serious investigations into alleged laws-of-war violations in Yemen, Human Rights Watch said.

The UN Human Rights Council should create an independent, international inquiry into alleged violations of the laws of war by all sides.

“It may have been 20 years since the US last provided these cluster munitions to the Saudis, but they are being used to kill civilians now,” Goose said. “The US, as a party to the conflict, should be demanding that the coalition immediately stop using these weapons or risk becoming complicit in their use.”