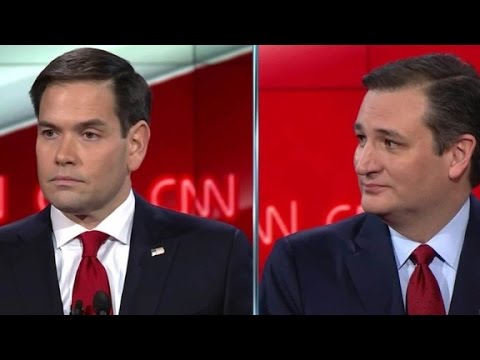 The problem with promoting Cruz and Rubio as “Latino leaders” is that they have turned their backs on the Latino community with their policy positions.

In the primary race for the Republican nomination for the president, it was noted that in the Iowa caucuses Senators Ted Cruz of Texas and Marco Rubio of Florida placed first and third respectively with both earning over half of the Iowa GOP caucus goers’ support. This week in New Hampshire, Cruz placed second and Rubio came in a disappointing fifth place. Yet, there has been some speculation that the first Latino president or vice president could be a Republican, and in La Opinión, one of the oldest Spanish language daily papers in the U.S., there was a piece titled, “Why don’t we celebrate Cruz’s victory in Iowa?”

The problem with promoting Cruz and Rubio as “Latino leaders” is that they have fundamentally turned their backs on the Latino community with their policy positions. For instance, Cruz has said that he would triple the border patrol, put in place a biometric identifying system, and deport “criminal, illegal aliens.” Rubio has turned his back on the immigration bill that he co-sponsored in 2013, which would have given a pathway to citizenship to millions of undocumented immigrants. Rubio, like Cruz, has also called for more immigration enforcement even though the Obama administration has set records for deportations. For children of immigrants, these candidates have effectively distanced themselves from the immigrant community, of which Latinos constitute a large percentage.

When it comes to issues other than immigration, Cruz and Rubio have consistently remained to the right of the larger Latino community in the U.S. Both candidates have campaigned against Obamacare, the President’s signature health care law that has given the Latino community the largest gains in insurance coverage since enrollment in the program began in 2013. Latinos have been supportive of raising the minimum wage with 84 percent indicating that it should be increased to $10.10 an hour. Both Cruz and Rubio voted against a proposal to raise the minimum wage in 2014.

Jeff Kuhner is talking up Ted Cruz’s appeals to Latinos in a general election, saying he can’t lose because of it. https://t.co/LNkyN0ZU3v

And beyond policy, Cruz has never identified as a Latino. Born Rafael Edward Cruz to an Irish-American mother and Cuban father, and known as a child by the nickname ‘Felito,’ Cruz opted to be called Ted when he was 13. On the other hand, Rubio has been more apt to bring up his parents’ immigration story and speak in Spanish on the campaign trail, but his Latinidad is rooted in his Cuban heritage and shaped by representing Florida, a state where 31 percent of Latinos identify as Cuban and 27 percent of Latinos identify as Puerto Rican. About a quarter of Florida’s population is Latino.

The majority group that falls under the “Latino umbrella” in the U.S. is Mexican-American or Chicano. People of Mexican origin are nearly two-thirds of the Latino population in the U.S., and a majority of Mexican-Americans live in the Western states. Only 3.7 percent of Latinos in all of the U.S. are of Cuban origin.

Mexicans do not enjoy the special immigration privileges that Cubans do, despite sharing a border with the U.S. Under the “wet feet, dry feet” policy, Cubans are not subject to deportation once they arrive on U.S. soil, whereas Mexicans migrating to the U.S. to escape poverty or drug war violence without documentation are subject to removal by Immigration and Customs Enforcement.

Some Mexican Americans can trace their ancestry in the U.S. to a time when the Southwestern states belonged to Mexico, which means that their roots in this country pre-date those of both Cruz and Rubio.

When pundits and the political establishment assume that because Cruz and Rubio share Spanish surnames and can be classified as Latino, it cannot be taken for granted that people of Mexican descent view them as members of their community. Furthermore, many Mexicans call themselves Chicano, rejecting the government label of Hispanic or the preferred term in the media, Latino. The term “Chicano” comes from the word Mexica, the name for the Indigenous people of Mexico who inhabited the region prior to the arrival of the Spanish. Chicano acknowledges the Indigenous ancestry of Mexicans. In addition, Chicano is often considered a term of self-determination and recalls the struggles of the Chicano movement in the 1960s and 1970s when this community was fighting against police brutality, protesting the war in Vietnam, and demanding that their history be taught in schools. Cruz and Rubio have done nothing to acknowledge the history of the Chicano movement or the political battles fought by members of the largest group of Latinos in the U.S.

It might be convenient for the political establishment and the media to portray Cruz and Rubio as Latino leaders. However, the majority of people who are classified under this label largely reject both candidates and the policies that they promote. When Cruz and Rubio are advanced as Latino leaders, it sets Mexican-Americans up to be represented by candidates who do not share their history and current struggle. Politically conscious Chicanos will not go along with the staging of Cruz and Rubio as members of their community in this election cycle because these candidates have never shown solidarity with them, nor are they signaling in their campaign rhetoric that they are inclined to in the future.