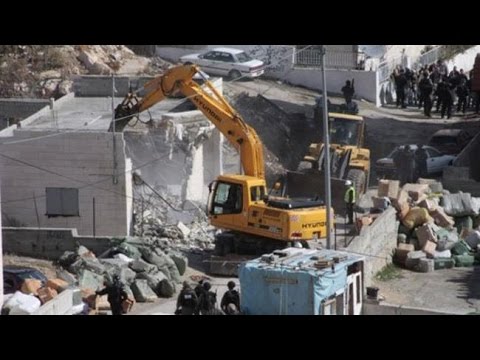 BETHLEHEM (Ma’an) — Over 400 Palestinians in the occupied West Bank have been displaced due to Israeli demolitions during the first six weeks of this year, a senior UN official said Wednesday.

Coordinator for Humanitarian and UN Development Activities for the occupied Palestinian territory Robert Piper in a statement called the number of demolitions “alarming.”

The number of Palestinians displaced in 2016 is already equivalent to over half of the total number displaced in all of 2015, the official said.

Piper called on Israel to immediately halt all demolitions in the occupied West Bank, which he said were in violation of international law.

“Most of the demolitions in the West Bank take place on the spurious legal grounds that Palestinians do not possess building permits,” Piper said.

“But, in Area C, official Israeli figures indicate only 1.5 percent of Palestinian permit applications are approved in any case. So what legal options are left for a law-abiding Palestinian?”

The UN documented 283 homes and other structures destroyed, dismantled, or confiscated between Jan. 1 and Feb. 15, many of which were located in the Jordan Valley.

The measures displaced 404 Palestinians, including 219 children. Another 1,150 Palestinians were also affected after losing structures related to their source of income, according to the UN.

The destruction was focused in 41 locations, many in Palestinian Bedouin or herder communities in Area C, the over 60 percent of the West Bank under full Israeli military control.

A number of demolitions carried out took place in Palestinian communities whose land has been designated by Israel as “closed military zones,” where military exercises have historically been carried out in effort to drive Palestinians from their land.

“International law is clear — Palestinians in the West Bank have the right to adequate housing and the right to receive humanitarian assistance,” said Piper.

“As the occupying power, Israel is obliged to respect these rights,” the UN official said.

Repeated calls by international bodies for Israel to cease the displacement of Palestinians living in the occupied Palestinian territory have done little in the past to stop ongoing demolitions or settlement expansion onto Palestinian land.

The EU earlier this week condemned Israeli policy regarding demolition and settlement expansion that the body said made the possibility for an independent Palestinian state impossible.