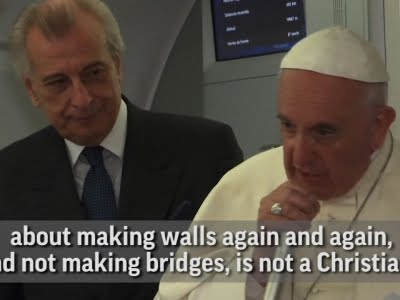 Billionaire bigot Donald Trump’s tiff with Pope Francis continued on Thursday, though Trump appears to have gotten cold feet about taking on the Pontiff toward the end of yesterday.

The reason this dispute is important is that Trump cannot win the presidency with only the backing of white Protestants, and he has now alienated everyone else. As Mark Gray points out, the country has changed dramatically, so that white Protestants are no longer a majority:

US Catholics typically split 50/50 between Democratic candidates and Repubican ones in presidential elections. White Protestants split 40/60 in favor of Republicans. Everyone else, 26% of the electorate, skews heavily Democratic. Latinos have been trending Democratic, and Trump and Carson have probably pushed them further in that direction and also have energized Latino voters to come to the ballot box.

Only about 25% of the 80 million US Catholics are solid Conservatives, with another 35% saying they are “moderates.” About 50% of Catholics vote Republican in presidential contests.

So the only ways a Republican can win the presidency are either to pull members of the Catholic working and lower middle class the way Reagan did, or to get a substantial Latino vote, the way George W. Bush did.

After his performance this week, Trump probably has little shot at either. He is thus left with 60% of White Protestants, at most, and probably will get few votes from the other major groups if he is that standard-bearer (non-Christians include Jews, members of Asian religions, and a growing segment of people who answer “none” when asked their religion in polls– all of them vote heavily Democratic). This would be a blow-out for the Democrats even more extensive than the 1964 trouncing of Goldwater by Johnson.

The brouhaha won’t affect Trump in largely Protestant South Carolina, but my guess is that the “moderate” swing vote among Catholics is now likely to swing elsewhere.

The whole thing started when Pope Francis went to Mexico and spoke out about the plight of Mexican labor migrants to the US, complaining about the “human tragedy” of migrants who flee their homes for environmental reasons.

Trump accused the Pope of being an agent of Mexico and said that the government there had only told Pope Francis “one side of the story:”

“He didn’t see the crime, the drug trafficking and the negative economic impact the current policies have on the United States. They are using the pope as a pawn and they should be ashamed of themselves for doing so, especially when so many lives are involved and when illegal immigration is so rampant.”

(Actually, the evidence is that in recent years more Mexicans have left the US than have come in; and immigrants typically have a low crime rate because they are afraid of being deported).

Trump also went on the offensive, saying “For a religious leader to question a person’s faith is disgraceful.”

But Trump has been going around questioning Ted Cruz’s religious faith, saying it is inconsistent for him to tell bald-faced lies and then to represent himself as a Christian

And, I don’t know if Trump has heard of excommunication, but it is a prerogative of the pope to, like, question people’s faith.

Then Trump went medieval, shouting, “If and when the Vatican is attacked by ISIS, which as everyone knows is ISIS’s ultimate trophy, I can promise you that the pope would have only wished and prayed that Donald Trump would have been president because this would not have happened.”

ISIL has talked in its braggart way about taking the Vatican, but Italian police maintain that there is no evidence of an immediate danger to the Pope.

“On the plane coming back from Mexico, a reporter asked the Pope about the charge: “Am I a pawn of the Mexican government? I leave that to your judgement, to the people to judge.”

Responding to Trump’s charge of being politicized, the Pope added, “Thanks be to God if that is what he said, because Aristotle defined man as a political animal: at least I am a human person.”

JEB! took Trump’s side against Pope Francis, despite being a Catholic himself.

By Thursday evening I presume someone showed Trump the above population chart, because he was talking about what a “great guy” Pope Francis is. But my guess is that it is too late.

AP: Pope: Trump ‘Not Christian’ for Wanting a Wall