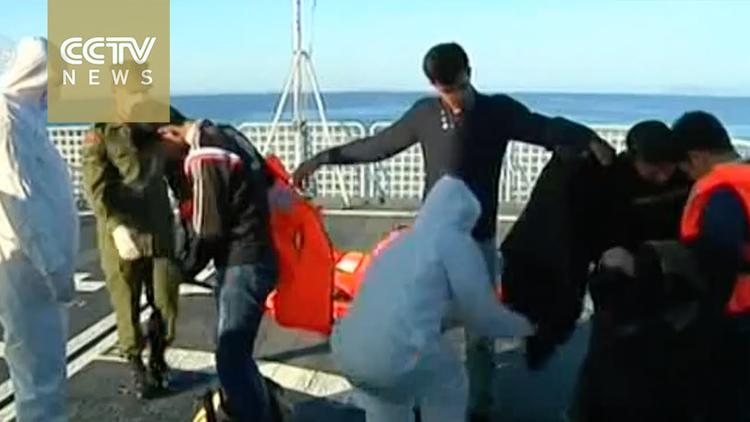 As EU and Turkey barter over migrant lives, campaigners decry pay-outs and border closures as ‘unconscionable’

Leaders from the European Union and Turkey on Monday held negotiations over what to do with the unprecedented wave of migrants fleeing war and violence in the Middle East, bartering over new proposals slammed by campaigners as “obscene” and “inhumane.”

At the emergency summit in Brussels, Belgium, EU ministers promised Turkish Prime Minister Ahmet Davutoğlu €6 billion (or $6.6 billion) over three years, twice the amount initially offered, to “keep refugees out of Europe.” Davutoğlu reportedly upended the talks when he arrived in Brussels with new demands after the EU’s draft summit deal was floated late last week.

Davutoğlu reportedly told EU leaders that, in exchange for the additional funds, Ankara “was willing to take back all migrants coming from Turkey from a set date who are denied asylum in Europe, as well as those intercepted in its territorial waters,” diplomats told Reuters. EU leaders are also reportedly considering a request to “take in one Syrian refugee directly from Turkey for each one Turkey takes back from Greece’s Aegean islands.”

Nick Dearden, director of the international social justice organization Global Justice Now, said that the proposal not only puts more money in the hands of an “increasingly brutal Turkish government,” but also allows Europe to “offload its international responsibilities onto other countries.”

“It’s obscene that one of the richest parts of the world, which continues to grow wealthy from the resources of other countries, is contracting out its human rights duties to poorer countries,” Dearden said.

Turkey, he continued, is “conducting a brutal war on its Kurdish population and cracking down on any form of dissent,” referring to the news last week that Turkish authorities seized control of the opposition daily newspaper, Zaman, in what is seen as a widening crackdown on press freedom in the country. “It is unconscionable that we would give billions of pounds to this government to offload our responsibilities,” Dearden added.

In addition to the payouts, EU leaders also said they want to close off the Western Balkan route, which is taken by hundreds of thousands of migrants from Greece to Northern Europe—a move which human rights groups warned would further destabilize Greece, which continues to reel from economic depression as a result of the EU’s punishing austerity regime and where thousands are currently stranded.

Ahead of the meeting, NATO announced that it was expanding its operations to begin policing human traffickers in the Aegean Sea, where on Sunday a boat capsized off the coast of Turkey, killing 25 asylum seekers, including 10 children.

And during Monday’s summit, leaders weighed whether to expand NATO patrols further to include the Mediterranean, as well.

However, all of these proposals, Dearden warns, underscore the inequality at the core of the migrant crisis. “The militarization of the Mediterranean Sea is one more aspect of the creation of a gated community for the richest part of the world,” he said.

These proposals, he continued, “are inhumane and backward-looking; the very opposite of what a modern response to people’s movement needs to look like.”

“We need to begin opening our borders to people, creating a world where everyone can enjoy a basic standard of living, wherever they are born,” Dearden said, “regardless of what passport they possess. Unless we do so, our democracy will disintegrate.”