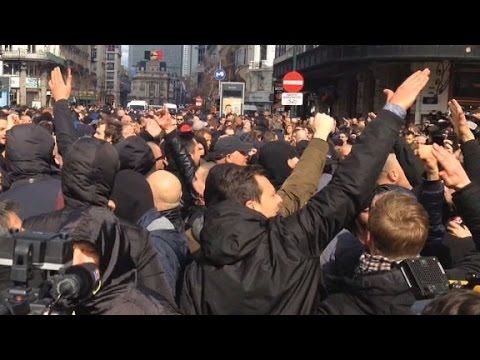 “What we feared has happened,” remarked Charles Michel, the prime minister of Belgium, in the immediate aftermath of the horrible and violent attacks on Brussels airport and the Maelbeek metro station on March 22.

Yes, indeed. Nothing is less surprising than that the vortex of terrorism and repression that has developed since the November 2015 attacks in Paris should have resulted in these new violent attacks.

But that doesn’t mean we shouldn’t consider how these circumstances came about. These events reflect several, much longer-term issues.

First of all, there is the ever more emphatic pursuit of a level of security that can never be achieved. European leaders from François Hollande to David Cameron are promising somehow to wipe away the threat of terrorism from Europe. That of course cannot happen. Only those who believe most naively in the capacities of Europe’s current intelligence structures – hovering over the incessant noise of email, mobile phone messages and the twittersphere – will believe that what has come into existence can be willed to disappear.

There is indeed a police problem – one above all of capacity and coordination – but the solution to Europe’s security crisis can never simply be more security. That has to be combined with more imaginative efforts to look at the origins of the problems. And that of course means that Europeans need to look at themselves and the societies they inhabit.

Brussels was not randomly selected for this attack. It is a prosperous, peaceful and predominantly secular city. In many ways it embodies the values that many in 21st-century Europe hold dear. But it is also home to radicalised minorities.

Most bars on most nights of the week within easy reach of the Maelbeek metro station will contain a cross-section of the successful young generations of Europe. They mix in those easily permeable domains between European institutions, lobbying and journalism.

But think also of those who are not present in those bars: the micro-communities of Europe’s margin. Some of those are well established and familiar; but others are emphatically more recent – notably the arrival in the poorer districts of central Brussels of populations from North Africa and the Middle East. These are people with relatively little interest in the society they now inhabit. And indeed Belgium seems to have little to offer to them, beyond the immediate and insubstantial opportunities of transient employment. They are the expendable populations, and they know themselves to be that.

Which brings us inevitably to Molenbeek. That one commune of the 19 which constitute the city of Brussels should have come to symbolise all its problems is in many respects unfair. What has happened in Molenbeek could easily have happened in the neighbouring communes of Anderlecht or Schaerbeek. But the wider reality is indisputable – inner-city communities often lack clear structures of governance, social solidarity and opportunity.

There is a Belgian and a European explanation for that. The Belgian dimension must focus on the manifold complexities of the Belgian state. It is inefficient and simply lacks the capacity to provide effective governance to many of the most disadvantaged populations who now live on its territory.

Belgium is not, by contemporary European standards, a conventional state. It lacks an instinctive ethos of centralism. Belgians know themselves to be diverse and are rightly proud of the fact that they do many things at a local, rather than national level. That works when the participants sign up to rather basic values of co-existence, but it fails when they contain populations who do not experience the basic amenities and opportunities which draw people into the European social contract.

But it is that social contract which has been stretched to breaking point and beyond, in Belgium and elsewhere, over the past 20 years or more. The replacement of structures of social solidarity with the relentless logic of the market, have hollowed out the ways in which the poorer communities of Brussels and many other cities across Europe have invested in their larger collective existence.

There are of course many reasons for that, most obviously the way in which the scale and diversity of migration has transformed cities into communities where there is no identifiable majority. But the larger picture, in Brussels and elsewhere, is the degree to which social inequality has generated its own dynamics of marginalisation and radicalisation.

In Molenbeek, as in many other disadvantaged communities, the emergence of cultures of militant Islam has been less a stand-alone phenomenon than the product of wider phenomena of poor schooling, limited economic opportunities and consequent petty criminality.

Previous manifestations of terrorism in Western Europe have had immediate and tangible origins. The conflicts between communities in Northern Ireland and between Basques and the Spanish state are two of the most well-known causes of the 20th Century.

It is tempting to see the current waves of terrorism as very different – the result of the sudden invasion of militant Islam. But in many respects the origins of the current violence remain just as local. They lie in the willingness of young men of immigrant populations to turn the quasi-criminal expertise learned in their formerly marginal lives to more political and violent ends.

For some, such radicalisation leads to Syria and back. For others, there is no need to travel further than across the cities of Brussels and Paris from the neighbourhoods of the marginalised to the bars, music venues and metro stations of the comfortable classes.

All of which suggests that the problems that we – a pronoun which is more exclusive than we are often inclined to recognise – confront today are not going to go away soon. The current terrorism is so amorphous and so shallow in its political affiliations that it may fade away, as those drawn towards it today are attracted to the more immediate opportunities of tomorrow.

But it is more likely that the breaking up, arrest and imprisonment of particular networks of individuals will simply be replaced by other such groups, who will similarly find in particular languages of Islam the vehicle for their angers and their emotional rejection of wider society. Putting back together Europe’s social contract might take longer than any of us would like to think.