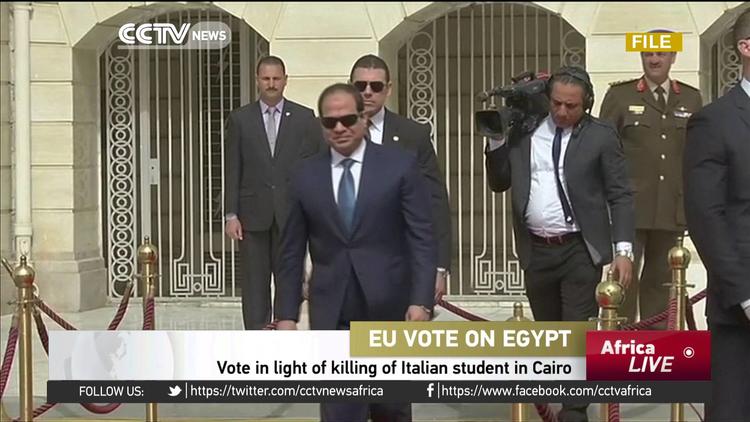 The headlines Friday about the GOP debate in Miami stressed how relatively civil it was, with less name-calling and pissing matches among the remaining candidates.

Those editors have a weird definition of civility.

So here is Marco Rubio:

“Let me give you an example of a Muslim for example, we ought to be standing with, President el-Sisi of Egypt, a president of a Muslim country who is targeting radical…

CRUZ: He’s hunting them down and stomping them.”

Gen. Abdel Fattah al-Sisi took advantage of massive popular demonstrations against Muslim Brotherhood leader and elected Egyptian president Mohammed Morsi in summer of 2013 to make a brutal military coup. His soldiers used unnecessary force to clear largely peaceful Muslim Brotherhood sit-ins, killing hundreds with live ammunition. Al-Sisi then declared the former ruling party, the Muslim Brotherhood, a terrorist organization and had his corrupt judiciary sentence thousands of its members and leaders to death. In fact, the Muslim Brotherhood renounced violence in the 1970s, and while I am critical of the way it tried to rule Egypt in 2012-2013, I consider painting it as a terrorist organization to be mere propaganda.

It is not only the Muslim Brotherhood that has suffered. The al-Sisi military junta is now the world’s second-biggest jailer of journalists for doing their job. Peaceful civil society movements such as April 6 have been forcibly disbanded and banned. Activists like Ahmad Maher, Mahinour al-Masri and Alaa Abdel Fattah, heroes of the 2011 youth protests, are behind bars being mistreated. Egypt’s newspapers are assiduously self-censoring. The country is a political and intellectual dead zone, with creepy secret police spying on everyone who makes a peep.

Even foreign academic researchers are not safe, with a young Italian academic at Cambridge, Giulio Regeni, having been kidnapped, tortured and his burned body dumped in the desert. Observers say these are the hallmarks of the secret police. The European Parliament has just urged the EU to cease military cooperation with Egypt over the young man’s murder:

So let’s get this straight. The European Parliament is so disturbed at the human rights situation that it has urged an EU cut off of military cooperation with the Egypt of Gen. al-Sisi. But this is the regime that Marco Rubio demands we admire and support.

Ironically, Rubio’s family fled a similar right wing military dictatorship, that of Fulgencio Batista, in Cuba in 1956. Batista abrogated the 1940 constitution and ruled ruthlessly, as al-Sisi does. To now have Rubio pimp for a regime just like the one his family ran away from in the 1950s is surely among the most disgusting displays in a political season full of disgusting displays.

Then there was the nauseating display of far rightwing propaganda against the poor Palestinians, many of whom were ethnically cleansed from their homes in what is now Israel by Zionist forces in 1948 and again in 1967. They have been deprived of their property and any claim to the rights of citizenship in a state by ongoing Israeli theft and confined to cantons that best resemble those imposed by Apartheid South Africa. All resistance they offer to Israeli military rule and Israeli further encroachments on what little they have left is assiduously branded as terrorism. Anyone who so much as sympathizes with the plight of the world’s largest group of stateless people is branded an inciter to terrorism. Actual terrorism (violence committed by an organized non-state group against innocent civilians for political purposes) is always wrong, and some desperate Palestinians have engaged in it (as have Israeli Jews). But people do have a right to resist occupation, and you would think from the GOP debate that it was the Palestinians who were in power and oppressing the Israelis rather than the other way around.

Rubio again attacked Donald Trump for saying he wanted to restart a peace process between Israel and the Palestinians, and that he would try to be neutral, i.e. a good faith mediator:

Rubio is of course being told to say this by wealthy far-right Jewish donors to his campaign. The idea that Palestinians should just be left under military rule or under blockade, and should continue to have their territory stolen from them by the Israelis, and that all this is their own fault, is just obscurantism in the service of the Israeli expansionists on the far right. It will one day explode on Israel with extremely unpleasant consequences, and people like Rubio will bear a good deal of the blame.

Ted Cruz menaced us with a non-existent Iranian nuclear weapons program. Any old demon will do.

Trump again defended his plans to torture prisoners and to murder their women and children.

The candidates didn’t talk so much last night about the four new wars they had proposed last week.

The poor CNN moderators were often visibly uncomfortable with the bizarre and bloodthirsty answers they got to their sober foreign policy questions.