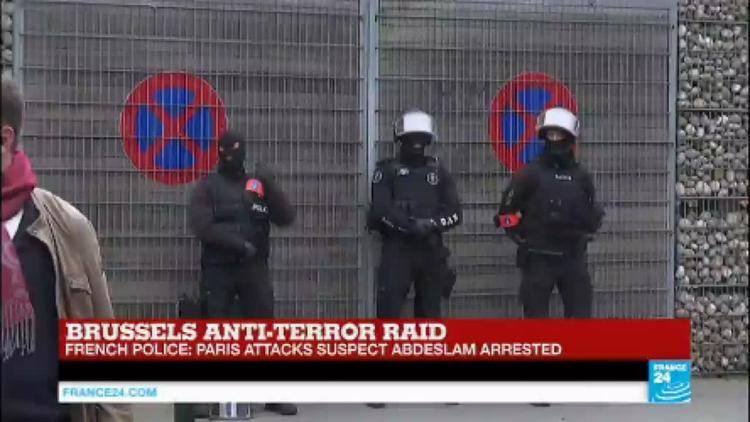 The most-wanted fugitive from November’s Paris attacks, Salah Abdeslam, was wounded and caught in a shootout in Brussels on Friday (18 March), according to the Belgian minister for asylum and immigration.

Local media reported two people had been arrested, after one of Europe’s longest and biggest manhunts.

Television footage showed masked, black-clad security forces guarding a street in the capital and reporters at the scene described white smoke rising from a rooftop.

A police spokeswoman said an operation was ongoing and could not give further details.

Belgian Secretary of State for Asylum, Migration and Administrative Simplification Theo Francken tweeted, “We have him”.

Hollande declined to comment on the suspect’s capture when asked by journalists at the European Council summit, which was just finishing up when the news broke about Abdeslam.

Belgian police had found finger prints belonging to Abdeslam at the scene of shootout earlier this week, prosecutors said.

The Belgian federal prosecutor’s office also said an Algerian killed during that earlier operation at an apartment in Brussels on Tuesday was probably one of the people French and Belgian investigators were seeking in relation to the [attacks of Daesh or the so-called] Islamic State . . . in Paris on November 13.

It later said in a separate statement that Mohamed Belkaid was probably the man who went under the name of Samir Bouzid and was killed on Tuesday.

Public broadcaster RTBF said it had information that Abdeslam, whose elder brother blew himself up in Paris, was “more than likely” one of two men who police have said evaded capture at the scene before a sniper shot dead 35-year-old Belkaid as he aimed a Kalashnikov.

Other Belgian media were more cautious, however, saying only there was evidence Abdeslam had been there.

A man named Samir Bouzid has been sought since December when police issued CCTV pictures of him wiring cash from Brussels two days after the Paris attacks to a woman who was then killed in a shootout with police in the Paris suburb of St. Denis.

She was a cousin of Abdelhamid Abbaoud, a Belgian who had fought in Syria and is suspected of being a prime organiser of the attacks in which 130 people were killed. Both died in the apartment in St. Denis on Nov. 18.

France’s BFM television said the fingerprints were found on a glass in the apartment, where four police officers, including a Frenchwoman, were wounded when a hail of automatic gunfire hit hem through the front door as they arrived for what officials said they had expected to be a relatively routine search.

Belgian officials said earlier in the week that police had not expected to find armed suspects at the apartment and that the presence of French officers was not an indication the raid was of special importance to the investigation.

Abdeslam’s elder brother was among the suicide bombers who killed themselves in Paris during a shooting rampage in which 130 people died. The younger Abdeslam was driven back to Brussels from Paris hours later.

Belgian authorities are holding 10 people suspected of involvement with him, but there has been no report of the fugitive himself being sighted. There has long been speculation in Belgium that he could have fled to Syria.

Investigators believe much of the planning and preparation for the November bombing and shooting rampage in Paris was conducted in Brussels by young French and Belgian nationals, some of whom fought in Syria for [ISIL].

The attack strained relations between Brussels and Paris, with French officials suggesting Belgium was lax in monitoring the activities of hundreds of militants returned from Syria.

Brussels, headquarters of the European Union as well as Western military alliance NATO, was entirely locked down for days shortly after the Paris attacks for fear of a major incident there. Brussels has maintained a high state of security alert since then, with military patrols a regular sight.

Via Euractiv and Agencies