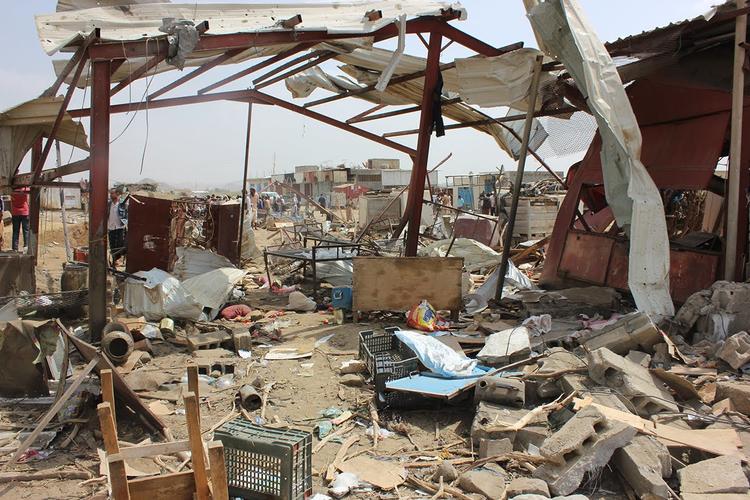 “One of the deadliest strikes against civilians in Yemen’s year-long war involved U.S.-supplied weapons”

The year-long campaign of Saudi-led airstrikes in Yemen reached a new low last month with a deliberate attack on a marketplace full of civilians that killed over 100, including 25 children, and a new [HRW] report has found that the bombs that did the killing came from the United States.

“The U.S. and others should pull the plug on arms to the Saudis or further share responsibility for civilian lives lost.”
—Priyanka Motaparthy,
Human Rights WatchHuman Rights Watch released the report on Thursday. Its findings detailed how the March 15 airstrike on a civilian target was made with U.S.-supplied weaponry, and renewed calls for an embargo on weapons to Saudi Arabia.

“One of the deadliest strikes against civilians in Yemen’s year-long war involved US-supplied weapons, illustrating tragically why countries should stop selling arms to Saudi Arabia,” said Priyanka Motaparthy, emergencies researcher at Human Rights Watch. “The U.S. and other coalition allies should send a clear message to Saudi Arabia that they want no part in unlawful killings of civilians.”

The rights group spoke to the airstrike’s victims and witnesses and showed footage of what it identified as U.S.-made bomb fragments:

The group “conducted on-site investigations on March 28, and found remnants at the market of a GBU-31 satellite-guided bomb, which consists of a US-supplied MK-84 2,000-pound bomb mated with a JDAM satellite guidance kit, also US-supplied,” Human Rights Watch wrote. “A team of journalists from ITV, a British news channel, visited the site on March 26, and found remnants of an MK-84 bomb paired with a Paveway laser guidance kit.”

“If confirmed, the use of 2,000-pound bombs would reflect a decision by the Saudi-led coalition that carried substantial risks for civilians,” the New York Times writes.

“The 2,000-pound general-purpose bomb, of the American standard Mark 80 series, is the largest of its class. American warplanes typically carry smaller bombs, often in the 500-pound class, in part to reduce property damage and dangers to noncombatants,” the newspaper points out.

There have been outraged calls for an embargo on weapons sales to Saudi Arabia in response to its bombing campaign in Yemen, most notably from the E.U. and the Netherlands, but the U.S. has remained silent and continued to sell weapons to the Saudis.

In fact, the U.S. is deeply intertwined with Saudi Arabia’s bombing campaign in Yemen, including “specific military operations, such as providing advice on targeting decisions and aerial refueling during bombing raids,” Human Rights Watch says.

Despite that involvement, the U.S. continually argues that it is not responsible for the atrocities committed in Yemen by the Saudi-led coalition carrying out the airstrikes.

Indeed, a spokesperson for the United States Central Command, or Centcom, told the Times on Thursday that the “decisions on the conduct of operations to include selection and final vetting of targets in the campaign are made by the members of the Saudi-led coalition, not the United States.”

However, Human Rights Watch argues, the United States’ involvement is such that it could be culpable for the Saudis’ war crimes. The group writes, “U.S. participation in specific military operations, such as providing advice on targeting decisions and aerial refueling during bombing raids, may make U.S. forces jointly responsible for laws-of-war violations by coalition forces. As a party to the conflict, the U.S. is obligated to investigate allegedly unlawful attacks in which it took part.”

“Even after dozens of airstrikes on markets, schools, hospitals, and residential neighborhoods have killed hundreds of Yemeni civilians, the coalition refuses to provide redress or change its practices,” Motaparthy argued. “The U.S. and others should pull the plug on arms to the Saudis or further share responsibility for civilian lives lost.”

Critics say the United States’ lack of concern for civilian lives lost is par for the course: on Thursday another human rights group, Reprieve, called attention to the U.K.’s involvement in the United States’ covert drone program in Yemen and its killing of unknown civilians. An investigation found that “‘multiple kills’ of named targets are common in the U.S. drone program, with some 1,147 unknown people killed in attempts to target 41 named individuals,” the group reports.

“Asked about the issue last weekend,” writes Reprieve, “President Obama said that there was ‘no doubt’ that civilians had been killed by U.S. drones.”