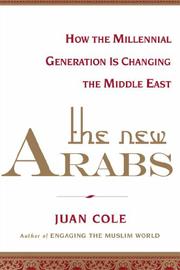 The annual Arab Youth survey conducted by pollsters Burson-Marsteller is out, reporting on 3500 interviews with Arabs 18-24 years of age in 16 countries.

Those of you who have read my recent book,
The New Arabs: How the Millennial Generation is Changing the Middle East

, won’t be surprised at the findings.

Arab youth think there is too much religion in public life. Only 29% actively disagree with this sentiment. This finding tracks with the findings I reported from Pew– that the Arab Millennials are generally somewhat less observant than their parents, and in the generation gap on this issue is particularly large in Tunisia and Lebanon. Interestingly, the youth of the conservative Gulf Cooperation Council countries (Kuwait, Bahrain, Qatar, UAE, Saudi Arabia and Oman) feel more strongly against religion in public life than do Levantines and North Africans (though in N. Africa twice as many people feel there is too much religion in public life as demur.)

The single biggest obstacle these youth see to a more successful Middle East is Daesh (ISIS, ISIL)! Indeed, nearly 4 in 5 said that they were concerned about its rise. Not only does the phony caliphate attract almost no support but 80% said they wouldn’t favor it even if it gave up its violence and gory spectacles. In accordance with this negative attitude toward Daesh, a plurality of the youth identified terrorism as the second biggest obstacle the region faces.

My book was widely and very positively reviewed. But one downside of coming out in July, 2014, three weeks after the fall of Mosul to Daesh, was that reviewers wanted to know why there was nothing about Daesh in it. But it was about secular-minded youth in Tunisia, Egypt and Libya and that was before Daesh got a toehold in Sirte and before some radicals in the Sinai franchised themselves as Daesh. The New York Review of Books actually put a picture of Daesh fighter on the page where my book was discussed. My book was about liberal and leftist youth in a different part of the Middle East.

I was upset. Because the Daesh narrative is a relatively minor phenomenon in the region and a flash in the pan, but the generation of young Arabs I studied has already done great things and is poised to do more, and it is relatively secular-minded.

In this survey, the youth are cynical about Daesh. The leading explanation they gave for its rise is unemployment.

They are worried about rising sectarianism. And, they are more concerned with stability than regular elections. Except in Egypt, they have a certain amount of buyers’ remorse for how their revolutions have turned out.

And they’re worried about youth unemployment. Less than half think good jobs are available to them in their area.

The youth see Saudi Arabia and the United States as their countries’ most important allies. Other allies are the United Arab Emirates, Qatar and France. France has come up in their esteem as an ally during the past year, displacing Kuwait from fifth place.

For Iraqi, Lebanese and Palestinian youth, Iran is seen as a major ally. This sentiment is regional– confined to the Fertile Crescent. In contrast, most other Arabs see Iran as an enemy.

The general sentiment that the US is an ally is not found in Iraq. Nine in ten Iraqi youth see the United States as an enemy.

Overwhelming majorities of youth want their national leaders to expand personal freedom and human rights for women. This sentiment is at 90% of respondents in Saudi Arabia.

So, not only are these youth dead set against Daesh but they have a feminist side.