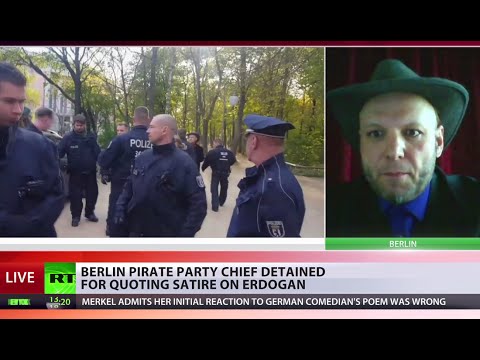 Bruno Kramm was arrested while protesting against a German law allowing the prosecution of citizens for insulting foreign leaders.

Bruno Kramm was arrested in his home country of Germany for “insulting a representative of a foreign state.” The offense is based on an archaic German law that allows foreign leaders to press charges against German citizens.

Police arrested Kramm in front of the Turkish Embassy in Berlin during a protest against the German government authorizing the prosecution of German comedian Jan Boehmermann, over a poem he recited on German TV targeting Erdogan.

The Pirate Party has been staging weekly protests against the “systematic terror of censorship, oppression, despotism and killings by the dictator Erdogan,” as well as the arrest of poet Boehmermann.

“When people slightly criticize the government in Turkey, they are persecuted, beaten or disappear. At the same time, the dictator Erdogan is allowed to significantly restrict the right of assembly and the freedom of expression in Germany, simply for saying that he beats Kurds and Christians,” Kramm wrote in a statement on the party website.

One of the lines from the criminalized poems suggests that Erdogan’s favorite activity is “minority oppression and castigation,” as well as a slew of other, sexually explicit accusations such as pedophilia and zoophilia.

Pirate Parties sprung into the political arena in Sweden in 2006. Now, over 60 nations have their own branch. While specific policies vary, they all defend the freedom of expression, communication, education, respect privacy, and promote the free flow of ideas, knowledge and culture.

Bramm has since been released from jail, but in the coming days he will have to return to a police location to answer for the charges against him.

RT: “‘They took me like a criminal’ – Head of Berlin Pirate Party arrested for quoting Erdogan satire”