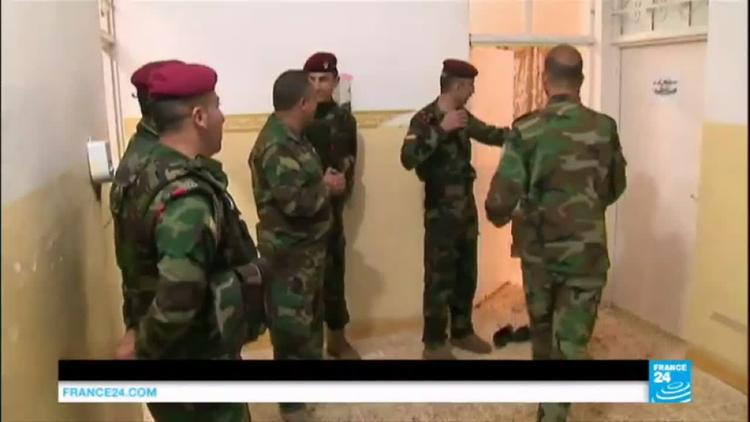 ISIS and pro-government forces both have records of harming civilians during and after military operations. The United States, Iran, Germany, and other states providing military support to Iraq should condition their support on scrupulous respect for the laws of war, which prohibit attacks that disproportionately harm civilians or fail to distinguish civilians and civilian objects from military objectives.

“Protecting civilians from needless harm needs to be paramount in any battle for control of Mosul,” said Joe Stork, deputy Middle East director. “It’s essential for the Iraq government to exercise effective command and control over all its forces, and for allies like the US and Iran to make sure they do so.”

Human Rights Watch has, since 2014, documented laws of war violations by the Iraqi military and the largely Shia militias that make up the Iraqi government’s Popular Mobilization Forces (PMF), and by Kurdish Peshmerga fighters fighting ISIS, including summary executions, disappearances, torture, use of child soldiers, widespread building demolition, indiscriminate attacks, and unlawful restrictions on the movement of people fleeing the fighting.

Human Rights Watch also called on ISIS forces to respect the laws of war, and in particular to allow civilians to leave areas under their control, not to use civilians to shield its military objectives from attack, and not to use child soldiers.

In mid-March 2016, the Iraqi army opened a ground offensive from the town of Makhmur, in Erbil governorate, toward Qayyara, 70 kilometers south of Mosul, but one month later, only a few nearby villages had been captured. The US-led coalition has conducted aerial attacks on ISIS and advises local forces on ground attacks. Germany leads a training center for Kurdish forces and provides them with weapons. Iran’s Islamic Revolutionary Guard Corps provides military advisors to Iraq.

With a political stand-off in Baghdad over the nomination of new government ministers, Human Rights Watch called on Iraq’s international supporters to use their leverage with political and military leaders in Iraq to ensure civilian protection and compliance with the laws of war.

Popular Mobilization Forces officials have said their forces would be at the forefront of the campaign against ISIS in Mosul, and the Peshmerga also vowed to participate. Speaking to Human Rights Watch in Baghdad in late March, Abu Mahdi al-Muhandis, the deputy head of the Popular Mobilization Commission overseeing the PMF, was clear that he expected his forces would participate in the battle for Mosul.

In late February 2016, Atheel al-Nujaifi, the former governor of Nineveh, who has his own militia, warned that local residents would rise up against the PMF if they participated. On April 11, Iraqi pollster Munqith Dagher presented results from one survey in which “of the 120 Sunni respondents in Mosul, 100 percent do not want to be liberated by Shiite militias or the Kurds.”

The Popular Mobilization Commission has increased its capacity to ensure compliance with the laws of war, its spokesperson Yusif al-Kilabi told Human Rights Watch in late March in Baghdad. Al-Kilabi said the commission set up a Directorate for Security and Discipline, with 20 staff lawyers providing training on the laws of war and 100 liaison officers who accompany PMF forces in the field.

Judge Abd al-Sattar Bir Qadar, spokesperson for the High Judicial Council, told Human Rights Watch that he had recently sent judges to process detainees the PMF had taken on the battlefield following the Jazira campaign in March. Bir Qadar added that the judiciary also held PMF members accountable under civilian law, with 300 PMF members charged or convicted of crimes and currently held in a new detention facility in Baghdad’s Kazhimiya neighborhood. Bir Qadar did not provide details of charges or convictions. Al-Kilabi said some PMF fighters had received 10 and 20-year sentences, but did not say what crimes they had been charged with.

Iraqi law contains no specific provisions for war crimes, crimes against humanity, or genocide, and Human Rights Watch urged Prime Minister Haider al-Abbadi to rectify this in a meeting in late March. Holding fighters accountable under the laws of war became even more important after the prime minister, on February 22, 2016, decided to transform the PMF into a permanent military institution with military ranks directly linked to the office of the commander in chief, who is the prime minister.

Kurdish Regional Government officials, in a March 26, 2016 letter to Human Rights Watch, said that Masoud Barzani, president of the autonomous Kurdish Region of Iraq, had issued Order No. 3 in March to Peshmerga fighters to observe principles of human rights and humanitarian law. The order stated that, “In all possible situations, civilians should be protected from any threat on their lives and properties, as well as the protection of their towns and villages which have been liberated by Peshmerga forces.”

“Training in the laws of war and orders to respect it are positive moves, but need to result in actual respect for the laws during conflict,” Stork said. “Given the record of abuses by armed actors on all sides, it is crucial for Iraq’s international allies to press the government to discipline and hold accountable fighters and commanders who violate the laws of war.”

Background on ISIS Violations of the Laws of War
ISIS has routinely carried out indiscriminate attacks on civilians, residents of Ramadi, Khalidiyya, ‘Amiriyat al-Fallujah, and Gwer, who lived through ISIS shelling of those areas, told Human Rights Watch, and probably has used other banned means of warfare. On March 8, 2016, in Taza Khurmatu, 20 kilometers south of Kirkuk, ISIS carried out a large-scale rocket and mortar attack with a chemical substance on a civilian area, killing three people and injuring more than 3,000, according to hospital documents that Human Rights Watch reviewed and accounts by victims and witnesses, including hospital workers. Hasan Tazali, a recently retired hospital worker, also told Human Rights Watch that on April 13, a Katyusha rocket landed very close to his house, which is in an entirely civilian area of Taza. The attacks came from Bashir, an ISIS-controlled town six kilometers southwest of Taza, residents said. Human Rights Watch reviewed the frontline with a Peshmerga commander a short distance south of Taza in December 2015, and the ISIS-held village of Bashir was the only ISIS-held village close to Taza.

ISIS also prevents civilians from fleeing. In Fallujah, ISIS executed people trying to flee in March 2016, a lawyer in Baghdad who had a first-hand account told Human Rights Watch. Several people fleeing the Hawija area, in Kirkuk governorate, said that ISIS has mined fields to prevent people leaving, and executed people caught trying to escape. A young man fleeing Atshana village in Kirkuk, in September 2015, said ISIS shot at his group as they made a dash for the Kurdish front lines. Human Rights Watch spoke with several people who said that ISIS is not allowing anyone, including civilians, to leave Mosul at present. A civilian from ISIS-controlled Ba’aj, a town 160 kilometers west of Mosul, told Human Rights Watch that he had to pretend his wife was sick to be allowed to leave in May 2015. He said ISIS burned the car of another family because they tried to flee the town, warning them they would be killed if they tried again.

ISIS forces, in August 2014, attacked the city of Sinjar and surrounding areas in Ninewa province inhabited by many from the Yezidi religious minority. ISIS enslaved more than a thousand Yezidi women and girls and executed many Yezidi men.

An Annex on Military Matters of the Islamic State, a manual for its commanders, lists among the necessary attributes of an Islamic State commander, that he “observ[e] the rulings of war in their entirety” without specifying the nature of ISIS’ understanding of those rules.

Background on Violations by Government Forces
The forces battling ISIS also have poor laws-of-war records, Human Rights Watch said. Some of the militias in the Popular Mobilization Forces (PMF), in September and October 2014, destroyed at least 30 villages around Amerli, 80 kilometers east of Tikrit, after lifting ISIS’s three-month siege on that Shia Turkmen town. In April 2015, during the government’s offensive against ISIS in Tikrit, Human Rights Watch warned against PMF forces wreaking similar abuses on the local Sunni population.

Despite an order by Prime Minister Abadi to arrest looters, Badr Brigades, Ali Akbar Brigades, Hizbullah Battalions, League of the Righteous forces, Khorasan Companies, and Soldier of the Imam militias, all within the Popular Mobilization Forces, in March and April 2015, leveled much of al-Dur, al-Bu ‘Ajil, and parts of Tikrit, after ISIS had withdrawn. Sunni PMF forces also carried out destruction in al-‘Alam.

Around Amerli, Human Rights Watch documented 11 abductions of Sunni residents by pro-government forces. After Shia militias participated in recapturing Tikrit, Human Rights Watch received credible information that they abducted at least 160 people, all of whom remain unaccounted for. After government forces retook Ramadi from ISIS in December 2015, two people told Human Rights Watch that, in March 2016, Hizbullah Brigades, League of the Righteous forces, and Soldier of the Imam militias were rounding up thousands of Sunni families fleeing the Jazira desert area west of Baiji, Tikrit, and Samarra and detaining them in food warehouses south of Tikrit. One source Human Rights Watch interviewed in March said he had just spoken to one militia member who said that he and fellow militiamen executed dozens of Sunni young men from the area west of Tikrit and Samarra.

According to Amnesty International, Peshmerga forces of the Kurdistan Regional Government destroyed Arab homes and villages after recapturing areas in Nineveh and Kirkuk governorates in 2014 and 2015, in violation of the laws of war.

Iraqi security forces, including the army and Popular Mobilization Forces, as well as Peshmerga forces, have imposed restrictions on Sunni Arabs fleeing ISIS, especially those trying to reach Baghdad and areas under Kurdish control. A member of the Iraqi parliament provided Human Rights Watch with a list of 200 Sunni Arab men from Anbar fleeing ISIS who he said were arrested by Popular Mobilization Forces during 2015, a large majority at the Razzaza checkpoint, some 40 kilometers south of Ramadi, in October, November, or December. A man who fled Ramadi in May 2015, told Human Rights Watch he had to pass 14 or 15 flying militia checkpoints on the road to Baghdad. This man, camped in makeshift shelter for displaced persons in Baghdad’s A’dhamiyya neighborhood, said fellow displaced people in the camp told him about numerous abductions of Sunni men from those same checkpoints.

Use of Child Soldiers
ISIS and the PMF use children in their ranks. A man who fled Ramadi in May 2015, when ISIS controlled the city, said ISIS recruited children as young as 7 through the mosque or by force: “Whoever had four sons had to give two to ISIS,” he said. “Whoever had three or two sons, had to give one.” In August 2015, Human Rights Watch interviewed two children who managed to flee an ISIS training camp for over 340 children in Tel Afar. They said teachers trained older children in religious studies and boys aged 14 and over in combat. In Syria, ISIS and other groups used children in combat.