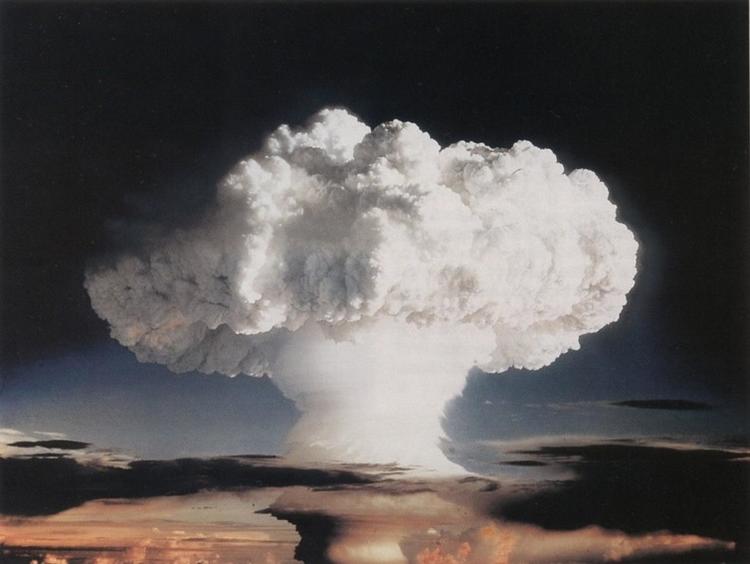 Donald Trump has once again violated all mainstream thinking to advance a dangerous and deviant policy, this time on nuclear weapons. The wannabe Republican presidential nominee recently said the US needs a policy of “unpredictability”. This means the US would be able to use nuclear weapons wherever, whenever, and against whomever it wants – no holds barred. He’s proposed using tactical nuclear strikes against Islamic State (IS), even if that means using nuclear weapons in Europe.

Criticism has come thick and fast against this “terrifying” proposal. He’s been called a “six-year-old with nuclear weapons” and “the single biggest threat to US security.” Hillary Clinton is now leading the attack, castigating Trump for one of “the most reckless statements on national security by any major presidential candidate in modern history”. It’s hard to disagree.

It’s true that unpredictability has long been part of nuclear policy. During the Cold War, nuclear leaders were keen to keep their options open (although China said it would never carry out a first strike). We’re lucky JFK’s first strike option wasn’t used during the Cuban Missile Crisis.

But the reason that option was never used is because there were other controls in place. Policies such as the Nuclear Non-Proliferation Treaty (NPT), which seeks to get rid of nuclear weapons altogether, kept the Cold War on ice. And anyway, unpredictability was largely defensive. It was a last resort.

This principle is still at work in nuclear weapons policy today. While President Barack Obama’s 2010 Nuclear Posture Review allows for a first strike, this is about defending the US only in a worst-case scenario. Even in the heyday of the War on Terror, the notoriously gung-ho Bush, Cheney and Rumsfeld weren’t anywhere near as aggressive as Trump. Trump said he would have used nuclear weapons after 9/11.

Trump’s impulsive embrace of unpredictability ignores the prospect that this would destroy the NPT – an agreement some think is the only thing that stands between the world and nuclear war.

Trump also doesn’t seem to realise (or care) that the Cold War is over. The threats he’s discussing have nothing in common with the old Eastern Bloc, and it’s widely accepted that nuclear weapons just aren’t applicable to the fight against enemies such as IS. For one, who do you attack? Terrorists often don’t have fixed addresses. Yes, IS has its besieged caliphate, but even this isn’t a clear enough target for a nuclear attack, not least given the scores of Syrian and Iraqi civilians who’d be slaughtered in the process.

Even if a President Trump never acted on this absurd threat, he could do untold damage to the global order just by issuing it. We have avoided nuclear conflict mainly thanks to commitments that no-one will use nukes. Trump’s plan would encourage nuclear conflict, cause even more states to build these weapons, and undermine the diplomacy that currently keeps the nukes in check.

And while it may be getting less certain that Trump will win the Republican nomination, let alone the presidency, he can’t throw threats like this around without serious consequences.

Trump says he will use nuclear weapons to win respect from Muslim communities, bolstered by waterboarding and spying on mosques. Even coming off his history of inflammatory comments in this vein, including his shocking proposal to ban all Muslims from travelling to the US, this is a new low, and it’s highly damaging to the US’s relations with Muslim audiences everywhere.

Even many in Trump’s own party seem to be on the side of common sense, and the GOP’s national security leadership has released an open letter condemning Trump’s policy towards Muslims. But for all of the #nevertrump movement’s efforts to defeat him, the extremism of his statements may well already be encouraging extremism in turn – and could even start to upset the world’s fragile nuclear balance.

If you threaten someone with nuclear weapons, sincerely or otherwise, it’s not unlikely they’ll build more weapons of their own and prepare to attack you back. As North Korea’s exploits indicate, this a risk even when a rogue state perceives a threat, never mind when one is explicitly made.

So Trump’s words alone will cause instability and mistrust within the international system, even if he never gets anywhere near the nuclear codes. Obama is right to say Trump evidently doesn’t understand nuclear policy in the slightest; he’s hiding behind antediluvian policies that were meant to protect the US, but which will actually encourage nuclear war in his hands.

Of course, some on the right have defended him. They are wrong. Even as a candidate, Trump poses a significant danger to global security.