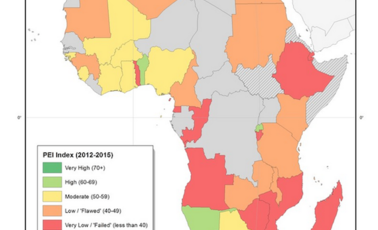 Africans recently went to the polls in Benin, Cape Verde, the Republic of Congo, Niger and Zanzibar.

The outcome was decidedly mixed.

These mixed results deserve our attention because elections are a barometer of how well a democracy is functioning. The Electoral Integrity Project (EIP), which I direct, was founded four years ago to provide an independent evaluation of the quality of elections worldwide. The EIP’s results have been published in several books, including my own, Why Elections Fail.

The results of this year’s survey provide new and sometimes surprising insights into the failure – or success – of elections, especially in Africa, where democracy has a shallow history and its future is often in doubt.

Many ways to fail

Rigged elections are important because they can reinforce the legitimacy of corrupt and repressive leaders and solidify their hold on power.

March’s elections were not the worst recent ones on the African continent, by any means. Even more deeply flawed elections have been recently held in Ethiopia, Mozambique and Burundi.

In Burundi, for example, President Pierre Nkurunziza’s decision to run for a third term sparked civil unrest, a failed coup and conflict that threatened to ignite civil war. Contentious elections in each of these states threaten fragile prospects for stable democratic governance in Africa.

Yet some contests in Africa provide room for hope. For example, in Cape Verde’s parliamentary elections, also on March 20, the ruling party was defeated, the campaign saw little conflict and the opposition came to power after 15 years.

Nor are these cases unique. Previous African elections which also worked relatively well, according to international observers and experts, have been held in Mauritius, South Africa, Lesotho and Namibia.

Many factors contribute to these contrasts among African elections. These include a history of war and violence, the curse of having natural resources, constitutional designs, ethnic divisions and regional neighbors.

But is poverty an important part of the answer?

Ever since sociologist Seymour Martin Lipset’s classic 1959 article titled “Some Social Requisites of Democracy: Economic Development and Political Legitimacy,” scholars have puzzled over the links between democracy and development.

The so-called “Lipset thesis” argues that democracies and, by extension, electoral integrity flourish best in industrialized and postindustrial societies with widespread literacy and education, an affluent professional middle class and a pluralistic range of civic associations serving as a buffer between citizens and the state.

The original claim by Lipset specified most simply that:

The more well-to-do a nation, the greater the chances that it will sustain democracy.

This claim has been debated for more than a half-century. Many studies confirm the original correlation. Others suggest cases disputing the pattern.

For example, Singapore is one of the richest countries in the world, yet it has been ruled by Lee Kuan Yew’s People’s Action Party since 1959. At the same time, several low- to middle-income African countries such as Lesotho, Cape Verde, Botswana and Benin have solid democratic ratings, according to Freedom House, for more than two decades. Contests in Nigeria last year also provide hope for progress. India is also cited as an important outlier.

One of the most influential arguments about wealth and democracy was advanced by political scientists Adam Przeworski and Fernando Limongi in their influential 1997 article “Modernization: Theories and Facts.” This study compared 135 autocratic and democratic regime states from 1950-1990.

The authors argued that dictatorships collapsed for all sorts of reasons. When this happens, achievement of a certain threshold of development – equal to about $8,000 per person a year in 2005 prices or equivalent currencies – protects new democracies from backsliding. Below this level of development, however, countries that experienced regime transitions had little chance of sustained democratic stability.

In this view, poor African societies may experience a regime transition from autocracy to the establishment of democratic constitutions and multiparty elections, but only for a short period. Their odds of flourishing remain slim.

If development is the root cause of the problem, then electoral malpractices such as coercion, vote-buying and fraud can be expected to be particularly severe in the poorest societies in Africa. But are they? This is where the EIP provides insights.

The 2015 EIP annual report compares the risks of flawed and failed elections, and how far countries around the world meet international standards. It gathers assessments from over 2,000 experts to evaluate the integrity of all 180 national parliamentary and presidential contests held between July 1, 2012 and December 31, 2015 in 139 countries worldwide, and it generates an overall 100-point Perceptions of Electoral Integrity (PEI) index. Contests are further classified into flawed contests (those scoring 40-49 on the 100-point scale) and failed elections (those scoring less than 40).

To summarize the evidence in the region, Figure 1 maps the contrasts in the overall 100-point PEI index for all the African countries covered in the survey since 2012.

Unfortunately, more than half the African states included in the survey have flawed contests (with low scores for integrity), with Burundi, Equatorial Guinea and Ethiopia rated as failed elections – and some of the lowest ratings for integrity in any country around the globe.

But is development the key?

Figure 2 illustrates the links between economic development (per capita GDP in purchasing power parity, with data from the World Bank) and the electoral integrity (measured by PEI experts).

As the figure shows, within Africa, there is little evidence that wealth and poverty are correlated with levels of electoral integrity. Thus, failed contests include oil-rich Equatorial Guinea, along with poor Burundi, Ethiopia and Djibouti. Similarly, the flawed category includes elections in moderate-income Algeria as well as low-income Mauritania and Malawi, while the high-integrity contests include both low-income Benin and the more prosperous Mauritius.

Of course, the evidence within Africa provides a limited test of both the Lipset thesis and the Limogi and Przeworski argument, because nearly all states fall into the less developed category. A broader comparison of elections across the whole world suggests a positive link between economic development and the quality of elections.

Affluent Norway, Switzerland and the Netherlands have high-quality elections, according to experts, while low-income Haiti, Ethiopia and Cambodia score poorly, with just a few outliers, like Kuwait and Singapore.

What is to be done?

And that’s not all. As shown in my book, Why Electoral Integrity Matters, malpractices have important consequences by deepening public mistrust of electoral authorities, political parties and parliaments, which, in turn, depresses voter turnout and catalyzes protest activism.

Rather than abandoning support for elections in the face of these challenges, the international community needs to double down on its investment.

According to AidData, roughly half a million U.S. dollars of official developmental assistance are spent annually on providing electoral assistance worldwide. While many African elections are indeed deeply flawed today, the EIP evidence suggests that poverty is not an insurmountable barrier to elections with integrity.