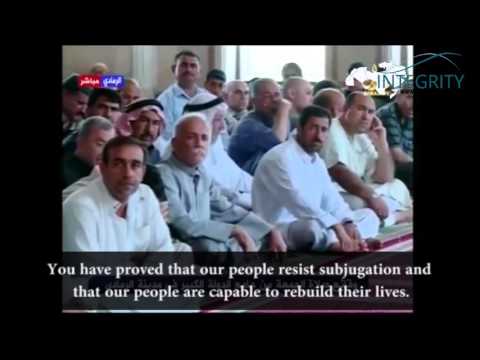 Leading Sunni Muslim politicians have opened an office in Washington to represent Sunni interests. There’s talk of an autonomous Sunni region again as a result. But other Sunni MPs say its all nonsense.

In Dhuluiya victims of the IS group demanded that families associated with IS fighters leave the area.

On Iraqi social media, one often sees slogans such as “We Want A Sunni region” or read about people discussing the “Sunni region” as if it already exists. Some locals are even saying that the fact that senior Sunni Muslim politicians have opened an office to represent Sunni Muslim interests in Washington is a preparation for the Sunni region-to-be.

And there are other indications that the country’s Sunnis are planning a region of their own. A paper presented by the largest Sunni Islamist political party in the country, the Iraqi Islamic Party, acknowledges the rights of Iraq’s Sunnis to form their own region – as long as it is all done within the country’s constitutional and legal framework, the paper said.

The party’s paper also said that the party supported national reconciliation and reform, as long as there is clear plan for this and that it’s not subject to too many delays and compromises.

Another signal was given by senior Sunni politicians, Atheel al-Nujaifi, the former governor of the Ninawa province, and Rafi al-Issawi, the country’s former Minister of Finance.

In a statement al-Nujaifi confirmed that the Sunni politicians were setting up a body to represent Iraq’s Sunni interests in Washington.

“It was created to convey the suffering and oppression of Sunnis in Iraq to the international community,” al-Nujaifi’s statement said, before adding that, contrary to popular rumour, the US has not made military bases in any would-be Sunni Muslim region a condition of their support for any such project.

However despite the grandiose claims, the idea doesn’t have any support on the ground, another Sunni politician, Zuhair al-Chalabi, the former head of Mosul’s reconstruction committee, told NIQASH.

“The land that is being talked about is actually occupied by the Islamic State group right now,” al-Chalabi said. “Those who are calling for a Sunni region are just being stubborn. This idea is motivated by political interests and it’s not coming from Sunni leaders who have true popular support.”

Although the idea has become more popular since the security crisis sparked by the extremist Islamic State, or IS, group, it isn’t practical on either a political or economic level, al-Chalabi added.

“Turning the country into regions based on ethnic or sectarian lines will divide the country and put Iraqi identity back thousands of years,” argues Hani Ibrahim Ashur, a local political consultant. “The politicians think they will be able to expand their interest in the whole region and that’s why they like the idea,” he says dismissively.

The Iraqiya bloc, which used to be the largest opposition bloc in the country, has always been against the creation of regions like this, says Karima al-Jiwari, an Iraqiya MP.

“Anyone who wants to divide Iraq is not an Iraqi,” al-Jiwari says. “Anyone who promotes the idea of division is being paid to do so. The worst thing is that it is the weakness of the government that’s taking Iraq to these lows.”

“Some morally bankrupt politicians are promoting the idea of creating regions along sectarian lines and this is very dangerous,” argues Abbas al-Bayati, a Turkmen MP, who is also a member of the Committee on Foreign Relations in the Iraqi Parliament. “It’s dangerous because there are different kinds of Iraqis in all the different areas.”

Al-Bayati believes the placement of any Sunni Muslim region would also be wrong – most people talk about centring it in Mosul without even considering the Anbar province. Additionally if a Sunni region was created, it would just become the next pawn in the Middle East’s wider, ongoing Sunni-versus-Shiite conflict.

Some locals, including al-Bayati, also suspect that the US is keen on the idea of a Sunni Muslim region in Iraq. Local political consultant, Amir al-Saadi, agrees, saying that “the US continues to support this project”.

However al-Saadi isn’t sure it’s really the best idea. “If the Sunni people are to rely on the resources in the region they would have, this would not improve the conditions of their lives. Additionally, looking at the Kurdish experience in Iraq, with the political crises and the economic crisis, and you have the best proof of the difficulty in creating a new region inside Iraq.”