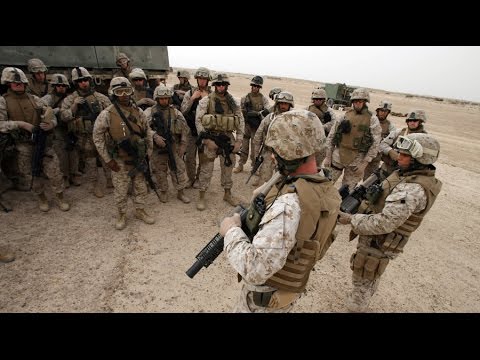 Recently US troops started fighting the [so-called] Islamic State in Iraq [ISIL], with ‘boots on the ground’. But is keeping a distance between the US and some old Shiite enemies hampering the fight? Or is it just good tactics?

Iraqis found out that just about a week ago at dawn, the US military had entered the “war” against the extremist group known as [IS or ISIL], for real. In the northern province of Ninawa, near the extremist-held city of Mosul, US ground troops – a group of 200 soldiers from the 26th Marine Expeditionary Unit, according to the US Secretary of Defence, Ashton Carter – used their artillery against . . . IS, group’s fighters in the area.

Speaking at a press briefing last Friday, Carter told reporters that the US troops had set up base at an outpost to be named Firebase Bell – as the LA Times newspaper reported, “this would be the first American combat base since the US returned to Iraq in 2014”.

So how did Iraqis feel about the apparent return of US boots to their ground?

“Hezbollah in Iraq: We will fight the US troops the same way we did years ago.”

“The US troops have finally decided to join in properly,” says Qais al-Saadi, a colonel in the Iraqi army. “Previously they were limited to air raids. I think now they have discovered that these air raids did not affect [ISIL] as much as they hoped and they have become convinced that ground troops are also important.”

Al-Saadi was happy about this, noting that the US was paving the way for the Iraqi army, especially with their recent success in eliminating two senior members of the IS group in quick succession.

Social media lit up with debate on the subject. Some welcomed the US troops, believing they were necessary in order to defeat the IS group. Often Iraqi commentators said that this move by the US was too late and that they should have helped from the beginning. Others were not so happy, saying it was a new occupation.

In other parts of the Iraqi political spectrum reactions were equally mixed. As one might expect, Sunni Muslim parties and Iraqi Kurdish parties – both of whom have long been supported by, and have supported, the US in Iraq – welcomed the new phase of engagement. An alliance of Sunni Muslim parties said they welcomed the US’ participation. In fact, back in 2014 when the IS group first caused the security crisis in Iraq, representatives of both Sunni Muslim and Iraqi Kurdish parties asked the US for help.

And as one might also expect, the most antipathy was expressed by Shiite Muslim groups, and in particular, some of the Shiite Muslim volunteer militias with strong ties to Iran.

Just hours after Carter’s announcement about Marines in northern Iraq, the leaders of several of the most powerful of these often-controversial Shiite Muslim militias expressed their anger.

A statement from the League of the Righteous militia, one of the most extreme and feared of the groups, said that its fighters would treat the US soldiers as though they were an occupying force. They believe that Washington is using the IS group as an excuse to return to Iraq. And they called upon other Shiite Muslim militias to prepare to fight the US too.

The Harakat al-Nujaba militia made similar threats, saying that, “we are going to make them remember the defeat they suffered here previously”.

“The Marines are actually here to protect the Islamic State,” a statement from Hezbollah in Iraq, which is led by Abu Mahdi al-Mohandes, generally regarded as the leader of this sector of militias. “We will fight them the same way we did years ago.”

“It seems clear the US has deliberately chosen to keep out of the way of Shiite Muslim militias. Still the two groups may meet, especially in Ninawa.”

He is echoing what some Iraqis actually believe: that the US is in Iraq to help the IS group. This belief is based on all kinds of rumours and gossip, which says that, for instance, the US had dropped supplies to the IS group. The Iraqi government and US government have both denied this and the rumours have been disproven. However many supporters of the Shiite Muslim militias still believe this gossip and their leaders often repeat the fallacy.

All of the latter militias are known as being strongly connected to Iran.

The US Marines are based near the Makhmour military base, which was built to house Iraqi army troops as they prepare for an assault on Mosul, the IS group’s “capital” in Iraq. The base is south of the Iraqi Kurdish city of Erbil and near the eastern borders of Ninawa province.

Shiite Muslim militias are based in the Baiji area, out of which they pushed the IS group in November last year. Baiji is close to the southern borders of Ninawa province.

The distance between the two sets of fighting forces is around 130 kilometres. “The reason that the Shiite Muslim militias haven’t gone any further toward Mosul is political rather than military,” Abu Zainab al-Talibawi, originally from Basra and one of the leaders of the militias based in Baiji, told NIQASH in a telephone interview. “Months ago the militias prepared to liberate Sharqat, south of Mosul. But some Iraqi politicians as well as the US forces, do not want us to battle for Mosul,” al-Talibawi explained. “Sharqat is really the last barrier between our militias and the US base in Makhmour. So US air raids haven’t been targeting the IS group in Sharqat because the US needs that city to be controlled by the IS [to keep the two forces separate] – but this also prevents our militias from reaching Mosul.”

In February the Ninawa provincial council voted against allowing the Shiite Muslim militias to fight for Mosul. The council said local forces must be involved in this battle.

The same sort of scenario seems to be playing out further south, in Anbar, the other province where both US troops and Shiite Muslim militias are present.

The US troops are in the Ain al-Asad military base, just outside of a village called Khan al-Baghdadi. Meanwhile Shiite Muslim militias’ fighters have been on the outskirts of the city of Fallujah for several months. Once again the distance between the two forces is over 100 kilometres.

“The US won’t allow us to liberate Fallujah,” says Hassan Salem, an MP for the political bloc that represents the interests of the League of the Righteous in Iraq’s Parliament. “If Washington was serious about fighting the IS group it would go and fight in Fallujah. It’s closer to Baghdad than Mosul.”

It seems clear that the US has deliberately chosen bases to keep out of the way of the Shiite Muslim militias. Nonetheless the two groups may still meet at some stage, especially in Ninawa.

Despite widespread opposition, the leaders of Shiite forces insist that they will take part in the battle for Mosul. In particular they want a piece of the action in the area of Tal Afar, west of Mosul. The town is home mostly to the ethnic Turkmen group but this group is split between Sunni and Shiite Muslims. A few months ago, the Shiite Muslim militias established a new brigade made up of displaced Shiites from Tal Afar, who want to return there to fight the IS group that pushed them out of their homes.

As for the Iraqi government, it hasn’t been able to do much about the allergic reactions that the Shiite Muslim militias have had to the increasing US presence.

The government, led by Haider al-Abadi, has tried to rein the militias in by making them an official part of the Iraqi military apparatus. In February 2016, al-Abadi tried to replace militia leader, Abu Mahdi al-Mohandes, with the former federal police chief, Mohsen al-Kaabi, in an attempt to gain more control over the militias. However the attempt was rejected by the militia leadership.

“The militias are ideological factions that have different kinds of administration and organization from the classical model that the military follows,” an official statement from the Hezbollah in Iraq militia said. “Leading these factions requires expertise in non – traditional warfare, characterized by rapid mobility, manoeuvrability and the ability to immediately change battle plans.” Of course, the militia also threatened the government if they tried to replace their boss.

And so the problem remains. The fight against the IS group cannot be won by any one group. The volunteer militias cannot do it, despite their protestations to the contrary, the Iraqi army can’t do it and most likely, even if everyone did come together, they wouldn’t succeed without the help of the US military.