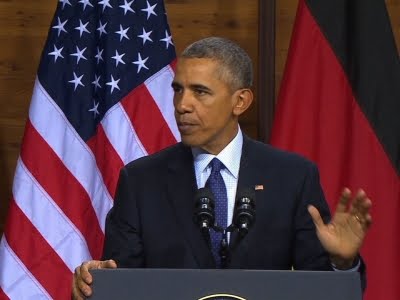 On June 29, 2014, when Abu Bakr al-Baghdadi gave a speech from the Great Mosque of al-Nuri in Mosul, Iraq, announcing the formation of an Islamic caliphate, the newly proclaimed [so-called] "Islamic State" did indeed have many of the hallmarks of an actual state.

It had borders, patrolled by its agents. It had a military, special-forces units, police, an intelligence apparatus, a press office, tax collectors, engineers, a stratified leadership, and both foreign and domestic policies. Unlike its predecessors Al-Qaeda and Al-Qaeda in Iraq, which had only been able to establish a state of mind among their followers, Baghdadi's organization had managed to capture and rule actual territory, not just individual cities or neighborhoods.

That is no longer the status quo. If an observer were giving a State Of The So-Called Islamic State speech, one would have to acknowledge that the "state" is weak. The United States estimates that Kurdish forces and the Iraqi military have taken back 40 percent of the territory held by Islamic State (IS). An unnamed U.S. defense official recently told USA Today that IS oil revenues had been cut by 50 percent. U.S. Major General Peter Gersten said that a series of coalition air strikes have destroyed as much as $800 million in cash that IS was hiding in various safe houses and hidden stockpiles, and that there had been a 90 percent increase in IS defections.

Gersten also said that there has been a massive drop in the flow of foreign fighters to IS, from a high of about 2,000 per month just a year ago to about 200. If true, it is now likely that the U.S.-backed coalition is killing IS extremists faster than foreign fighters can join the organization's ranks.

To make matters worse for IS, many of the militant group's top leaders have been killed by coalition air strikes. In March, a strike killed Abd al-Rahman Mustafa al-Qaduli, IS's "top financier." Earlier that month, another air strike killed Umar al-Shishani, or "Omar the Chechen," the "minister of war" for IS.

A slew of less infamous IS leaders has also been killed, including the IS-appointed "governor" of the Al-Hamadaniya district of Iraq, Barzan al-Husam, and many other field commanders. While the big names make the headlines, the killing of local governors and military commanders and the strikes that hit IS in the pocketbook may have a more tangible impact on disrupting local governance, and thus shaking the perception that IS is indeed a state rather than just a terrorist insurgency.

However, for all the military defeats IS has suffered, it is far from dead — and a number of challenges for the United States remain.

The United States has had a military presence in one form or another in Syria for months. While U.S. soldiers have been in Syria since late last year, working with coalition members on the ground to "tighten the squeeze" on IS and establishing a headquarters at the Rmeilan air base in northern Syria, it appears that this mission may be expanding. U.S. President Barack Obama has announced that the United States will deploy 250 Special Forces soldiers to Syria.

One key challenge is that the United States does not have adequate intelligence on the ground to effectively target its air strikes. According to recent statements by U.S. Central Command's (CENTCOM) Colonel Pat Ryder, the anti-IS coalition has flown 91,000 sorties and conducted 12,000 air strikes — that sounds like a lot until you realize that only about 13 percent of coalition sorties end in air strikes. As IS shrinks on the battlefield, it will only become more difficult to find, identify, and destroy targets from the air.

IS's leaders have also adopted a simple-yet-sinister plan to block U.S. air strikes — militants are reportedly covering the roads of cities they occupy with canvas roofs. An activist news agency covering the IS occupation of Raqqah, its so-called capital, has posted pictures of these canvas awnings, which make it impossible for coalition drones or jets to follow the movement of IS fighters below.

It could become very difficult, then, to differentiate the terrorists from the civilians that they are terrorizing. Worse, if this strategy works we can expect to see it copied in other locations IS controls, a move that could prove to be far more effective at stopping U.S. air strikes than even the most advanced antiaircraft weapons. IS may be hemorrhaging money, but tarps are a lot cheaper than guns.

To help defeat IS, the United States may be attempting to refine its tactics and address a sectarian dynamic that is working against Washington.

Last week, pro-IS social-media accounts tweeted pictures they say show that U.S. fighter jets and A-10 Warthogs have been supporting the rebels fighting Syrian President Bashar al-Assad’s regime who have been locked in heavy battle with IS for months but are currently backed up against the Turkish border.

Earlier in the year, a coalition of Iranian Islamic Revolutionary Guards Corps (IRGC) troops, Hizballah fighters, and Iraqi Shi’ite militias fought side by side with the Syrian military to break the battle lines of the anti-Assad rebels who have held northern Syria for years. IS took full advantage of this situation and launched its own offensive, capturing large amounts of territory as its fighters pushed west from their strongholds and north toward the Turkish border. Kurdish People’s Protection Units (YPG) fighters to the west also launched an offensive against the struggling anti-Assad rebels, and a small group of those rebels are now trapped.

The rebels in the area east of Azaz had been making gains against IS in early April, but by the middle of the month that progress had now been reversed. While it’s dangerous to ever take the word of jihadist propaganda as truth, the presence of the A-10 in this area would suggest that the United States is providing close air support for the anti-Assad rebels as they push back against IS — a level of coordination between the United States and local ground forces typically reserved for Iraq or eastern Syria.

If the United States is conducting air strikes against IS, and in support of anti-Assad rebels, it may be an attempt to protect the Turkish border and reassure a frustrated NATO ally. However, IS is still making gains. On April 27, there were reports that IS had captured five rebel-held villages, including Dudyan, west of Al-Rai and right on the Turkish border. IS is now close to closing off and destroying the anti-Assad rebels who are defending their most important border crossing — and the only one they still control in northern Aleppo.

IS, even more so than Al-Qaeda before it, which survived 15 years of the war on terror, has proven its ability to constantly adapt to both its victories and its defeats. Despite military victories against IS over the last 20 months, even the commanders of the U.S. coalition admit that there are new challenges ahead. IS is currently exploiting the military weakness of one of its principal enemies, the anti-Assad rebels, and it is digging in to its positions in both Syria and Iraq.

The next phase of this fight is far less straightforward, and IS clearly knows that the storm is coming and is preparing accordingly — with new offensives and canvas tarps.

AP: “Obama: New US Troops in Syria Will Be Essential”