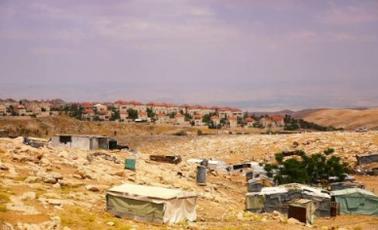 Fahwad Al-Khadoumi (nsnbc) : Lance Bartholomeusz, Director of UNRWA Operations in the West Bank condemned Israel’s latest round of large scale demolitions of homes in the Palestinian Bedouin refugee community Um al-Khair in the occupied Palestinian West Bank. Israel uses parts of the Negev desert for testing weapons with nuclear material and to dispose of nuclear waste from its not-IAEA monitored Dimona nuclear facility. 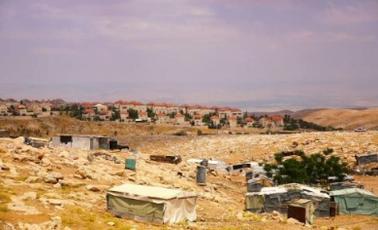 The director of the United Nations Relief and Work Agency (UNRWA) for Palestine’s Israeli-occupied West Bank issued a press release, stressing that the UNRWA condemns the latest round of demolitions of Bedouin’s homes in Um al-Khair, in the South Hebron Hills.

As a result of Israeli authorities home demolitions, 31 Palestinian refugees including 16 children were made homeless, stated Bartholomeusz. He added that this community has endured several rounds of home demolitions and stressed that residents often faced harassment from residents of the nearby, illegal Karmel settlement. The UNRWA West Bank director voiced his indignation and the UNRWA’s protest, saying:

“I am appalled. Looking in the eyes of a young Bedouin boy in a red shirt standing amongst the crumpled ruins of his demolished home, how can anyone justify this?

Some 700 Palestinians have been affected by home demolitions since January 2016, a number that approaches the total of affected people in 2015. Bartholomeusz added that the UNRWA is gravely concerned about demolitions in violation of international law. The Fourth Geneva Convention prohibits the destruction of private property and obliges Israel, as occupying power to administer the occupied territory for the welfare of the protected Palestinian population.

The UNRWA already urged the international community in 2014 to stand against the forced transfer of Palestinian Bedouins. In 2015 the Israeli parliament (Knesst) adopted a bill that threatens 40,000 Palestinian Bedouins from the Negev desert with being displaced. The targeting of Bedouin communities happens within two primary contexts.

For one, Israel’s continued, de facto annexation of Palestinian territories and settlement expansion. For the other, the use of Bedouin land, especially in the Negev, for military exercises and in part to place nuclear waste from Israel’s non-IAEA monitored nuclear facility in Dimona.

Reports from June 2015 strongly suggest that Israel tested bombs with nuclear material in the Negev desert. Within this context it is particularly noteworthy that the high cancer rates among Palestinian prisoners may be attributed to nuclear toxic waste which Israel buries near several prisons in the Negev desert.