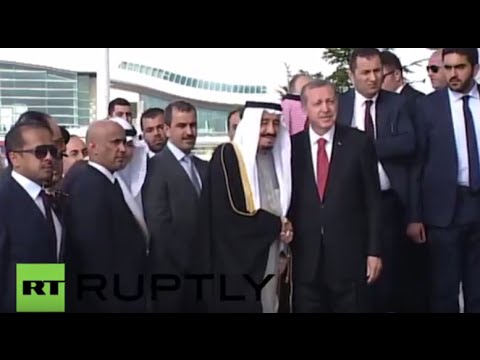 Saudi Arabia’s King Salman is visiting Turkey today, after his trip to Egypt this past weekend (I wrote about that at The Nation).

There are things that have driven Saudi Arabia and Turkey apart, and things that have brought them together again. The tensions center on the Egyptian officer corp’s overthrow of the Muslim Brotherhood government of Mohammed Morsi in summer of 2013.

Turkish president Tayyip Erdogan is a big supporter of the Muslim Brotherhood, and his pro-Muslim Justice and Development Party struggled against Turkey’s own nationalist officer corps, which had regularly made coups against democratically elected governments in the second half of the twentieth century. He has demanded that Morsi be released and that the death sentence hanging over his head be commuted.

In contrast, Saudi Arabia strongly supported the overthrow of Morsi, and likely encouraged the Egyptian officers to crush the Muslim Brotherhood, which Riyadh views as populist and dangerous to regional stability (even blaming al-Qaeda on the Brotherhood).

The animus against the Brotherhood, however, was mainly carried by the late King Abdullah. His successor in Riyadh, King Salman, is said to have moderated this Saudi anti-Brotherhood stance. Salman needs the (Sunni) Brotherhood in Yemen, for instance, against the Zaidi Shiite group, the Houthis, against whom the Saudis are fighting a brutal air war. Turkey has given verbal and perhaps some logistical support to the Saudi struggle in Yemen against the Houthis, and Erdogan has denounced Iranian support for the Houthis. (Typically outsiders over-estimate the significance of Iranian support for the Houthis, who are a local Yemen force and who probably have not in fact gotten that much aid from Iran). Iran has been upset by the charges, but has striven to maintain good trade and diplomatic relations with Turkey.

Moreover, many of the remnants of the Free Syrian Army fighting to overthrow Bashar al-Assad are actually Muslim Brotherhood, and are allied with the more hard line fundamentalist Salafi groups that Salman supports. That is, King Salman appears to be more afraid of Iran than he is of the populist movements that overthrew dictators in the region, whereas with his predecessor the emphases were reversed.

Syria is what Saudi Arabia and Turkey most have in common at the moment. Both want to overthrow the regime of Bashar al-Assad. Erdogan had tried to cultivate good relations with Bashar and even used to vacation with him, but al-Assad’s massacre of small town and rural Sunni fundamentalists was unacceptable to Erdogan (they resemble his own constituency in Turkey).

But while Saudi Arabia under Salman views Iran as a full-blown enemy and stirrer of instability in the region, Turkey has correct relations with Iran, despite tensions over Syria and Yemen. Turkey does $10 bn a year in trade with Iran and is aiming for $30 bn. Turkey does about $9 bn. in trade with Saudi Arabia annually. So economically, the two countries are equally valuable to Turkey and Iran even has a slight edge.

Turkey and Saudi Arabia have likely lost the Syrian Civil War, now that the Russian Federation has intervened. They will want, however, to get the best settlement possible. They want their clients, the fundamentalist militias fighting against the regime, to have a place at the peace negotiations and in the resulting government. They want al-Assad gone. And they want to reduce Iranian influence in Syria. These considerations account for warming ties between the two.