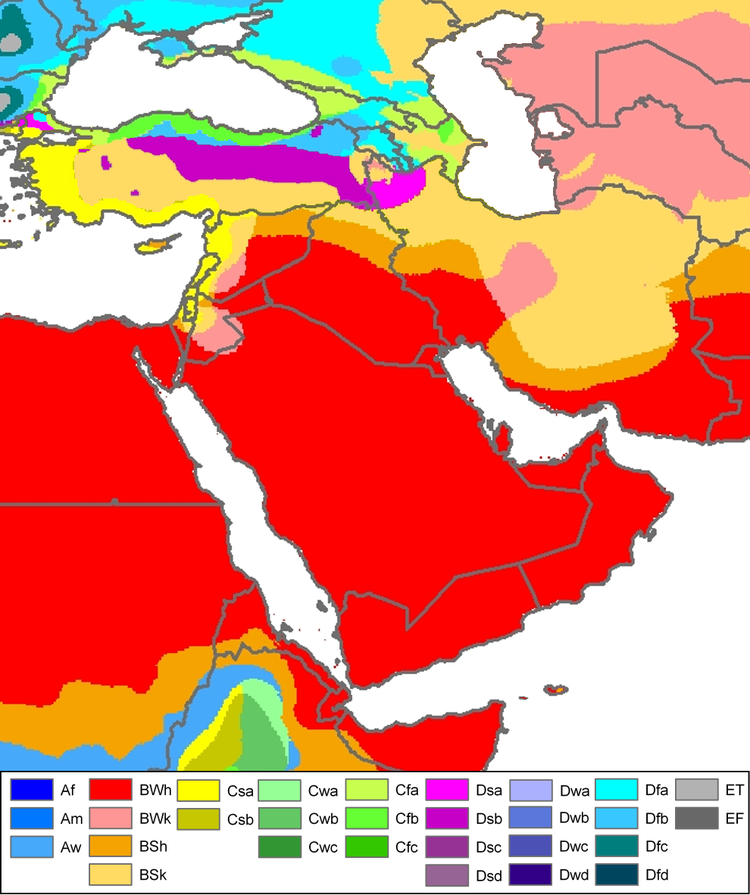 CAIRO (IPS) – This is not about any alarming header—it is the dramatic conclusion of several scientific studies about the on-going climate change impact on the Middle East region, particularly in the Gulf area. The examples are stark.

“Within this century, parts of the Persian Gulf region could be hit with unprecedented events of deadly heat as a result of climate change, according to a study of high-resolution climate models,” a recent Massachusetts Institute of Technology (MIT) research warned.

The research–titled “Persian Gulf could experience deadly heat”, reveals details of a business-as-usual scenario for greenhouse gas emissions, but also shows that curbing emissions could forestall these “deadly temperature extremes.”

The study, which was published in detail ahead of the Paris climate summit in the journal Nature Climate Change, was conducted by Elfatih Eltahir, a professor of civil and environmental engineering at MIT, and Jeremy Pal PhD ’01 at Loyola Marymount University.

The authors conclude that conditions in the Persian Gulf region, including its shallow water and intense sun, make it “a specific regional hotspot where climate change, in absence of significant mitigation, is likely to severely impact human habitability in the future.”

Running high-resolution versions of standard climate models, Eltahir and Pal found that many major cities in the region could exceed a tipping point for human survival, even in shaded and well-ventilated spaces. Eltahir says this threshold “has, as far as we know … never been reported for any location on Earth.”

MIT, which was founded in 1861 with the stated mission to advance knowledge and educate students in science, technology, and other areas of scholarship that will best serve the nation and the world in the 21st century, alerts that “detailed climate simulation shows a threshold of survivability could be crossed without mitigation measures.”

The research, which was supported by the Kuwait Foundation for the Advancement of Science, reveals that the tipping point involves a measurement called the “wet-bulb temperature” that combines temperature and humidity, reflecting conditions the human body could maintain without artificial cooling, the say.

That threshold for survival for more than six unprotected hours is 35 degrees Celsius, or about 95 degrees Fahrenheit, according to the recently published research.

The severe danger to human health and life occurs when such temperatures are sustained for several hours, Eltahir says — which the models show would occur several times in a 30-year period toward the end of the century under the business-as-usual scenario used as a benchmark by the Intergovernmental Panel on Climate Change.

An Even Hotter and Drier Middle East

For its part, the IPCC – Intergovernmental Panel on Climate Change latest assessment warns that the climate is predicted to become even hotter and drier in most of the Middle East and North of Africa (MENA) region.

Higher temperatures and reduced precipitation will increase the occurrence of droughts, an effect that is already materializing in the Maghreb,” says the World Bank while citing the IPCC assessment.

A scene in the high desert right outside of Marrakech, Morocco. A shepherd is guiding his sheep through the landscape in search of vegetation. | Credit: Johntarantino1 | Creative Commons Attribution-Share Alike 3.0 Unported license. | Wikimedia Commons

“It is further estimated that an additional 80–100 million people will be exposed by 2025 to water stress, which is likely to result in increased pressure on groundwater resources, which are currently being extracted in most areas beyond the aquifers’ recharge potential.”

“It is one of the world’s most water-scarce and dry regions; with a high dependency on climate-sensitive agriculture and a large share of its population and economic activity in flood-prone urban coastal zones.”

On the other hand, the report adds, societies of this region have been under pressure to adapt to water scarcity and heat for thousands of years, and have developed various technical solutions and institutional mechanisms to deal with these environmental constraints.

While global models predict sea levels rising from about 0.1 to 0.3 meters by the year 2050, and from about 0.1 to 0.9 meters by 2100, the World Bank says, for MENA, the social, economic, and ecological impacts are expected to be relatively higher compared to the rest of the world. Low-lying coastal areas in Tunisia, Qatar, Libya, United Arab Emirates, Kuwait, and specially Egypt are at particular risk.

Climate change also poses many challenges to the region’s cities, which represent hubs for economic, social, cultural and political activities. Rising sea level could affect 43 port cities—24 in the Middle East and 19 in North Africa, according to the World Bank study.

“In the case of Alexandria, Egypt, a 0.5 meter rise would leave more than 2 million people displaced, with 35 billion dollars in losses in land, property, and infrastructure, as well as incalculable losses of historic and cultural assets.”