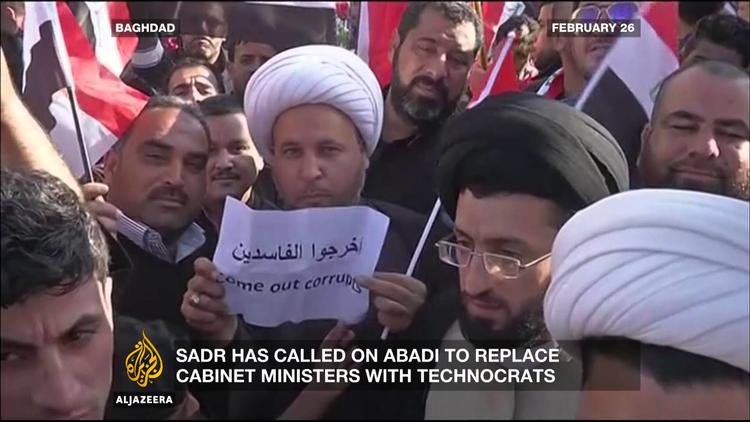 The Shiite political alliance that dominates Iraq is cracking under pressure from the country’s crises. But some who appear to be foes today, may actually be friends once the protest signs have been put away.

The current protests against the Iraqi government are highlighting just how divided the ruling coalition of Shiite Muslim political parties is.

But perhaps this is not surprising. The coalition of political parties with a Shiite Muslim background was forced together in the wake of Iraq’s 2010 parliamentary elections. When it appeared that a less Shiite Muslim-heavy alliance, led by politician Ayad Allawi, might be able to form the government, the Shiite Muslim groups came together to form what is known as the Iraqi National Alliance.

The alliance’s main objective was simply to retain the job of Prime Minister for one of its own. This would be Nouri al-Maliki, who no longer holds that job but who is still a senior member of his State of Law bloc, which in turn remains a member of the National Alliance. And that objective still remains. However since then, other conflicts have arisen and these are now so serious they are threatening to split the alliance up.

Former MP, Izzat al-Shahbandar: There is no political entity called the Iraqi National Alliance. It is only a ceremonial alliance.

It was in 2014 that things really started to go wrong. Much of the Iraqi National Alliance wanted to get al-Maliki out of the Prime Minister’s chair. However because al-Maliki headed one of the most powerful and most popular blocs within the Alliance, this proved to be difficult. It was not until members of his own bloc turned against him, that al-Maliki was able to be replaced with another Shiite Muslim politician, Haider al-Abadi, who is now Iraq’s Prime Minister.

Since then that rift between the different parties and blocs within the Iraqi National Alliance has only deepened further.

At a meeting in Karbala this month between the leaders of the Alliance’s major blocs, no consensus was able to found.

“The divisions within the National Alliance are no longer merely differences of opinion,” Hassan al-Khalati, an MP with the Citizen, or Muwatin, bloc – the political wing of the Islamic Supreme Council of Iraq, led by Shiite cleric Ammar al-Hakim – told NIQASH. “The divisions are having a big impact. The forces within the Alliance have been unable to come out as a unified front, to deal with Iraq’s current crises. This has a major impact when the country is going through such economic and security problems.”

Al-Khalati said it wouldn’t be fair to blame any external forces on the splits within the Shiite Muslim political community. However, he added, “there are certainly those who don’t mind the divisions, for reasons that are both local and regional”.

“From the first day it was formed the National Alliance was intended to be a political grouping that could name the country’s Prime Minister,” explains Salah al-Ubaidi, a leading member of the Sadrist movement and often spokesperson for the movement’s leader, Muqtada al-Sadr. “However after that was accomplished, the Prime Minister [al-Maliki] turned his back on the Alliance and did not deal with the members as though he was part of a group to which they all belonged.”

There are major problems within the Alliance, al-Ubaidi confirms. Members don’t like other non-Shiite political parties and that’s why they want to remain within it. “But internally the Alliance is weak and fragmented,” the Sadrist spokesperson told NIQASH. “Sectarian considerations dominate politics. Anyone who tries to disagree with that is considered a traitor.”

Most recently, al-Ubaidi’s party’s leader, Muqtada al-Sadr, has been supportive of popular demonstrations against the government, where protestors have called for reform and an end to corruption. Al-Sadr has organised his own supporters to stage sit-ins inside the highly guarded Green Zone and he himself is participating. In a recent statement he used an ironic wordplay in Arabic to describe the Iraqi national alliance he is part of: Tahaluf, meaning coalition, and Takhaluk, meaning disagreements.

Al-Sadr has said that if al-Abadi doesn’t carry out promised reforms, he will force him out of office. But in a way al-Sadr, who has mostly supported al-Abadi during his time in office so far, is actually also helping the Iraqi Prime Minister’s plan for reform. The Sadrist politicians are not standing in the way of the formation of a more technocratic, less corrupt government. It is more likely that other parties, such as those associated with the former Prime Minister Nouri al-Maliki and those who promote stronger alliances with Iran, are opposed to al-Abadi’s aims. Despite the threatening words, al-Sadr may actually be helping push for better governance.

There is no political entity called the Iraqi National Alliance, says Izzat al-Shahbandar, a Shiite Muslim politician and former member of one of the Dawa party, one of the parties within it. “It is only a ceremonial alliance and it lacks a real unity. Conflicts started as soon as the Alliance was formed – because the leaders within it have conflicting interests. The irony of it is that what is dividing the Alliance is a conflict of interests – rather than a conflict of ideas.”

There are two things that will determine whether the national Shiite Muslim Alliance can continue. Firstly there is the unofficial sectarian quota system within Iraqi politics. Although it has never been written into Iraqi law, this system was created by US administrators as they set up the country’s new government after the 2003 US-led invasion. In order to avoid sectarian infighting among politicians, the US administrators, thought it best to split the most important positions in Iraq’s new Parliament between the three major ethnic and sectarian groups in the country; that is, the Sunni Muslims, Shiite Muslims and Iraqi Kurdish. Over time though, many analysts believe this practice has come to hamper Iraqi democracy, with leaders being picked for their sect or ethnicity, rather than on merit.

As long as this quota system exists, Shiite Muslim politicians will be forced to stay together in an alliance – especially if they are challenged again, with a question like who gets the Prime Minister’s job.

Secondly the Alliance’s longevity will depend on how big the problems between the different parties get, whether these issues override sectarian concerns. At that stage it will also depend on the willingness of other political actors in Iraq – Sunni Muslim and Kurdish politicians as well as members of the country’s minorities – as to whether they would be willing to enter into new, non-sectarian, non-ethnic alliances.