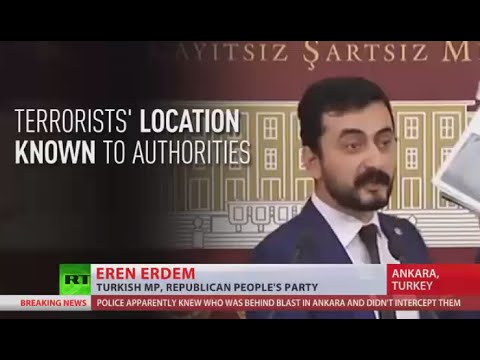 For a long time the Turkish government was accused of assisting the Islamic State of Iraq and the Levant (ISIS) group. These accusations were heard especially since the battle Syrian Kurds fought with ISIS over the town of Kobani on the Syrian-Turkish border almost a year ago.

Turkish forces avoided any action to help the local Kurdish militia to take Kobani from ISIS. This even provoked a higher suspicion that Ankara does not want to fight the brutal Islamic group.

Is Ankara really helping ISIS? There have been reports, photos, and video footage of arms and ammunition being shipped from Turkey into Syria. Some Turkish journalists are even being tried in Ankara for revealing those reports and information. Countries and groups not so sympathetic to Ankara and the Turkish president, Recep Tayyip Erdogan, have been arguing that these shipments were sent to ISIS.

There has been no proof of that accusation, while we know that Ankara has been arming and training armed rebel groups other than ISIS who fight the Bashar al-Assad government — some also considered "radical Islamist" and "terrorist."

The "hardest" proof showing the alleged support of the Turkish government for ISIS were documents showing that ISIS has sold part of the crude oil exploited in its territory to some Turkish citizens, including a few described as "Turkish government employees." We also know that, desperate to exchange their oil for hard currency, ISIS has also been selling crude to some in the Assad government and neither of these cases is enough to prove the direct involvement of either Ankara or Damascus as an institution, or a senior Turkish or Syrian official.

Both ISIS and Kurdish militias hold territories on the Syrian side of the Turkish border.

In the last few months Turkish forces intensified their air and cross-border attacks against ISIS militants. They have been doing the same, even more aggressively, with the Kurdish militant groups that they accuse of being an extension of Turkey's Kurdistan Workers Party (PKK) that has been raging a bloody war against Turkey for the last 32 years.

Turkey is a NATO ally of the West while the Kurdish regional government in northern Iraq as well as Kurdish militia groups in northern Syria (along part of the Turkish border) are the most reliable armed force for the West to fight against ISIS.


But the fact is that unlike in the West, fighting ISIS has never been and still is not Turkey's No. 1 priority — that would be fighting PKK terror and separatism.

Kurdish militant groups also have their own agenda and priorities. But fighting ISIS is not their top priority either. They have used the Syrian civil war to take control of territories inhabited by Syria's Kurdish minority and they are trying to expand that territory at the expense of other ethnic groups. They have even been accused of ethnic cleansing to reach their expansionist goal.

Their strategic goal seems to be to fill the gap of some 90 kilometers of the non-Kurdish part of northern Syria along the Turkish border. Ankara's top concern is that this would mean expanding the Kurdish presence along the entire Syrian border, completing the ground for a "Greater Kurdistan" and even giving them access to the Mediterranean Sea.


Two years ago when the Iraqi city of Mosul was falling into the hands of ISIS, Iraq's semi-independent Kurdish regional government under Masud Barzani delivered some weaponry to ISIS in order to weaken Iraq's central government and later withdrew its troops without fighting the advancing ISIS militants. Hiwa Afandi, the head of the Kurdish region's information-technology department, even tweeted that "Strategically, it is a huge mistake to eliminate ISIS before we are done with Hashd militiamen. They represent a much bigger danger to Iraqis." Hashd is a collection of mainly Shi'ite militia groups that was created to support Iraq's central government.

Add to this mix a few dozen small and big players — countries, ethnic, religious, or political groups with overlapping and contrasting interests. It seems to be a perfect Middle Eastern classic: You don't know who is your enemy's enemy for how long.

Meanwhile, a few nations like Iraq and Syria are dying and the wholesale conflict is threatening to spill over to so far more stable nations like Turkey.