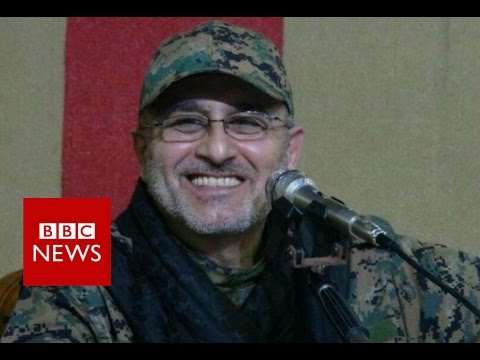 Mustafa Badreddine, the Hizbullah commander responsible for Syria, was killed Friday in an explosion near Damascus. It wasn’t clear whether he was hit by artillery fire or what.

The US now has a tacit alliance of convenience with Lebanon’s Hizbullah against Daesh (ISIS, ISIL), but continues to keep the organization on a terrorism list.

“Lebanese Hezbollah has announced the death of one of its top military commander, Moustafa Badr-al-Din (Mustafa Badreddine), in an explosion near Damascus airport.

According to a statement reported by the group’s Al-Manar TV channel on 13 May, Hezbollah said: “Information coming out of the initial investigation indicate that a huge explosion targeted one of our centres near Damascus International Airport, which led to the martyrdom of Mustafa Badreddine (Al-Sayyed Zul-Faqqar) and the injury of others. The investigation will work on determining the nature of the explosion and its causes and whether it was a result of an air, missile or artillery attack. We will announce further results of the invetsigation soon.”

Earlier, Hezbollah was quoted as saying that Badreddine was killed in an Israeli air strike at Lebanese-Syrian borders.

Badreddine – and three other alleged Hezbollah members – is accused of assassinating former Lebanese PM Rafik Hariri in Beirut in 2005.

(Just to be clear, that bit about Hariri is commentary by the translator, not in the al-Manar report; al-Manar, the Hizbullah mouthpiece, would never say that.)

He was the highest ranking Hizbullah operative to be killed since Emad Mughniya in 2008, who was likely assassinated by Israeli intelligence. If Badreddine was killed in an airstrike, then his demise would also be owing to an Israeli intervention.

In that case, the Lebanese press is asking what kind of retaliation the organization will stage.

Update: Badreddin was killed by artillery fire, by Salafi jihadi forces, Hizbullah now says. That could mean the Saudi-backed Jaysh al-Islam, given where he was killed, near Damascus airport. Russia has been trying to get the latter declared a terrorist organization and remove it from the peace talks delegation, which it now leads. Or it could indicate the al-Qaeda offshot, the Nusra Front or Support Front.

In other words, this death will exacerbate further the severe Iran-Saudi tensions and challenge the current cessation of hostilities that is holding in some of Syria. [End update]

His death came the same week the Syrian government and the Shiite militias fighting alongside its troops lost Khan Touman near Aleppo to a fierce onslaught by al-Qaeda in Syria and its allies. Some 80 on the government side were killed, including members of the elite Quds Brigade of the Iranian Revolutionary Guards Corps.

While some Iranians and Lebanese will be disheartened at the news, others will be reinfused with zeal to defeat the forces arrayed against Iran and the Lebanese Shiites. Lebanese Shiites and other minorities, including many Christians, were terrified in 2014 that Daesh might come into Lebanon and commit genocide against them. They are also generally afraid of the Salafi Jihadi forces backed by Saudi Arabia that are trying to overthrow the Syrian government.

The US has been de facto allied in Iraq with a group that Badruddin helped found, Iraqi Shiite militiamen fighting Daesh.

Badreddin Moustafa likely played a significant role in forcing the Israeli militiary back out of southern Lebanon, which it occupied in 1982 and gave no sign of any willigness to withdraw voluntarily.

Badreddiin was allegedly involved in the bombing that killed Marines in Beirut in 1982 and in bombing attempts on the US embassy in Kuwait in 1983.