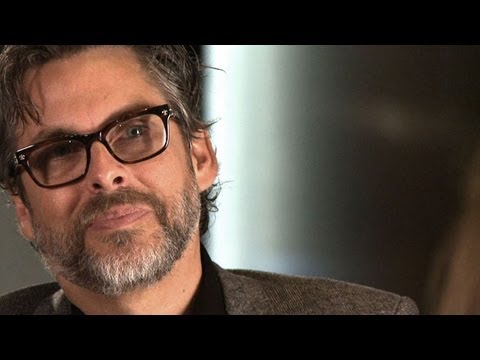 American author Michael Chabon’s Jewish identity has long been central to his work. From 2001’s Pulitzer Prize-winning “The Amazing Adventures of Kavalier & Clay” — the story of two Jewish cousins before, during and after World War II — to 2007’s “The Yiddish Policemen’s Union”, Chabon’s novels have delved into what it means to be Jewish, especially in America.

Like many American Jews, Chabon has also long felt a connection to Israel, visiting the country first in 1992 with his Israeli-born wife, fellow author Ayelet Waldman.

But his most recent visit, which included a trip to the Palestinian territories with a number of prominent American authors, has raised hackles among some in the Jewish state.

Its aim was to raise awareness of the effects of Israel’s occupation of the territories, an issue Chabon says should be of particular resonance to Jews.

“Part of what makes it uniquely horrible for me and what makes it distinct from apartheid is it is being done by Jews. I am a Jew,” he told AFP by telephone after returning to the United States following last month’s trip.

“(For) a people who went through such a horrific, prolonged persecution, to turn around and eventually oppress another people at such a mass bureaucratic level is somehow to me much more dismaying than apartheid — as horrible as apartheid was, and I am not trying to diminish it.”

Chabon’s decision to become involved in campaigning against the occupation was steered by Waldman after a visit to the country of her birth two years ago.

“She felt much more connected at a root level than she had ever expected,” he said. “In a way that was a dismaying moment for her. She felt ‘If I am going to feel at home here, then I also have to take on this occupation.'”

Israel has occupied the West Bank since 1967 and imposes a wide range of restrictions on its 2.5 million Palestinian residents. Several hundred thousand Israelis have also established settlements in the territories which the United Nations and much of the international community consider illegal.

In an interview with Jewish American publication The Forward after the visit, Chabon, 52, described the occupation as the “most grievous injustice I’ve ever seen”.

Picked up by some Israeli media, his comments sparked widespread discussion online and much criticism.

Prominent pro-Israeli social media campaigner Arsen Ostrovsky said on Twitter that Chabon “clearly hasn’t seen much in his life then”.

Author Jack Engelhard, writing for the Arutz Sheva Israeli news website, called his comments “sickening”, saying they smacked of “someone knocked silly from too much American indulgence”.

Many in Israel — especially on the right — bristle at criticism of the country by some American Jews, accusing them of not understanding the daily realities of living in the Jewish state.

But Chabon denied any hostility to Israel.

“This idea of me being an enemy of Israel or hating Israel — I was so biased in favour of Israel, and I think still am on some level, that I was prepared and preferred to ignore it (the occupation),” he said.

“Because that is the only thing you can do if you want to hold on to your support in regard to Israel — you have to ignore it. The government knows that as well, so that is why they are working so hard to hide it and keep people, including ordinary Israelis, from ever having to see it.”

The tour was organised in conjunction with Breaking the Silence, a group that provides a platform for military veterans and serving soldiers to describe what they say are disturbing aspects of their service in operations in the West Bank and wars in the Gaza Strip.

Israeli Defence Minister Moshe Yaalon in March accused the group of treason, after they were alleged to have asked soldiers to disclose classified information. The organisation denied the claims.

Chabon and Waldman will now edit a book written by 25 prominent authors focussing on different aspects of daily life under the Israeli occupation, with the proceeds going to Breaking the Silence and a local Palestinian group.

Chabon — whose last novel “Telegraph Avenue” was released in 2012 and who wrote lyrics for more than half the songs on Mark Ronson’s last album — is the latest in a long line of cultural figures that have come out either in favour or against Israel’s policies.

Artists such as former Pink Floyd star Roger Waters have called for new measures against the country, but Harry Potter author JK Rowling has opposed a cultural boycott.