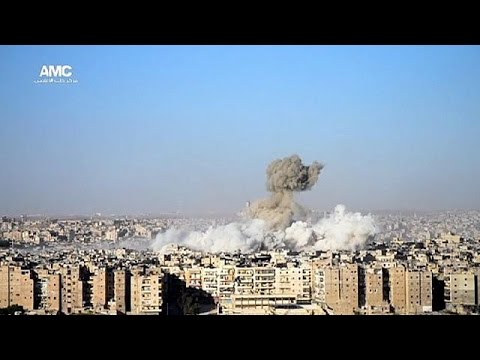 Question: Germany’s Chancellor Angela Merkel has voiced criticism over the airstrikes carried out by Russia in Syria, leaving the impression that relations between Russia and Germany have deteriorated. How can they be improved?

Sergey Lavrov: I cannot recall Germany’s Chancellor Angela Merkel ever highlighting efforts by the Russian Aerospace Forces in combating terrorism in Syria, which came about at the request of its legitimate Government.

Western Europe wants to see the Baath government of Bashar al-Assad unseated, because it is a seedy one-party state and guilty of massive war crimes. Merkel was speaking for many in the EU in this regard, but not all. Czechia, for instance, sees the Syrian opposition as, if not al-Qaeda, the next thing to al-Qaeda, and so is supporting al-Assad.

Lavrov, like Czechia, largely views the opposition through the lens of radical Muslim terrorism, a phenomenon that threatens the Russian Federation in Chechnya and elsewhere (Over 9 million of Russia’s 143 million population are Muslims, and they are set to double in the coming decades). While many of the best fighting groups in the opposition are in fact Salafi jihadis (hard line holy warriors), not all are– many units grew out of the Syrian Muslim Brotherhood. Admittedly, the liberal democrats of 2011 are largely gone from the battlefield.

So in any case, Lavrov is playing the terrorism card here against Merkel’s criticism– saying that Moscow deserves Germany’s gratitude for stepping up to deal with al-Qaeda, Daesh (ISIS, ISIL) and other groups that could ultimately pose a danger to Germany itself.

The terrorism card has the unpleasant side effect of justifying the “collateral damage” or killing of innocents that stems from Russian and Syrian government bombardments. The Russians have been particularly hardhearted about al-Assad’s targeting of hospitals in rebel-held East Aleppo.

“By the way, Russia is the only country that has legal grounds for fighting terrorists in Syria. The presence of the US-led coalition there is illegitimate. I have told our US partners more than once that they are making a big mistake. They should have obtained consent from Damascus or turned to the UN Security Council, just like they did when they asked the Iraqi Government for permission. If this happened, I’m confident that we would have been able to agree on a UN Security Council resolution that would suit both the US-led coalition and the Syrian Government, since this is scourge for all of us.

The fact that the US-led coalition is operating in Syria without any legal grounds is indicative, first, of its arrogant stance claiming that the rule of President of the Syrian Arab Republic Bashar al-Assad is illegitimate. Second, it shows that it wants to have free reign so as to use the coalition not just to attack terrorists, but also possibly for attacking the Syrian government forces in order to change the country’s leadership, as it happened in Libya. We are not aware of any official planning to this effect, but every now and then such ideas surface, and this is what they desire. We have to be vigilant.”

These passages show an attachment to Bashar al-Assad not always in evidence (the rumors are that Moscow tried to force him out at one point). They suggest that Moscow, after a period of hesitation, has now decided to keep al-Assad in power. Some of the impetus for this decision may be a concern that if he steps down, Syria will go the way of Libya, which was the worst of all possible worlds for Russia. The Russians lost a sphere of influence to NATO, and then the Mediterranean became less secure, with hard line Muslim radical groups arising and taking some territory.

Lavrov’s idea that the US and Russia could have worked something out at the UN about the shape of a US intervention is pure fantasy and a misrepresentation of the former Russian position, which was against any foreign intervention but its own. Russia has a UNSC veto.

As for legitimacy, many countries around the world do not see al-Assad as having it, given his massive war crimes (so systematic that they probably amount to crimes against humanity).

Russia’s position regarding Syria is clear. We value the agreement to create the International Syria Support Group (ISSG). This is a unique format since it brings together all key outside actors, including Saudi Arabia and Iran at the same negotiating table.

This is telling in itself, because these two protagonists embody the antagonism within Islam between Sunnis and the Shia. Deepening this divide would be very dangerous. In all our interactions with our partners in Saudi Arabia, Iran and other countries of the region, we constantly seek to promote dialogue, for example in the Persian Gulf region, so that Arab countries and Iran create some kind of a confidence-building mechanism and move in this direction step by step by taking relevant action. So far, this has been very challenging. However, we strongly believe in the need to address not only specific issues related to one conflict or another, but also to be mindful of the need for principled and system-wide efforts to help Arab and other Muslim countries reach compromise instead of preaching holy war between different parts of the Islamic world.”

Russia is attempting to mediate between Saudi Arabia and Iran, just as President Obama is. Both Washington and Moscow are resented by the Saudi elite for this stance. But Russia is far closer to Iran than is the US, and the US far closer to Saudi Arabia. For all of Washington’s supposed rapprochement with Iran, in fact it is still heavily sanctioned and boycotted by the US and in contrast the US does enormous business with Saudi Arabia, has joint military maneuvers, and cooperates on strategy. Neither of The superpowers can really be an honest broker here because each has a dog in this fight.

Lavrov’s talking points are disappointingly propagandistic. The legitimacy of the al-Assad government is in profound question. It isn’t fair to dismiss the entire opposition as terrorists. Russia’s stance on rejecting condemnation of the regime for bombing doctors and patients in hospitals is horrible. And Russia can’t get Iran and Saudia together if it is strongly a partisan of Iran and al-Assad. But there we have a little window into Moscow’s mindset here, which we seldom get in the US press.

Euronews: “Russia will not ask Syria to halt air strikes on Aleppo”