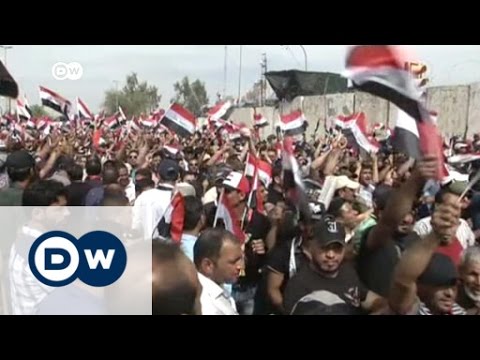 Baghdad is under a state of emergency on Sunday a day after members of the Sadr Trend stormed the Green Zone and invaded the parliament building, briefly imprisoning parliamentarians in the chamber (and some in a basement) before letting them go. Some apparently were beaten as they left. Most of the protesters, though, were relatively peaceful and had been ordered to avoid violence by their leader, Muqtada al-Sadr. As at Tahrir Square in Cairo in 2011, of which the invasion of the Green Zone was a distant echo, they chanted “peacefully, peacefully” ( silmiyyah, silmiyyah).

When George W. Bush invaded Iraq in 2003 he established blast walls around central government offices, establishing a four square mile Green Zone (i.e. one that was safe and which the US controlled, with the rest of the country being a Red Zone; more or less, that situation never changed). The parliament building and Western embassies were in the Green Zone. I visited it in 2013. You enter through a narrow entranceway and can only really go in by foot (this measure stops car bombs from getting in). The security people who checked us in were international– Ghana and Peru or something. I doubt they would die for the cause. There were Iraqi troops on the outside of the blast walls. Apparently some of them sympathized with the Sadr Trend and let the crowd pull down a couple pylons of the blast wall, after which they streamed in.

Who were the protesters? The Sadr Movement is particularly popular in East Baghdad or Sadr City, a dense slum where a plurality of Baghdadis live. The father of cleric Muqtada al-Sadr, Muhammad Muhammad Sadiq al-Sadr, was assassinated by Saddam Hussein’s secret police in 1998. Young Muqtada survived underground. He reemerged in 2003 to oppose the US military occupation of his country, forming the Mahdi Army, which more than once fought US troops. His was a movement of the poor and the street. After the US withdrew, al-Sadr adopted a lower profile. But now that President Obama has reestablished a US military command in the country, al-Sadr has come back out to protest the renewed US presence and the al-Abadi government, which the US props up.

What were they protesting?

Now that Andrew Jackson is being taken off the $20 bill and his demerits and virtues are being debated, the spoils system is back in the news. He made enormous numbers of promises to his supporters about the goodies they would get if he won the 1828 election. He came in firing an unprecedented number of people from government jobs and filling those positions with member of his party. Win the election, you get the spoils.

A sitting President, James A Garfield, was assassinated in 1881 over the spoils system (his assassin had supported the party but wasn’t rewarded as he thought he should have been).

Not until the Pendleton Act of 1883 was a nonpartisan civil service commission created, and the spoils system began to decline at least a bit. (In today’s US government, sometimes the SES positions above GS-15 are given to political appointees, and of course the cabinet and sub-cabinet slots are all filled by political appointees; but this is a thin sliver of the upper bureaucracy, whereas most people who work in government offices have a career unaffected by the party in office).

So how is all this relevant to the storming of the Iraqi parliament?

The Bush administration in its years of military occupation of Iraq presided over the installation of an Iraqi spoils system more rowdy and rapacious than anything Andrew Jackson ever imagined. The Bushies and the UN put a parliamentary system in place, so that the parties that form the biggest coalition in the national legislature get to put forward a prime minister, who is appointed by the president. That prime minister then appoints a cabinet, with most cabinet ministers overseeing a ministry. The cabinet appointees came from the parties supporting the prime minister in parliament. Thus, the minister of housing might be from the Da`wa Islamic Party (the Islamic Call or Mission Party), a Shiite fundamentalist group drawn from what’s left of the Iraqi middle class and typically led by laymen rather than clergy. The Ministry of Labor would then be packed with members of the Da’wa Party.

Some of this spoils system is rooted in the Debaathification drive of Ahmad Chalabi, Nouri al-Maliki and other Shiite political entrepreneurs who wanted to fire Sunni Arabs from the Iraqi bureaucracy after the fall of Saddam Hussein. They tagged anyone who belonged to the Baath Party as unsuitable for government service, even down to school teachers. And, it wasn’t just members of the party but people who had relatives who were members of the party. Most Baath Party members committed no greater crime than conformism (or maybe they wanted to travel; you had to be a member to get a passport). So Chalabi et al. got rid of some 100,000 Sunnis from their government jobs at a time when the Bushies ran the Iraqi state factories and other state-owned companies into the ground because they didn’t believe in “socialism.” So the Sunnis were just made unemployed.

When Nouri al-Maliki reigned as Prime Minister 2006-2014, his spoils system became ever more corrupt and exclusive. The Sunni Arabs of Iraq were almost entirely excluded from spoils. Members of al-Maliki’s Da’wa Party got fabulously rich off the country’s oil income. The corruption of his officer corps led directly to the collapse of the Iraqi army at Mosul in 2014, allowing Daesh (ISIS, ISIL) to take over 40% of the country. The sense of deprivation of the Iraqi Sunni Arabs who cooperated with Daesh also drove these events. You couldn’t say he was a successful prime minister.

Iraq is what is called by political scientists a “rentier state.” That just means that the government gets an income (or “rent”) from external payments (in this case foreign purchases of its petroleum). Rentier states famously don’t really need their people so much. In ordinary states like the US, a lot of politics is about how much the government will tax the people, and who will get the benefit of government services. In a Rentier state, there are no taxes. Politics is about how much the state officers have to share their bonanza with the people. Wise rentier states share liberally. Iraq’s elite is not wise.

Al-Maliki’s successor, Haydar al-Abadi, was, like al-Maliki, a leader of the Da’wa Party and continued the spoils system. Other parties complained that Da’wa got the lion’s share of lucrative ministerial appointments (and therefore that the party’s members got the good government jobs).

Muqtada al-Sadr’s al-Ahrar Party (Party of the Free Ones; people complained when I called it the Liberty Party but that is what it amounts to) gained 36 seats in the 2014 parliamentary election and was given 3 cabinet seats. These appointments did not give the Sadrists much patronage.

But al-Sadr has only a tenuous relationship to the party, anyway. His power base is the poor Shiites of the slums, in East Baghdad, Amara, Basra and elsewhere in the Shiite south. Although Iraq is an oil country, you couldn’t tell it by looking. I was there in 2013 and was shocked by how decrepit everything was. It was like a third world country, not like Dubai or Doha. I wondered where all that oil money could be going. If I wondered that, imagine what the slum dwellers think.

So beginning last summer the Sadrists began saying they were mad as hell and weren’t going to take it any more. They accused the party officials heading the ministries, along with many of the parliamentarians of essentially embezzling the country’s vast oil wealth.

By February al-Sadr had presented an ultimatum to al-Abadi to abolish the spoils system by appointing a technocratic cabinet. That is, the minister of health would be a high powered physician or hospital administrator, not a Da’wa Party hack. Sadr brought 200,000 people into the streets of downtown Baghdad demanding this outcome. It wasn’t only al-Sadr making this demand–many members of the smaller parties who felt that al-Da’wa had gotten greedy joined in.

Al-Abadi at length acquiesced and presented a list of technocrats to head ministries. But cabinets have to be approved by parliament. When the speaker of parliament looked like he would go along with al-Abadi and al-Sadr, the parties that dominate parliament voted to remove him and replace him. They weren’t giving up their spoils so easily. But others in parliament did not accept this parliamentary coup, so there are now two speakers of parliament.

The members of parliament are so busy with other things (including international travel and residences abroad) that they can’t easily get a quorum together to vote on al-Abadi’s technocratic cabinet, and it is not clear he could muster a majority for the measure. Parliament was trying to meet on Saturday when the angry people of the slums and run-down middle class neighborhoods made a breach in the blast walls around the Green Zone, which surround the parliament building and Western embassies, keeping them safe.

The Sadrists among them accused the parliamentarians of being thieves and of neglecting services for the poor. They also resent Iran’s influence with the al-Abadi government, and some chanted against Tehran from the floor of parliament.

Al-Abadi is trying to reestablish order and has declared a state of emergency.

But you can’t imagine parliament forgiving him for presiding over this attack on their security, and some doubt he can remain prime minister. More important, the conflict brings into question the whole architecture of Iraqi governance put into place under American rule in 2003-11.

While this uprising of poor Shiites may seem a distraction to Americans of the fight against Daesh in the Sunni north, both situations derive from similar inequities. The spoils system deprived the Sunnis of a fair share in the oil wealth, just as it deprived the Shiite slum dwellers. The Sadr Trend’s relatively peaceful but dramatic breach of the Green Zone and the surrender of the Mosulis two years ago to Daesh are both protests of the deprived against the fat cats.

American pundits will find a way to make all this about sectarianism or Shiism or Islam. It isn’t. Much of what is going on in Iraq is a form of class struggle. It turns out that Neoliberalism and the Rentier State haven’t, as some imagined, made Marx irrelevant. But it is also true that some of the work the Communist and Baath Parties used to do in Iraq back in the 1960s is now being done by al-Sadr’s brand of puritanical slum Shiism.